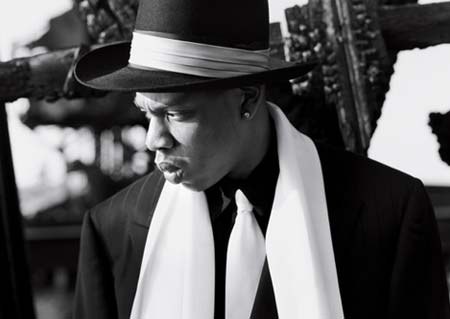 All Reasonable Doubt samples in one zip: here. All posts rolled into one: here.  Dan Love runs this fiefdom: here.

From Has Arrived (Soul International, 1976)

The relationship between Jay-Z and Big Jaz extends well beyond this contribution on Reasonable Doubt. The mentor to a young Sean Carter in the late ‘80s, Jaz released the classic, “The Originators” in 1989, providing Jay with his first taste of the spotlight seven years prior to seeing a full-length release.

Featuring Foxy Brown and earning prominent product placement on the surprisingly solid, Nutty Professor SDTK, “Ain’t No Nigga’ was the most commercially successful single from RD, charting at 50 on the Billboard Hot 100 and topping the Hot Dance Music/Maxi-Singles Sales. Thanks to a shared sample source from The Whole Darn Family’s “Seven Minutes of Funk,” comparisons with EPMD’s ‘It’s My Thing’ are obvious. Incorporating two distinct two-bar sequences from the source material, Big Jaz’s manipulations are limited, but given the song’s stripped down aesthetic, too much fiddling would have destroyed the addictively funky groove. With an interpolation of the Four Tops’ “Ain’t No Woman (Like The One I Got)” inspiring the hook, “Ain’t No Nigga,” attests to the clean and simple aesthetic that threads much of Reasonable Doubt.

Another semi-interlude, “Friend Or Foe’s” only shortcoming stems from its brevity–just a minute and a half, it’s vintage high-impact, rewind-this-tape, Premo. Out of his three contributions, “Friend Or Foe” is the most quintessentially Premier, complete with grave-faced groove and body-rocking drums. The booming horns come care of Wood, Brass & Steel’s Hey What’s That You Say,” a cover of the legendary Skull Snaps’ song, “It’s A New Day,” whose drum break is amongst the most widely used in sample history.

Jacking the first few bars and looping them for Jay, horns and wah-wah guitar glide  together over a meticulously constructed drum track, with interesting flourishes on the hi-hats, and carefully distributed triplets and open hits that create the beat’s jaunty bounce.

Eddie Henderson – ‘Inside You’

Though, nowadays, Clark Kent is probably known for his Air Force 1 obsession as much as his production mastery, “Coming Of Age” undeniably proves that the man should be as highly regarded as his more oft-praised peers. Beautifully structured and highly atmospheric, “Coming is Age,” is completely disparate from the champagne and caviar crunch of  “Brooklyn’s Finest,” delineating his ability to craft works variegated in both texture and tone.

Re-configuring his copy of Eddie Henderson’s Heritage (Blue Note, 1976) Clark utilizes a pair of two-bar sections from “Inside You.” “Coming Of Age”  doesn’t feature much sample-chopping, with its core piano and synth parts remaining intact, but the production’s finesse is revealed in small flourishes–the reverb applied to the snare hits during the verse sections, the spare but expertly built opening four bars that precede the main beat drop. For Clark Kent, it’s all in the details. Maybe that explains the sneaker obsession.

Hamilton Bohannon – “Save Their Souls”

The last Clark Kent contribution, the production technique on “Cashmere Thoughts” is unsurprisingly similar to the others–a mixture of loops and chopped sequences forming the foundation of the groove, with minute details coloring it with depth.

While Hamilton Bohannon ultimately embraced disco, “Save Their Souls,” finds him in ice-cold funk mode, with grit replacing glitz and glamour. Kent loops a meager four bar section near the beginning, incorporating the distinctive guitar track plus some interesting percussion. In the verses, a refined chopping ensures that the texture remains varied and momentum perpetual. Ultimately, it’s these subtle shifts in the beat that make “Cashmere Thoughts” so compelling, and Superman out of Clark Kent.

Well known for his orchestral inclinations, “Bring It On” allows DJ Premier to indulge his symphonic and cinematic side. More noirish in tone than his other RD contributions,  the medley of strings and sax stabs produces a sumptuously rich and incredibly spacious soundscape.

Several Premier samples remain an enigma and “Bring It On” is on that list, as source information remains highly elusive. Unlisted in the liner notes, it’s likely that it’s extremely obscure , although the sample vibe would indicate that it’s lifted from a soundtrack or classical composition. In this information age, it seems impossible that Premier’s kept things so close to the vest, but it’s assuring to know that the furtive nature of diggers can still be, at least, somewhat preserved.

From How To Beat The High Cost Of Living OST (Columbia, 1980)

“Regrets’” efficacy stems from not only Jay-Z’s musings on the nature of regret, but also from the wistful nature of the beat. Produced by little-known Peter Panic, an affiliate of Clark Kent’s Superman Productions outfit (read the liner notes, dunny), the plush Rolls-Royce ride of ‘Regrets’ belies Peter Panic’s legacy as a footnote in hip hop history.

The sample is lifted from a collaboration between Hubert Laws and Earl Klugh for the How To Beat The High Cost Of Living SDTK (Columbia, 1980). Though both were significant players in the CTI back catalogue and frequently collaborated with the legendary Bob James, the song is by no means their best work, verging dangerously towards corniness. It’s quasi-elevator music, yet its opening is marvelously atmospheric, with organ, triangle hits and Klugh’s guitar screaming out to be sampled. Panic’s success with ‘Regrets’ lies in how he combines these elements with a well-defined drum track, striking an equilibrium with the other components of the groove.

It’s trite but not entirely wrong to reflect back on seminal works like Reasonable Doubt, and offer a hoary, “they just don’t make them like they used to’” diatribe. But it’s certain that hip hop won’t see another album exactly like this, especially in terms of production–thanks to the continual legal and fiscal restraints shackling producers.

But one shouldn’t dwell on that, but instead remember that for all the (rightful) praise heaped on Jay-Z’s vocals, its classic status would be dubious were it not for for the outstanding work of his producers. The perfect marriage of beats and rhymes, contemporary artists would be well-served to note how this symettry can yield something as timeless as Reasonable Doubt.