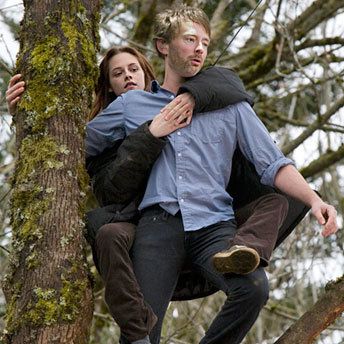 Following a spate of reports from several attendees at Thom Yorke’s recent solo set at the Echoplex last week, the Vatican has created a commission to investigate reports of celestial visions and miracles performed, including a Los Angeles native who claimed that Yorke’s celestial wail and boisterous dance moves miraculously cured his gout, rickets, and anemia of funk.

According to attendees, the unexplained phenomena occurred shortly after Flea started slapping his bass and Yorke unveiled a host of gumby-limbed dance moves learned following a careful study of Soul Train VHS tapes from 1981-1983.

“When Thom announced that he had spontaneously decided to play a warm-up show that had been planned for three months, I knew that I’d better start waiting outside,” said Joseph McGillicuddy, a 23-year old shepherd from Barstow, who was stunned upon hearing of the invention of Ticketweb.

“But the true magic didn’t occur until the third song. Flea and Thom were both shirtless and as thrilling as that was, I was most intrigued by a bespectacled girl in an all-white American Apparel pantsuit. She was hovering above Thom’s head. At first, I thought she was a groupie, but then she spoke to me:” I promise to make you happy not in this world but in the next.” Presumably, this means the next world won’t have copies of Hail to the Thief.”

Though McGillicuddy was the only attendee to see the Marian apparition, he wasn’t the only one to report paranormal phenomena. During the performance of “Black Swan,” Jane Sherpa, a library scientist from Los Feliz, reported seeing a black swan levitate and transpose itself with the body of Yorke.

“It was the most beautiful swan that I’d ever seen. He propositioned me and asked me if I’d like to go back to it’s hotel room later that evening, but before I had the chance to say yes, it vanished into thin air. The most frustrating thing was that swans mate for life. Now I’ll never find a husband.”

According to a spokesman for Pope Benedict XVI, the pontiff prefers Springsteen, U2, and Enya, to the melancholy stylings of the British legends. However, James Mervyn, the mouthpiece for the spiritual leader conceded that the spiritual leader is taking these reports very seriously.

“After Madonna named her daughter Lourdes, Pope Benedict sank into a deep despondency at such a blasphemous gesture, swearing himself off all pop music and taking solace in the 12th Century Franciscan Chants–that real underground shit,” Mervyn said. “However, his spirits were elated at the reports of potential miracles, to say nothing of the new conversion potential in the mustache and mustache-related demographic.  Besides, even his excellency admits that he was surprised how good In Rainbows was.”

Yorke refused to comment upon the alleged miracles, while Flea delivered only the terse statement to “suck my kiss.” However, Darlene Langhorne, a 19-year college student/blogger/photographer/videographer/Twitterist/poet, produced potential evidence to Passion of the Weiss representatives–a photo taken on her iPhone, showing Yorke surrounded by a luminescent white halo. Cynics have pointed out that the possibility that Yorke may just be unnaturally pale.

The Vatican Commission is slated to arrive in Los Angeles tomorrow, where they will stay at the W Hotel to investigate and eat club sandwiches for the duration of October. In the interim, pilgrims have already begun tearing chunks of sacred concrete and scooping handfuls of loose gravel out of the parking lot behind the Echoplex and selling them on eBay.