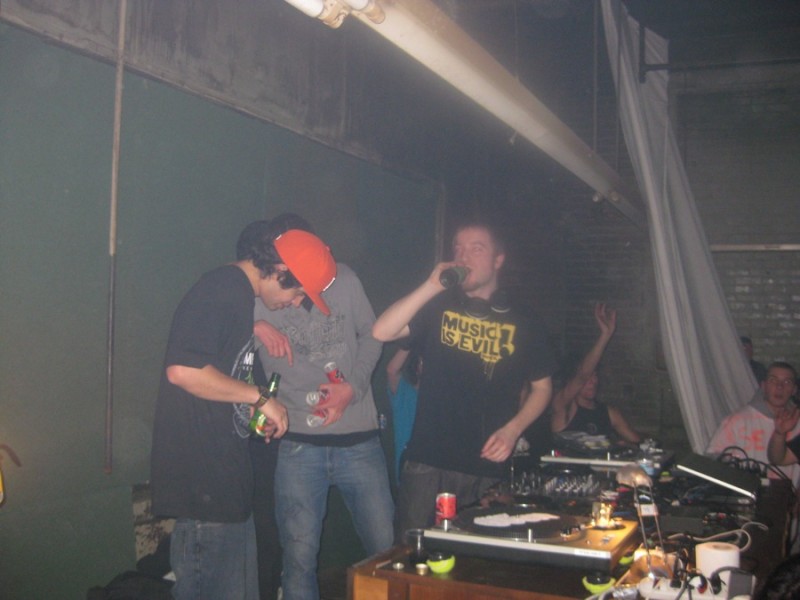 Sach O’s new years resolution was to get out more and to be the last music writer to have never signed up for the ILM message board. So far so good.

Shocking revelation: I try to avoid reading about music on the Internet. Obviously, I still consume more online music criticism than is acceptable for a well-rounded human being but that’s the price one pays for trying to find new tunes. Beyond the daily search for tracks and the more detailed writings of a few select individuals* however, I avoid reading about records like I avoid watching Glee. Hip-Hop discourse has reached new intellectual lows, rock is a circle jerk of bespectacled twats playing “spot the influence,” and I have yet to see even the slightest correlation between critically-approved electronic music and stuff that actually makes people dance. Case in point: here’s the top 5 things “killing dubstep” according to the Internet:

Good news online music reading community: I saw all of the above at Datsik & Excision’s show last month and the sky didn’t fall. Take it from someone who’s seen rap go from “NY State of Mind” to “Empire State of Mind”: this genre still seems fairly healthy. Granted, I understand the lingering critical fear that Dubstep is one LFO-riff away from descending into Drum & Bass level self-parody but bass music still features an astounding variety of sounds and getting angry at the fact that a relatively low-brow one has surpassed the others in popularity is both naïve and childish: why not protest McDonalds while we’re at it?

Delivering 3 hours of grinding, metallic riffs in a dark warehouse full of ravers high off their kites, Datsik & Excision were fun, unpretentious and unrelentingly aggressive. In other words, just what the audience demanded and the exact opposite of what the well-heeled music fan is supposed to enjoy. And God bless them for it: after a decade where rock was robbed of all testosterone and rap acts have become unable to drop a single devoid of R&B vocals, it’s a relief to hear new releases that attempt to get some adrenaline pumping. Yes, it got to be a bit much and it wasn’t my favorite event of the month by any stretch of the imagination, but it was definitely a good night out and it made all the anger directed at “brostep” seem incredibly petty. So rock on guys: 600+ smiling college kids can’t be wrong. Well, unless they’re at a Dave Matthews Band show.

On the other side of the spectrum, Sub Swara was strictly for the heads. Going down at the single best venue I’ve ever had the pleasure of attending in Montreal, the show epitomized the “small, dark room” theory: this stuff is at its best in a grungy, graf tagged basement with a wall of subs, minimal high-end and cheap beer. My first thought was to win the lotto, buy the place, get it up to code and open it up as my own personal club with a dress code that bans both extra-medium t-shirts and any ironic use of neon. Seeing as that probably won’t happen I can only urge promoters to book it again.

When I previewed Sub Swara for this site, I honestly had only the slightest idea of what their show would sound like given that their Podcasts are DJ sets and their live act is all original material. Well, the results are in and I’m happy to say that you should all check them out when they pass through your town: think banging mid-tempo beats with an array of eastern influences. Melding Indian instrumentation to the block rocking beats of the RUN DMC era, the crew was a refreshing change of pace, coming off like a funhouse New York version of California wonky with boom-bap rigidity taking the place of post-Dilla drum patterns. Additional shout outs go to the all-star opening lineup including Intoccabile’s future Garage, Vipond’s whip-smart selection and organizer Living~Stone’s early-morning set whose specifics were unfortunately lost to me in a haze of Pabst Blue Ribbon. Suffice to say, this one wins for best overall line-up.

From the dark basements of undisclosed locations to the glitz and glamour of Koi Bar! Construct & Vilify’s Bassdrive Wednesdays have been going on at this St-Laurent spot for nearly a year now and they kicked off their Anniversary Month in style with “The Ambassador” Joe Nice coming in from New York to play an exclusive set of dubs. Fittingly for the classier environment, the tunes veered away from ravier extremes hitting a sophisticated note without ever falling victim to politeness. The key word was groove: this was one of the most danceable sets I’ve hit up in a long while, pacing itself from slow groove skanking to night-ending buckouts. One of the few big Dubstep DJs who doesn’t produce, Joe Nice separated himself from the pack through an impeccable selection of unreleased dubs, keeping the crowd in the palm of his hand from beginning to end. I think the only people who weren’t having it on the dancefloor were the ones crowded around the DJ booth watching the man work his magic (I won’t front: I eventually joined them). Unbeholden to any style or selection, Joe Nice proved that he didn’t just become the US Dubstep king by being first, he proved it by living up to his last name.

Finally, I was going to hit up Rusko at Igloofest, an outdoor electronic music festival sponsored by the City of Montreal and the good people who throw down Piknik Electronik in the summer but the -32 degree weather kept me indoors. Let’s face it: when the DJ tweets that his cup of hot wine has frozen solid on the DJ booth, you might want to reconsider going out.

Special shoutouts go to Boudah Slinky Productions, Dig.it.Al, Intocabille, Living~Stone, Vipond, Vilify, Construct, Victor Hacala and all the other DJs and promoters for making it happen and apologies to the shows I couldn’t review: day jobs are a motherfucker. Next month promises to be just as intense with shows by Shackleton, Razor Rekta, Nosaj Thing, Daedleus, Vaski and probably 5 or 6 more that I’m forgetting. As always, support good music and if any of the above pass through your town go out and see them: you won’t be disappointed.