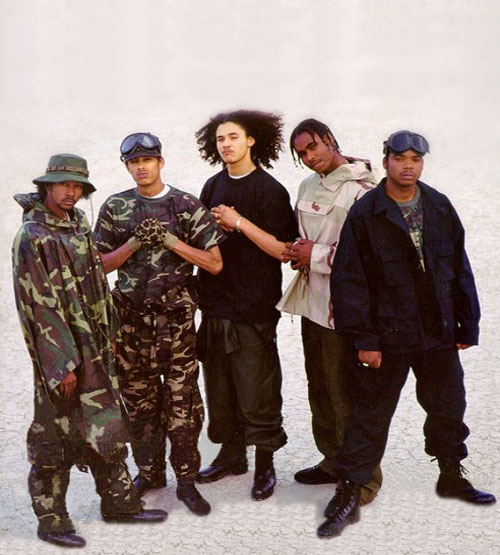 Back in the halcyon days before daily blogging burdens meant that I could devote seven-day stretches to waxing rhapsodic about the merits of Cleveland fast rap, I devoted an entire week to Bone Thugs-N-Harmony (this is what the search option to your right is for). There are obviously other contenders, but for my 4-0 and bag of reefer, hydro, they are one of greatest groups of all time. After all, there is a reason why they were the only people to collaborate with 2Pac, BIG, Big Pun, and Eazy E – and it has nothing to do with their love of Ouija. Not even ODB was capable of writing a better song about the joys of welfare checks. They were so special that they could make great songs about popping ex pills and being a ghetto cowboy — stick that in your corn-cob pipe and smoke it, Mario Van Peebles.

Reunited for the first time in over a decade, thanks to Flesh-n-Bone’s lengthy incarceration and Bizzy Bone’s conviction that the secret to life was chocolate chip cookie dough and crying doves, Bone have a new album out on Warner Bros. The album is hit or miss, featuring equal parts otherworldly tongue-twisting raps, stoned Gospel spirituality and a couple awkward attempts to adjust to the contemporary pop sound.  Basically, it’s the sort of album you’d expect them to make in 2010. Should you have the chance to catch them live, I cannot recommend it enough — absurd virtuosity, harmonies, and an hour and a half worth of hits. But enough babbling. The interview and article with Flesh is up at Pop & Hiss. New Bone Thugs and their oft-forgotten Big Pun collaborations below, and excised interview quotes after the jump.

MP3: Bone Thugs-N-Harmony – “Only God Can Judge Me (Left-Click)

On striving for lyrical depth and the Bone Thugs style:

We’re always 100 percent Bone Thugs-N-Harmony and our music always has a meaning, period. We make music that comes from the heart, and that’s in everything that we talk about. It might be fast tongue-twisting rap with harmonies, but there’s a deep message and spirituality that makes Bone Thugs Bone Thugs. Our fans are quiet intimate with our music, and sometimes they might not thoroughly understand the creative process — they just want good music from their favorite hip hop artists. But they have to keep in mind that we cross all boundaries and barriers — we topped the Beatles with number one hit single sales. We were always making pop records — we did it with Thuggish Ruggish Bone. That was a street song but it was also a pop record because of Shatasha. We were one of the first ones to do that combination successfully.

Can’t nobody question whether or not we’re not staying street. We’ve always touched on other topics, whether it’s dealing with moms and pops, the welfare situation, injustice in the street, what’s going on in Guam or what’s going on in Haiti. We’re street reporters and we talk about these things — we think of ourselves as voices of the people so there are no limitations to the music. People hear an up tempo music and they think Bone is trying to conform. Bone is always the group that shaped the pop sound, and now what you herar in the industry is what we were doing in the  mid 90s. Now every record company is trying to get them to sound like that — the whole industry wants people doing gangsta shit that’s pop, but that’s what Bone Thugs always did. Whether people acknowledge that or not,  the facts speak for themselves.

When a new fan discovers Bone off the Internet, they have their homework cut out for them — that’s how extensive our catalogue is. We take them through every phase of life and spirituality as well, we try to reach the people even if we’ve got to talk about the gangbanging in the streets too.

We’re trying to let people know that there’ s better way. When a fan comes up to me and says your music helped me make a better decision, or pursue a better path, that lets me know that God put it in me, and that we’re doing a better thing.

On the difference between depicting street realities vs. glorifying them:

Bone Thugs have always been about a depiction rather than a glorification. When people say rap or hip hop is disgusting, 90 percent of them are going at the songs that say how pretty a watch is or how big the booty, and that’s the wrong type of glorification. If you can talk about dealing with some aspect of the club that’s not often discussed, than you’re writing something bonafide.  A lot of rappers today are reckless, closed minded and ignorant. You don’t have a lot of educated well spoken lyricists today, and that’s one of the reasons why Bone Thugs is still popular.

Faces of Death had just been released that summer, and we felt like we’d accumulated all the local fame we could get, so it was time to spread our wings. We’d had a brief visit out to LA and saw the networking out there and thought that it was where we needed to be to branch out in the music world. The scene was popping there — we figured it was a mecca of the industry and that we had to move to LA or New York.

We talked to Eazy on the phone first and auditioned by spitting flows ove the phone, and then we figured we had to meet him in Cleveland. So he was on tour at the time and we wanted to open up for him, we got to do so, and linked up with him there, and it was on from there.

Eazy has stayed in the consciousness because he always gave it to you raw and uncut. He was successful at everything he did, and those on the outside hoped that we wouldn’t succeed. He was the underground in the real sense and in his music. He was an outspoken dude that made really powerful music.  You’ve got to give him props as an originator the way you have to big up Jammaster Jay, Pun, Biggie, ‘Pac and the list goes on. Eazy E was the West Coast king.

On developing their unique style:

I have to be 100 percent honest and admit that we do have our major influences — we can go back to Michael Jackson, all the way through Al Green, James Brown, the Grateful Dead, Led Zeppelin, Bob Marley, The Last Poets, Grandmaster Flash, through the new school dudes Run DMC, Beastie Boys, Fat Boys, the NWA camp — Cube, D.O.C. Ren; Slick Rick, Big Daddy Kane…

When BNTH formed, we’d been rapping all of our lives — I wrote my first rap at 9 years old. We’re all family. Layzie is my brother, Wish is my cousin. Bizzy and Krayzie are my brothers and best friends.  We were young when we first started doing the rapid fire, but we always had a unique sound about ourselves — there were some fast rappers that inspired us but we came alonh and took a twist to fast rapping in that we started singing. And we weren’t only fast rapping but we were tongue twisting. What happened was Krayzie had to do a two year bid in prison and when he came home, he brought this rapid fire syllable for syllable and we all ran with it. Twista came out around the same time, but we was in different spots — he was tongue twisting and so were we, but we was singing and harmonizing too.

On who invented the tongue twisting style:

We got a little flak and had a lot of beef.  We were responsible for introducing the style, we invented it and are still trying to invent on it. We have a song on this new album where we try this new thing  — of course, there’s nothing new under the sun — but basically, we share verses trying to chain rap.  We call it “the universe,” and instead of traditional 16-bar verses where one artist does a 16, all five of us break it down word for word, back to back, and at the same time we harmonize with it.

I’ve never heard any of their music before. The name rings a bell though.

On their beefs with Crucial Conflict and other rappers:

We were teenagers then and we were all wild. Crucial Conflict was saying a lot of sideways things, and got to the point where Bone Thugs had to address them face to face and all that other  — whether it was a boxing match or whatever it turned out to be. But when we met them we had a smoke, we said let’s have a drink and maybe we can be buddies. Today we have a beautiful relationship with Twista, Ludacris and Tech NY9E, where at one point there were some discrepancies and disagreements.

On re-uniting with DJ U-Neek:

We couldn’t stay unified without bringing back U-Neek and other alumni. It was what the fans wanted to hear, all the original Bone Thugs and U-Neek back in place.

On the randomness that is “Ghetto Cowboy”

You have to credit that to Krayzie’s genius creativity. One day he started wondering about what it we were cowboys in the ghetto and we painted that scenario, along with Thug Queen and Powder P. There’s no limit to what you can come up with in rap. That’s what it is — stories, it’s life, it’s experience and when you can take stuff like that and twist it and put a concept and situations, and really, that’s what it’s about.