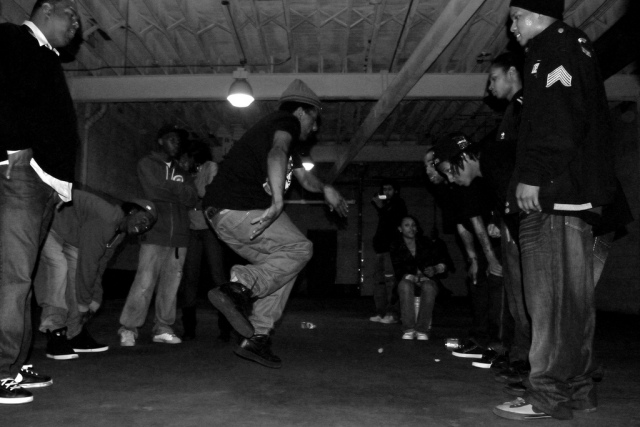 Sometimes a lack of context can be revealing. When I played DJ Nate tracks for an unsuspecting friend, his first reaction was to assume that this was the work of some avant-guard art-wank working out his issues with post-modernism through rap samples. I was in the process of telling him that this was actually the work of a 20-something kid from the west side of Chicago and that a community of teens actually dance to this stuff when I realized that in an alternate universe, he could be totally right. Incidentally my friend’s second reaction was to mumble “you could really fuck someone up with this stuff if they were on the wrong drugs.”

DJ Nate makes Footwork music, a variation on Juke, itself a form of Ghetto House, a raw hip-hop influenced form of House that’s been made by and for Chicago residents for years. I won’t profile the genre when others have already done it but what you need to know is that it’s fast (around 160BPM), made for local dance competitions and more often than not, weird as hell. It’s also the kind of thing that might have remained a local affair were it not for Planet Mu founder Mike Paradinas’ sudden interest in licensing the stuff after experiencing it via Youtube.

Shrewdly signing Nate along with fellow Chicago resident DJ Rashad, Planet Mu’s patronage suddenly made a style of music previously accessible only via myspace rips and local mixtapes into an international concern already influencing the post-Dubstep bass world. While there’s a longstanding tradition of British audiences adopting Afro-American dance music (Northern Soul, House, Techno) and then mutating it to their own needs (funk inspired post-punk, Rave, Garage) Chicago Footwork stands out by being stranger than any British variations on it so far. Ramadanman’s “Work Them” and Adison Groove’s Footcrab feature steady tempos and extended intros for mixing purposes.

Nate’s “See into My Eyes” seemingly shifts from slow to fast, features distorted bass ,and samples the singer from Evanescence of all people. DJ Rashad’s “It’s not Right” features a steadier tempo but obliterates a soul sample into a fragmented matrix that would have the most dedicated glitch producer scratching his head and figuring out what to do with this. The genre as we’ve been presented it so far is a sonic assault and I truly wonder how I’d survive several hours of this stuff blasted at high volume through overheated speakers.

Thankfully, it’s also a hell of a lot of fun, standing apart from the classier, artier and more sullen sounds coming out of LA and England. I’d be lying if I said that I knew where this stuff is supposed to lead to but for now, I’m pretty content to sit back, enjoy the ride and bounce manically to it like a Chihuahua on crystal.–Sach O