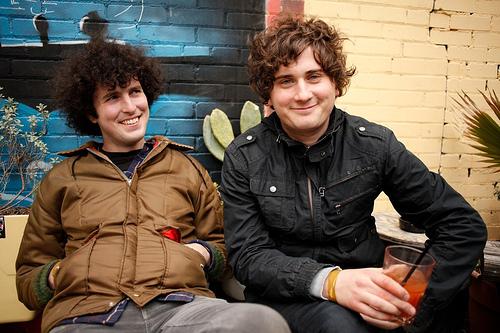 Douglas Martin is giving you glue for Hannukah.

As far as indie two-pieces go, Sisters fall somewhere between the game-changing ambient/noise/punk hybrid of No Age and the somewhat-bland meat-and-potatoes rock of Japandroids. Carrying far more melody than the latter but far less experimental fearlessness than the former, the Brooklyn duo fills every bit of empty space with distorted guitars and drums sounding like they’re only on the other side of the room. Being as though drummer/keyboardist Matt Conboy has a great deal to do with Williamsburg’s DIY venue Death by Audio being the go-to space for every ironic mustache and ill-fitting thrift-store jacket with a guitar in New York to be able to book a show, you’d be well within your right to hate Sisters on general principle, but you’d be missing the point.

Providing a satisfying longplayer of loud, shambolic, catchy rock titled Ghost Fits, Sisters’ debut is sadly not an album-long imagined sequel to the 1990 Patrick Swayze movie, where Tony Goldwyn’s character comes back from the dead and tries to exact revenge on Whoopi Goldberg and Demi Moore. Chalk that one up to missed opportunity.

“Glue,” the most pure pop tune on the album, starts with the buzz of harmonica and a bright, lightly picked guitar line before crashing into a burst of contagious sugar-rush that evokes the feeling of a room full of kids jumping up and down at an all-ages show — good vibes all around. “Lift your arms/Lift them up above your head/To the stars,” sings frontman Aaron Pfannebecker, charming vocal inflections and all. His enthusiastic vocals drives the freeness of losing yourself in the music all the way to the back of the room, where they’re sure to be serving vegan crock-pot cuisine. An experience that feels much shorter than four minutes, “Glue” is an explosion of catharsis that comes with rocking out, effectively beating Japandroids at their own game. Well, at least they have a cool name.