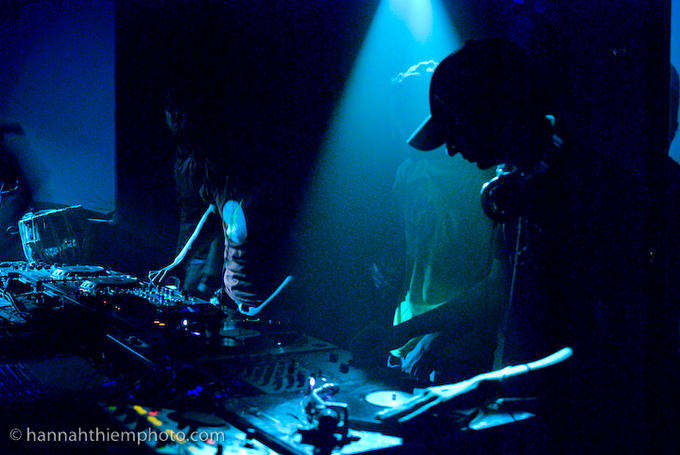 When the ever-discerning Sach caught Sub Swara in February, they earned his staunchest praise. In Son Raw’s words: “think banging mid-tempo beats with an array of eastern influences. Melding Indian instrumentation to the block rocking beats of the RUN DMC era, the crew was a refreshing change of pace, coming off like a funhouse New York version of California wonky with boom-bap rigidity taking the place of post-Dilla drum patterns.” Since then, they dropped the impressive Triggers, which cemented the crew’s rep as vanguards of American bass music (East Coast edition).

In honor of their Triggers tour (with a Low End Theory stop tomorrow night), the Brooklyn bombers have delivered the third volume of the Passion of Weiss Mix Series.  It’s replete with remixes, exclusives, and enough Dead Prez to send the Tea Party scurrying back to the docks. The mix is below, with a Q&A and tracklist below the jump, illuminating the meaning of their name, how they arrived at their singular sound, and the precise meaning of “brostep.”

Where does the name Sub Swara come. Hypothetically if one was going to order a Sub Swara sandwich, what ingredients would it have and would it be better than the Larry David sandwich?

Dhruva – Bit of double entendre in there. Sub refers to sub bass and also to the Sanskrit word “Sub’, which means “all”. Swara is the tonal center of Indian melody. SO put it together and you get “Bass Tone” or “All Tone” – It captures the big bassy sound that traverses many different areas and can (ideally) connect with everyone.

As for the sandwich- It’s gotta have spice and girth – I’d have to go with a lamb burger with mint-cilantro chutney, goat cheese and greens. It’s all juicy going down but beware cuz it might bust yer gut. I feel lame cuz I just had to Urban Dictionary the “Larry David Sandwich” (I’ve never seen Curb Your Enthusiasm). Never tasted sable before but I’m willing to venture that the LD, as good as it tastes, might cause rabies.

From my provincial perspective, the dubstep scene in New York seems to get less attention lavished on it than the ones in LA and London. What is it like over there and can a mustache handle all the wobble.

Dave – NYC is definitely its own beast when it comes to electronic music in general. We have really, really serious roots with punk rock, house, hip hop, and reggae, and I think a lot of that organic, no-bullshit, soulful element always comes out in music from NYC– while so much electronic music exists with a sort of emotional separation, that’s not really in our DNA. For what’s traditionally conceived of as “dubstep,” the UK remains the center, while the whole Brainfeeder world has some really interesting takes on the sound coming from LA. However, between us and our bredren Dub War and Trouble & Bass, dubstep has been part of the underground lexicon in NYC since 2005.

I seem to read a lot of talk about “bro-step.” Have you guys experienced this at any of your shows and if not, is there a cure?

Dave – There was a point in 2007, when every new producer was trying to sound like Coki’s tune “Spongebob,” where I think every DJ I knew was convinced they’d coined the perjorative “brostep.” I remember only thinking the term to myself, and then hearing Alex Incyde and Moldy use it 2 separate conversations that week… entertaining. At this point, when people think of “dubstep,” they more often-than-not conjure up a sonic image of hyper-aggresive, super-quantized 140bpm dance music with wobbles and screeches everywhere. That pallete can definitely work as something to get people excited, but a whole set of it just gets extremely boring. In the States, it’s the standard soundtrack for up-and-coming DJ’s, and in our experience, it really doesn’t play well to a room that’s filling up; it’s got all the sensual, dancing pleasure of being smacked in the face by a pickaxe. It also tends to be a game of heavy for heaviness’ sake, with tunes lacking the tense balance of groove and paranoia that makes the heavy tracks from the likes of Vex’d, Coki, and Starkey work so amazingly well.

Shirtless dudes who yell “WOOOOOOOOOOOO!” alot also seem to love “the bro” too, which you can view as a positive or negative.

We’re the cure! Seriously though, quite often after being on the receiving end of the brostep battering ram, we come in, drop the tempo a bit, and get the whole room moving together. We definitely have a grip of heavy tunes in the arsenal, which we like to dish out at the right times and really make the room pop off.

You guys collaborated with Dead Prez on the new record. What was that experience like and do they hate me?

Dhruva – That’s funny you say that cuz before M-1 even said “hello” on the phone, he was like “Fuck that dude, Weiss”. No, but really, they were great. Very down to earth, willing to do multiple iterations/variations, etc. The funny thing about making music today is that you might not even be in the same place making it and that’s how it went down with DP. I talked with M-1 and Stic Man on the phone about the track sketch I had sent them. They said they were feeling what were doing and looking to work with more wide-ranging sounds so there it started. They sent us a chorus sketch that Stic Man had written and recorded into his laptop mic in a hotel down south somewhere. We dug it so they built out verses and recorded them in studios – M-1 recorded his verses from a studio in Italy while they were on tour and Stic recorded from Atlanta.

Your press kit refers to you as a “global bass duo,” and within the sound you can hear elements of juke, funky, afro-beat, and dubstep. Obviously, none of those sounds are native to New York, but you’ve incorporated them well. You can see this sort of thing at work in a lot of contemporary groups — Gang Gang Dance, Rainbow Arabia, and Yeasayer to name a few. Do you find it challenging to incorporate new sounds that are foreign to your environment, or has the Internet made regionalism less of a concern.

Dave – Provided you do it with style, everything’s native to NYC. Also, as musicians and people, we’re all about deconstructing elements from their environments; the world is simply too flat for context to matter more than content. It’s not so much a challenge to incorporate things– anyone with a sequencer can throw together percussion loops from different parts of the world. It’s more a matter of creating elements that work together to make a song that’s better with them, than without them. Respect the song more than the parts, and it’ll work.

I assume you guys are rap heads judging from the tracklist. Have you guys always been big fans — who are your favorite rappers right now?

Dave – Growing up in the YO! MTV Raps era, hip-hop was a huge part of our formative years, and continues to be. Dave thinks Nicki Minaj is the best thing since sliced bread. Been a fan since I was a kid, starting West with N.W.A, Ice Cube, and then moving over east Wu Tang, Mobb Deep, Busta, etc. Right now I’m really into what Big Boi’s doing.

You guys remixed “Shutterbug.” Did you ever find out if Big Boi heard it. What’s your favorite Outkast record and why?

Dhruva – We’re not sure if Big Boi ever heard it. Hopefully he did. That original is such an anthem and has so much originality in it that were surprised there weren’t a whole lot more remixes of it out there (especially since the acappella is widely available). That’s why we chose to do it. I’ve seen a few more remixes out there recently and it’s interesting what a different take each one has on the original.

Favorite Outkast Record – Stankonia – the scope is just massive. The range and variety of production, vocal delivery, live elements all over it, while having the unmistakable Outkast identity is pretty jaw-dropping. It never gets old.

How do you think Triggers stands apart from the rest of your catalogue. What are you most proud of with the record?

Dave – I love Triggers. To me, it’s a snapshot of the two of us really working our collaborative dialogue, and being 100% uncomprimising on quality. The whole record stands up as a danceable, soulful set of tunes, and I’m extremely proud of the work that we did on “Steam,” and with Bogie & Biondo on “Bird of Paradise.”

Dhruva – I think we explored a lot more terrain on this album without losing a sense of what we love as musicians (an original sonic pallet, not being tethered to any one style). So there might be less obvious “global” influences in this album than our first, but the instrumentation is all over it – it is just used in different ways that don’t as obviously jump out as “global” or whatever else you would call it. Steam has 60 layers of indigenous south indian percussion that I recorded live in the studio in Chennai; There’s djembe, brazillian percussion, bansuri, middle easter frame drums, cumbia influences all wrapped up in what we like o think of as a cohesive progression of our sound. I’m really proud of “In Ether” (very personal for me), “Steam,” “Bird of Paradise” and “Future Fresh.”

What were your favorite records that you heard this year?
Dave – As far as EDM goes, I think the recent records from Lorn, Eskmo, and MuxMool are fantastic. Singles-wise, it’s hard to beat James Blake’s “Limit to your Love.” I also can’t stop listening to the Gaslight Anthem’s “American Slang;” go Jersey!
Dhruva – Big Boi’s album is amazing and I love the Dead Weather’s new album too (I pretty much will listen to any music Jack White makes on repeat for a ridiculous period of time).