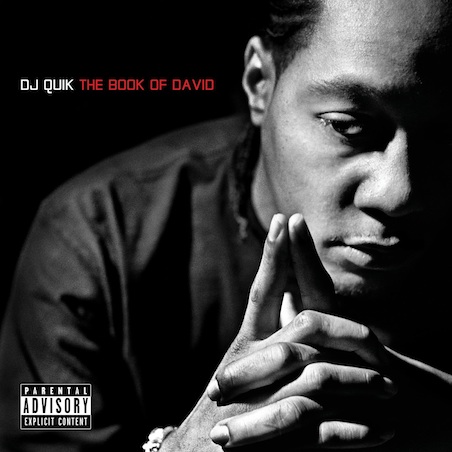 It occurred to me about halfway into The Book of David the other day that, De La Soul excepted, there isn’t another name in hip hop that has enjoyed a longer sustained loyalty for me than DJ Quik. I can still remember that autumn afternoon in seventh grade when my friend Erick handed me a Quik Is the Name (1991) cassette on the school bus, widening his eyes as he said, “Check this shit out.” Around seven minutes into the record, somewhere around Stan Jones’ guitar solo on “Tonite,” I was hooked. Since then, a span of two decades – nearly two-thirds of my time on this planet – has found me picking up just about anything with dude’s name on it: middling full-lengths from West Coast B-listers Suga Free and Hi-C, movie soundtracks for films I’ve never seen, an unabashedly contract-fulfilling Profile Records greatest hits comp. I even have cassette singles from 2nd II None and Penthouse Players Clique tucked away in a box somewhere in the closet.

I’m not gonna lie: it hasn’t always been fine wine and roses. Somewhere around the turn of the millennium Quik’s Quality Control department began taking too many sick days, and it showed. While I still enjoy the spotty Balance & Options (2000) more than I’m comfortable admitting, by the end of Under the Influence (2002) I was snoozing in an unintended parody of the album cover. Trauma (2005) dropped during one of the more destitute periods in my life and I vaguely recall a rather unpleasant incident involving my forehead, a wall, and the name of David Blake shortly after emptying my wallet on the release. A stint in prison for assaulting his sister and Quik’s outlook was even more grim, followed by a never-released collaboration with longtime affiliate AMG (The Fixxers) that brought nothing but bad blood between the two and an ill-advised lot of sterile, minimalistic club nonsense. Then something unexpected happened: a joint endeavor with Kurupt, the all-too-brief BlaQKout (2009), had all the characteristics of a stall tactic disguised as a casual side project, yet managed to be one of the best records of the year and Quik’s most inspired work since 1998’s Rhythm-al-ism. It thrills me to say that The Book of David is even better.

Whether or not Quik has entered the autumn of his career remains to be seen, but anyone familiar with his catalogue will likely detect the subtle breakthrough here in his production, a feeling that the auteur has finally ‘landed’ after years of incorporating various styles into his sound. Quik has embodied the “producer’s producer” axiom as well as anyone but his work on The Book of David is truly breathtaking, a blissful synthesis of live guitar and bass, softsynths and granular plug-ins, and ‘80s drum modules providing everything from 8-bit hand claps to siren-like whooshes that arc across the stereo field. The digital nightscape of “Babylon” and “So Compton”’s loping, circular thump would be apexes in any other producer’s entire trajectory; here they’re highlights among highlights. The well of inspiration seems to be 1980s R&B: the Patrice Rushen-esque “Killer Dope,” with blocky piano chords and a synthetic trumpet line; the silky groove of “Real Women,” which would comfortably nestle into an Isley Brothers platter with ease; and “Luv of My Life,” which sounds like an excerpt from Earth, Wind & Fire’s long-forgotten Powerlight (1983). Other than a scant but reverent nod on “The End,” the greasy P-funk that served as a blueprint on Quik’s classic ‘90s records has all but completely vanished.

Quik will never win any Feats of Lyricism awards but he’s has always been able to hold his own as a writer, and little has changed in his nimble delivery. There’s a poison-tongued diss track aimed at his sister (“Ghetto Rendezvous”), some grown-man rap (“Killer Dope”), paeans to the female figure (“Boogie Till You Conk Out”), and the requisite Dwele-helmed bedroom jam (“Time Stands Still”). The guest spots range from the always-reliable Hub City homies KK and Suga Free to Bun B and an especially enthusiastic Bizzy Bone. It’s telling that The Book of David bears the Mad Science indie imprint on its sleeve. Released of the past commercial prods of Profile and Arista, Quik is now free to make whatever the hell kind of tracks his muse sees fit, announcing his philosophy in “Fire and Brimstone”’s opening bar: “I don’t give a fuck about you – you – her – him…”

Will The Book of David be the record that will finally propel DJ Quik into the league of Household Names? Please. You know just as well as I that this record will have Quik’s devoted cult following in a rabid state of praise while the rest of the public reacts as if they would to the latest Sadat X or Too $hort joint. Personally, it took about five full listens before I stopped shaking my head at how unbelievably good this record is. Were someone to boldly proclaim The Book of David as Quik’s finest hour to date, I’d hardly be inclined to argue . Twenty-year veterans don’t make albums like this very often. Were Quik to retire tomorrow I’d still sleep soundly, knowing that the finale couldn’t have been more magnificent.