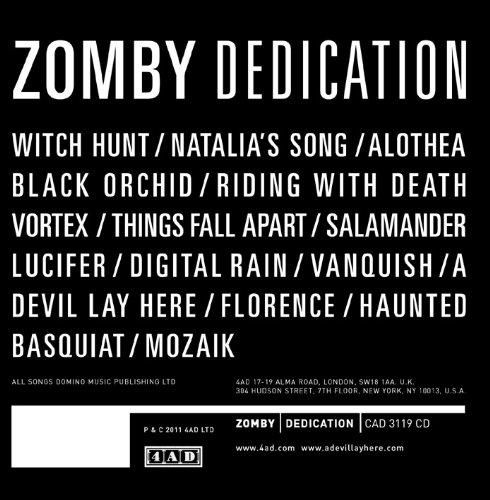 Despite the Walking Dead, Aaron Frank continues to endorse Zombies.

Calling Zomby’s new album his best seems slightly inaccurate. By now, it’s clear that every release is more warped and innovative than its predecessor. Oddly enough, it doesn’t feel as if Zomby is “progressing,”  as much as uncovering another place within himself. In years past, this seemed like a pretty non-traditional artistic trajectory, but the widespread impact of the internet on the music industry has made Zomby an important part of the first new wave of musicians who appear to be retaining nearly 100% control over their creative and business decisions from the outset.

Working from home at his own pace and sorting through what I could only imagine to be a flurry of label offers in his personal email inbox, Zomby, along with other new producers like Burial and SBTRKT, has managed to keep all of his projects uniquely original and free from any corporate influences. From the buzz-generating Where Were U in 92?, his 2008 tribute to 90s rave culture, to his new album Dedication, an intensely personal and intimate debut on the 4AD imprint, all of his releases possess a distinct, often immersive sound, one that would likely have a difficult time finding a home on a bigger label than a 4AD.

That’s not to say Zomby’s music is inaccessible. I’ve seen his tracks light up dance floors in mainstream rooms in LA  — at least as much as Diplo’s or Skream’s. Plus, he plays regularly on BBC Radio programs. His music conveys a disorienting wonderment, which doesn’t necessarily appeal immediately, but often lingers and crawls back into your psyche later — at times leaving you to question the significance of genre distinctions.

Take “Natalia’s Song”,  which shatters the boundaries of four different genres (R&B, Jungle, Dubstep and Garage) in four minutes, meshing them together in a subtle, beautifully arranged electronic suite, with more emotion behind it than most anything from the oft-limiting dubstep and garage. The subtlety of Zomby’s music is another oft-misunderstood trait. It may initially put off some listeners, but still remains cited as a talent by die-hard fans and critics. “Digital Rain” takes on a wildly experimental feel as far as composition is concerned, delaying the build and addition of a key synth melody until the last possible second. When the new synth part finally starts, the track takes on an entirely new feel, taking us from rain to thunderstorm bass, and otherworldly effect.

He’s also comfortable letting certain rhythms rest on their laurels — as exhibited on “Riding With Death” and the Panda Bear-assisted “Things Fall Apart.” Plus, he can ratchet up intensity by adding different elements throughout a track, as he does on “A Devil Lay Here.” These aren’t just admissions of nostalgia, but creative qualities that show tremendous restraint, especially when you consider the surge in ADD-driven dubstep and prog-house over the past several years. They’re also the hallmark of an artist unwilling to compromise his vision, another redeeming quality that finds a home on Dedication, which takes inspiration from the recent death of his father.

To call it a concept album would be inaccurate, considering that there really isn’t one specific idea or notion tying every track together.  However, there’s a new sense of wholesomeness and fulfillment that was hinted at on his last EP One Foot Ahead Of The Other, but never really grasped in full. Seeing as it took nearly three years to make, the variety of styles and influences on Dedication isn’t as surprising as the large chronological chunk they’re lifted from. Comedian Marc Maron’s joke about hipsters looking like they got dressed in a time machine, lifting articles of clothing from every decade since the ‘20s, could be applied to fit this record. The major difference is that within the 35-minute journey through Dedication, you feel like you’ve been paid in full on every new electronic trend and genre since the late 1980s, from someone who has experienced it first-hand– even if he didn’t.