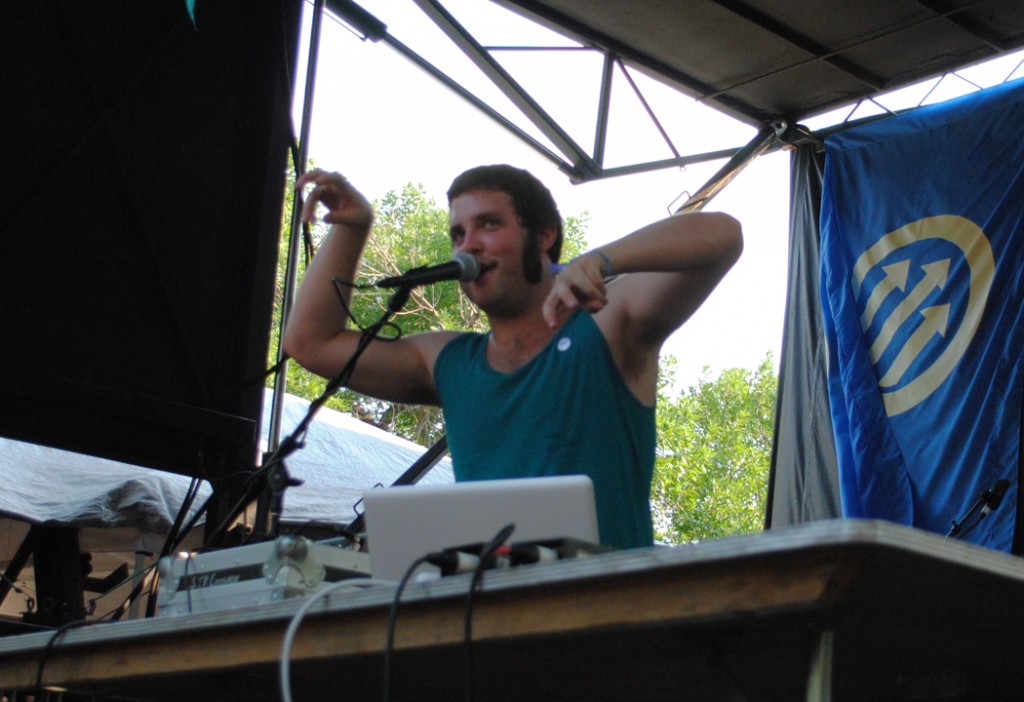 Up until recently, 22 year-old Will Wiesenfeld had spent most of his life in Chatsworth and Woodland Hills, suburban communities about 30 minutes outside of Los Angeles, where he recorded music under the monikers Geotic and [Post-Foetus]. Classically trained on the piano since age 4, he grew weary of the limits of classical music and began making electronic music at just 14, releasing several albums for free on the Internet in the ensuing years. That was until he felt a surge of inspiration from the artists involved in the beat renaissance at LA’s Low End Theory, and decided reincarnate himself once again as Baths, developing his own brand of beat music with a distinctive vocal aspect incites emotion.

Baths’ first full length Cerulean — released last year on Anticon  — explores an extremely wide array of emotions and textures, ranging from melancholy and isolation (“Palatial Disappointment”) to intense jubilation (“Hall.”) There’s also a playful and less-serious tone to songs like “Aminals”, two adjectives that best describe the producer’s casual demeanor in real life. Despite the triple digit heat index, he was one of the few people who dared to go shirtless at the Pitchfork Festival in Chicago, where I first met him a couple weeks ago for an early afternoon interview. Seemingly befuddled at the lack of other shirtless dudes at the festival, Baths summed up his personality best, boldly claiming “People are looking at me like I’m crazy walking around with no shirt on. So what? I’m gay! And I’m from California!”

But while the heat was a drag on some, it only seemed to fuel Baths’ intense performance the next day, which inspired the most dancing and crowd-surfing I saw all weekend. While fan-favorites like “Lovely Bloodflow” drew the most applause, there was also a surprisingly receptive and appreciative tone among the crowd during the new songs, vibrant, bass-heavy tracks with noticeably more complex arrangements than his previous material. After touring for nearly a year a half, Baths is scheduled to record his new album starting in August after a national tour as Geotic, a name he continues to release new material under for free on the Internet. In the interview, we discuss the beginning stages of the new album, his upcoming tour with childhood inspiration DNTEL, and the emotional subtext and meaning he attaches to his songs. —Aaron Frank 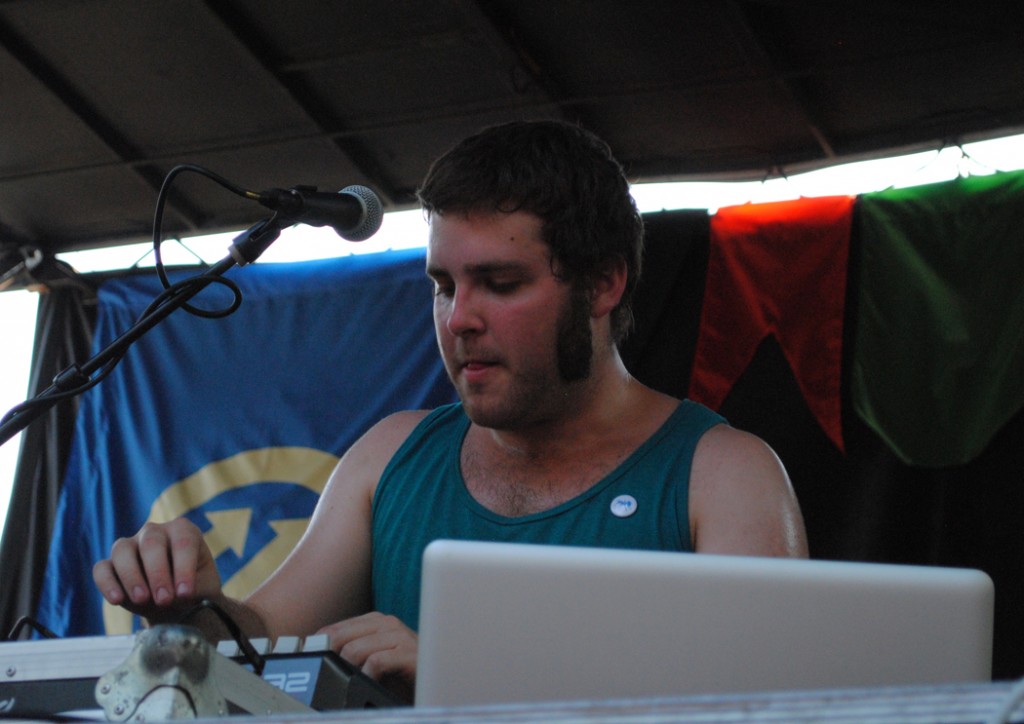 AF: So are you still based in Chatsworth? Does having more space outside of the city help your recording?

Baths: Well, there’s enough space in that house where it’s quiet and I can record myself forever during the day and not worry about yelling really loud or playing really loud. It’s in a decent enough neighborhood where nobody really cares, so it’s nice. There’s a lot of space, plenty of room to record and just do what I need to do.

AF: I noticed over the last few months you seem to be reviving the Geotic project pretty strongly. How long were you recording under that name before Baths started?

I’ve been recording music since I was 14 sort of along the strain of Baths. I was a different name, then [Post-Foetus] and now Baths, and it’s all the same sort of thing. Geotic kind of started midway through the [Post-Foetus] stuff. It was just a different outlet for me.

I always wanted to make that music, but it didn’t make sense to release it under the more prominent name as Baths or [Post-Foetus] at the time, because it would be sort of misleading. It’s about three years old though, and the Geotic stuff just comes out whenever it feels like the right time to make something like that. I think I have three or four full lengths under that name and about three or four EP’s, and then I have about that much as [Post-Foetus] that is unreleased that I made before.

AF: What is it sonically that makes you want to delineate between the projects?

Baths: I don’t even know really. Geotic tends to get recorded over winter break, when it’s beautiful and cold outside and the weather is just more mellow. The difference between when I feel inspired to record either of them is always up in the air though.

AF: Would you say your emotional state plays into that too?

Baths: Yes, in the coolest way of putting it. 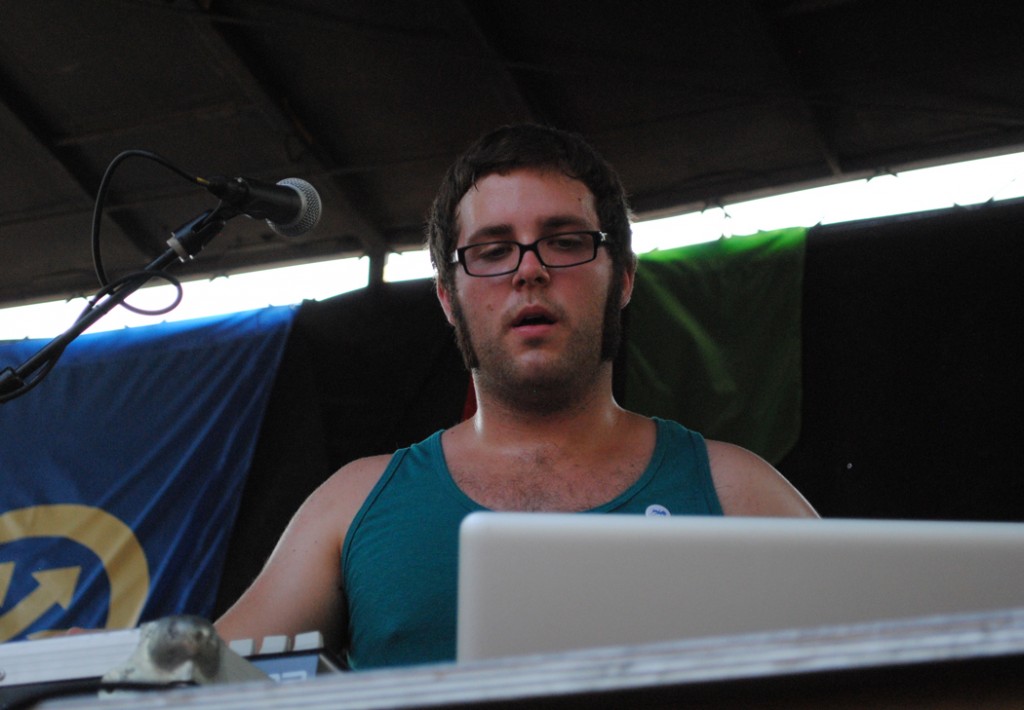 AF: So I just wanted to know about your specific musical inspiration for starting Baths.

Baths: Yes, definitely the scene in Los Angeles of Nosaj Thing and Flying Lotus and all those guys. Just the idea of having a singular live show that can affect that many people, I wanted the same sort of situation. So I went in to it trying to make an album that was very beat-oriented, and loud, but that was still poppy and my own thing. So that’s how that first album Cerulean came together, and now that the safety of that album exists out in the world, I’m really excited to record the next one and make that happen.

AF: So when you started Baths did you intend on having vocals at first, or was that something that just came along as you were recording?

Baths: Yes, I always wanted to sing. It was just a matter of time until I was comfortable doing it. There’s a little bit of vocals tied in to Geotic too. I try to make it prevalent everywhere in my music. It’s important to me. I like music with good vocals and lyrics.

AF: The best electronic music more often than not has vocals on it too. Do you think it’s important to have that human element to ground things?

Baths: Definitely. My prime examples of electronic music that I think is important is Bjork, I talk about Bjork all the time, and then early Morr Music, the first half of their catalog is all very emotional electronic music with lyrical content and vocal melodies with just a very wide palette of sound. There are all sorts of labels that have that aesthetic I really look for.

AF: How has touring impacted your songwriting or production process?

Baths: It hasn’t much at all, just that I’m more excited to record now than I have been in a long time. I haven’t had any time to record stuff so I’m just aching to do that, to sit down and take a song seriously. I’ve recorded stuff that’s more fleeting or in the moment, but nothing calculated and important the way I want to record music.

AF: When I saw you perform a few new songs at the Troubadour, they definitely seemed more beat-heavy, and maybe less reliant on the vocal aspect.

Baths: Yeah, it’s definitely more beat-heavy. All of those songs were mostly from Cerulean and written around that same time though, so it’s not like I’m going to stray from that with the next record. It’s just, that was the thought at the forefront at that time.

AF: When do you see yourself sitting down to record a new album?

Baths: This year, pretty much after August. I’m touring across the country in August with DNTEL and the One AM Radio, who are good friends of mine, and then I’m going to hopefully finish the album by December. That’s sort of the goal that I’ve set.

AF: What made you want to revisit the Geotic project?
Baths: Just circumstance. Things happened with Geotic that I wasn’t expecting, so I’m basically rising to meet these expectations.

AF: It seems like a pretty big Internet fanbase has sprung up around that project.

Baths: Exactly, but it’s also something that appeases me as well. It’s something I always enjoyed doing. There just wasn’t enough support to make it work for a tour. It’s much more relaxing, so the circumstance of doing a tour as an opening act I’m very comfortable with for Geotic. This tour is the perfect circumstance to take it around the country for the first time.
I’m really excited about this tour. It’s going to be all through August. DNTEL is one half of the Postal Service, and he’s never toured before. This is his first tour so there’s a big effort to make it something special. And the fact that I get to be on the bill with him for his first tour is like a very literal dream come true. Me and the One AM Radio are like super fans so it’s going to be a lot of fun.

AF: I think one of the main appeals of your music, at least to me, is that it feels so personal, which the lyrics are obviously a big part of. How important is it for you to incorporate type of weight in to your music?

Baths: For me it’s very important, but it depends on the song. There are songs with very lofty meanings in the lyrics, but the song “You’re My Excuse To Travel” is very silly. It’s all melodramatic and over-the-top sort of on purpose. It’s supposed to be sort of goofy, whereas a song like “Plea” I take a lot more seriously, since the lyrics are a lot more direct and intense.
So it depends on the song, and I think with the next album I’m making an effort to make it a lot more serious, not to where the music isn’t going to be fun but that I’m going to hold the lyrics in a very important place with this album, more so than Cerulean. More vocals, darker, and much more…I don’t know. It’s not recorded yet, but that’s the direction I’m heading in.