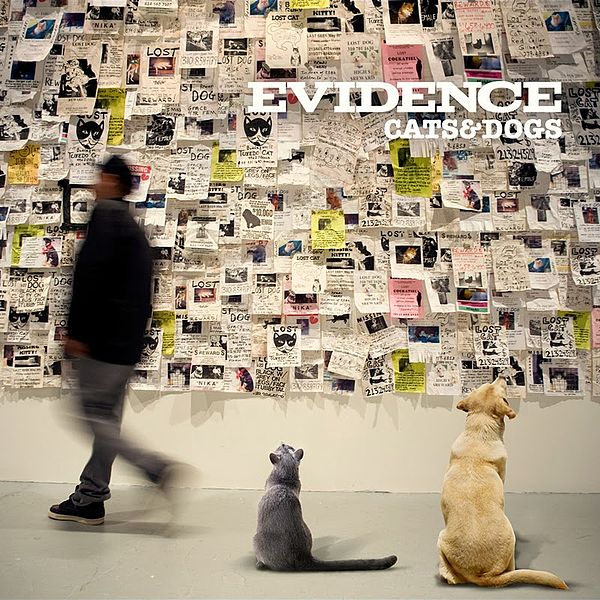 Evidence is the kind of rapper who provokes compliments that kind of sound like insults. He’s a steady, working-man, unspectacular, blue-collar, scrupulous rhymer, with a trademark flow that never gets boring.

That should sound better than it sounds because the consistency that Ev has shown over the last two decades has been remarkable. A verse from him usually won’t blow your hair back or have you calling your friend to discuss it. But almost every single verse will have you nodding your head, and admiring how someone can squeeze that much into a single bar, or a single sixteen, or a single verse, or a single song.

Cats and Dogs, Evidence’s second solo project and first release with Rhymesayers (whose track record on debut albums is getting better and better), is an LP made up of these songs, verses, and bars. And while it’s not the flashiest thing that’s dropped this year, (or even last Tuesday,) it’s a continuation of the trend: boilerplate beats bolstering the thoughts of an smart, imaginative, admirable MC on a relatable grind.

Notable songs? “Strangers” where we receive some advice on where not to leave our drugs, and a perfect portrait of modern paranoia. “The Red Carpet,” which showcases Alchemist in soul mode (no chipmunk) while Evidence trades verses with Raekwon and Ras Kass, the three different flows gelling perfectly as the chick on the chorus lets loose with a drawn out wail. “It Wasn’t Me” on which Ev lists the things he doesn’t chase, “fame, dragons, chicks, or dead presidents” and reshapes a Nas line to meet his own ends. “It Wasn’t Me” which uses Evidence’s name as the key ingredient in casual noir storytelling, imagining the horror of weed being illegal in California once again. “I Don’t Need Love” on which Evidence gets serious, recounting the events of his mother’s death, his flow speeding up a modicum to properly the frantic mood he’s conveying.

I wasn’t planning on doing this initially but the five songs I just mentioned as stand-outs are the first five full-length songs on the record. I guess that’s what consistency means. Every time there was a song I wanted to skip as not quite worthy of a mention, there was a beat that couldn’t be ignored, a clever line that got a laugh or a nod which I then felt guilty leaving out, a chorus that sounded different from how I thought it would.

And the record continues like that, without a weak song offered up. The collaborations are on point (how could they not be when they involve Roc Marciano, Prodigy, and Aesop Rock),the beats knock hard with the best contributions coming from Ev’s “step-brother” Alchemist, and the skits which hold the album together, all dealing with the expression that the album takes its name from. The cable news might be more attention-grabbing, but a good weatherman does his thing night in,night out, even if it’s raining cats and dogs.