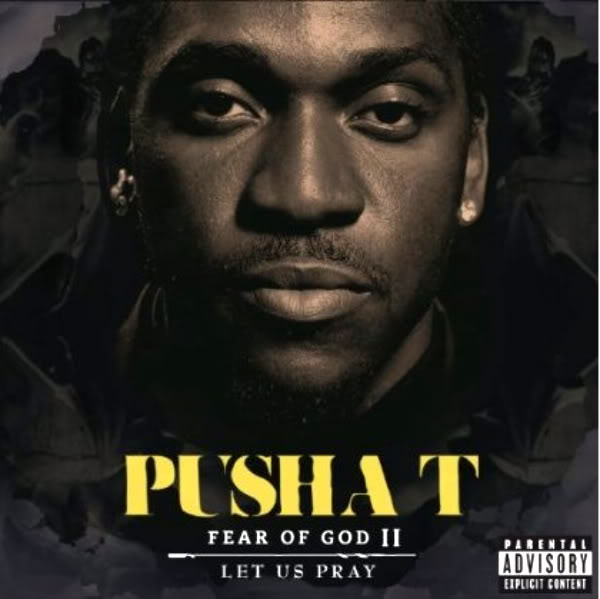 Rick Ross shows up on the penultimate song of Pusha T’s new album, Fear of God II. His presence underscores an important distinction between Pusha and the round mound of lavish sound. You see, we all know Rick Ross never really dealt drugs. Now Rozay has done an admirable job of rendering his lack of street cred void by crafting his hyperbolic fictive tales of noir grandeur into a respectable style. But hearing about all that opulence and how it comes from all the drugs that Ricky has dealt can be tedious, simply because it’s so safe. He can claim to have committed more crimes than Keyser Söze, but at the end of the day, there’s no real edge to be found there, no malice.

That’s not true of Pusha, which is ironic, since he’s without his brother on this effort. Even though Terrence Thornton has ostensibly left the life, there’s something in these songs which betrays an unsavory past. Maybe it’s just the sneering bite (biting sneer?) of his voice. Contempt is everywhere even when Pusha claims to be feeling pangs of conscience. The swagger in his voice undermines him when he raps on the intro track “Changing of the Guard,” “God in heaven knows what I feel inside/responsible for all this inner-city genocide” and when he claims that he’s “Tryna get saved” on the Kanye/Jeezy feature “Amen,” the pronouncement is quickly followed by a gleefully shouted, “Too late!”

But Pusha really sounds dangerous when he’s not even attempting to weigh the sins of his past. On solo cut, “So Obvious,” he claims, “in one short year, I’ve turned dreams to nightmares,” and then continues, masking boasts about his criminal past by making them apply equally well to his rap acumen. But it becomes clear how little it matters which game Pusha’s talking about in which particular bar at the start of the second verse, when he raps, “I’m so raw, runnin’ from the law, a nigga got rich from what you snort through a straw.” Pretty blunt.

Pusha also manages to hold his own amidst a who’s who of notable guests. (The exception being “Trouble On My Mind,” on which Tyler completely outraps him, adding to the recent evidence that Odd Future might have more to contribute than the trail of hand-wringing critics they leave in their wake.) He sounds completely at home on throwback gun-talk posse cut “Body Work” alongside Juicy J, Meek Mill and French Montana. It seems like a pretty random combination of rappers but it works perfectly. Ditto “Amen” on which Kanye and Pusha once again show counterintuitive chemistry and Young Jeezy shows up to make everyone more excited for his album to drop (December!?) than they already are.

It’s when Pusha starts to lapse towards the Ross end of the spectrum, trading grit for good living that his persona loses a little bit of its sheen. “What Dreams Are Made Of” is lifestyle porn at its most cliché, complete with a list of rich person perks, all of which we’ve heard about before. And while “Feeling Myself” has a couple of nice punchlines and a hilarious chorus, it’s ultimately an empty song. But the final track, “Alone in Vegas,” rejects the most basic idea behind Ross’s odes to wealth, which is that money makes life awesome. Even as Pusha remembers great nights in Vegas driving around in cars with “gold-winged doors” that lift when they open, he can’t help but recall friends that he’s lost, and his cocaine past informs the melancholy of his wealthy present. That car is devil red for a reason and wealth isn’t any fun if there’s no one to share it with.

These are the epiphanies that separate the real former drug dealer from the fake one. Ross does grandeur better than almost anyone else. But, inevitably, it’s impossible for him to blend that grandeur with equal parts of regret, conscience, and the true darkness of sinning to achieve one’s ends. Pusha poured that mix into Fear of God II and in doing so, shows himself to be nearly as potent as a solo artist as he was rapping with his brother.