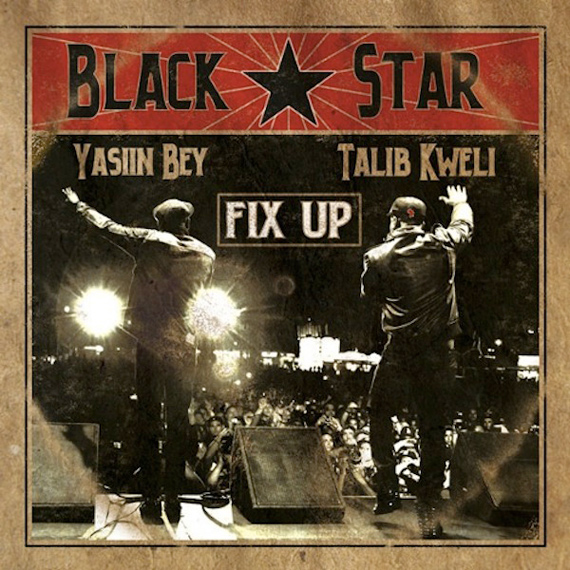 “Fix Up” is a combustion of warped soul; a sound that thoroughly confused the Colbert Report audience when it debuted on the show in October. That characterizes the awkward/awesome collision of worlds that happens on “Fix Up,” which has all the Stones Throw grit and fuzz, but also a catchy, dapper hook.

Mos Def – fine, Yasiin Bey – brings the usual power and mystique to his rap sage act. Talib (“taLEEB” according to Colbert) keeps pace, but leans a little too heavily on trite similes. Kweli’s squeak and Yasiin’s deep thrum don’t quite jibe when they trade bars on the third verse. They’re no Rae & Ghost.

In response to “Fix Up,” Blu released a song he had recorded over the same beat which, according to Okayplayer, appears on an unreleased Blu/Madlib project called ucla. Blu’s version is more what you’d expect from a Madlib collaboration: jaw-clenched, ephemeral-but-not braggadocio and less than two minutes long. But I like Black Star’s suited up approach. Both have their place, but “Fix Up” is ultimately more memorable.

The other new Black Star track is “You Already Knew” from a forthcoming Aretha Franklin tribute project by the duo. Oh No’s silky beat goes down smoother than “Fix Up.” Kweli shows his true colors and can’t resist smug, stupid comments about the Republican primaries, the Tea Party, and Occupy Wall Street. A YouTube search reveals equally stupid comments from Mos Def, but at least he keeps them on Real Time with Bill Maher or otherwise shrouded in vague oaths on his songs.

I would have no problem with a new Black Star album that was 50% Stones Throw like The Ecstatic. I also wouldn’t mind if Kweli left Yasiin alone and made a 9th Wonder album that we can all ignore.

Black Star “Fix Up” by 3DDistro