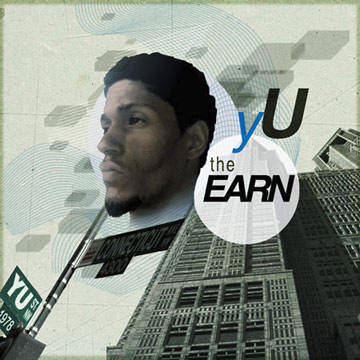 Jonah Bromwich gets more props in stunts than Bruce Willis.

DC Rapper yU’s new album The Earn is not about yU. It’s about Michael Willingham Jr. The braggadocious battle rapper that was has been replaced by a fully-realized portrait of a man. yU makes reference to his government name liberally on this album and there’s a reason: The Earn is an incredibly personal album, one where yU uses each song to mount an investigation of self.

yU’s been working on this album for a long time. He mentioned it on the intro to his debut Before Taxes. Yet it has a focus that belies the length of time that was spent making it. It’s thematically rich, focusing on the responsibilities of manhood while reflecting on family and the way that the past informs the future. Thankfully, rather than making these issues explicit, yU weaves them together with subtlety, never didactic but explaining his situation with so much detail that it ultimately becomes impossible not to empathize with him, and more casually, to like the guy.

Even when he focuses explicitly on rapping, yU is incredibly open, displaying  self-knowledge that can be rare in hip-hop. We learn early on that Willingham’s father worked with his hands and a clear filial link emerges when yU describes the process of writing raps on “Write On:” “got soul, scripted in each scroll that I scribble in, chiselin’ what I meant, within a whiff of the paper’s line, I try to take my time with it.”

On “Money (the Ahh Yeah),” Willingham avoids preachiness while taking a frank look at his own and the world’s obsession with money. And even when he does give advice, as he does on “Believe,” he couches it in his own situation, explaining how he’s dealt with haters. It’s impossible to resent a line that’s as earnest as “criticism is a good thing, but a sense of self-worth is a trait that’s sure to make king, of a peasant who thought that he’s worth less than they.”

I’ve scrupulously avoided the word “mature” which many rap fans think of as a synonym for boring, but I suppose I should admit that The Earn is a grown-man album. Even if the record takes a couple listens to absorb, its hooks and beats do much to ward off boredom. “Even If” is soulful and uplifting as yU energizes the track with a veteran’s flow and the harmonies on the chorus temporarily relieve the seriousness of the subject matter. And “Delay” has an extraordinarily catchy hook while a vibrant snare punctuates yU’s double-time verses.

The best example of a track that matches deep thinking to listenable elements, might be “Time Machine.” It opens with reflections about his parents and how they met (his mom was “super fly”). yU notes that since his dad’s sister was best friends with his mom, it was inevitable that “they were gonna get close.” After a gorgeous chorus, he then moves to his childhood describing memories with a wealth of detail. Finally, in the third verse, he laments his parent’s divorce but also understands that if they hadn’t broke up, his destiny might have changed. And he ends the verse taking his father’s place, as his daughter sits beside him looking at old pictures. It’s a great, moving track, and a perfect example of what makes The Earn such a wonderful listen. It’s intelligent and well-crafted, but its brains are ultimately dwarfed by yU’s generous humanity.