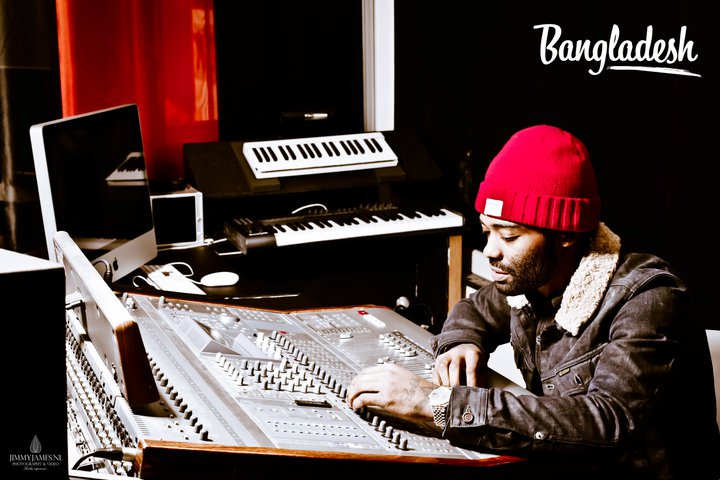 Grammy award-winning super producer Bangladesh earned his first big break when he produced several tracks (including the lascivious “What’s Your Fantasy) on Ludacris’ triple-platinum debut album, Back For The First Time. Bangladesh’s trademark bass-heavy compositions, which range from gritty, trunk-rattling thump—such as Lil Wayne’s “A Milli” and Gucci Mane’s “Lemonade”– to sprightly nightclub fare, like Kelis’ “Bossy”, have continued to permeate the airwaves. But rather than attempt to make his name as ubiquitous as Diddy or Dr. Dre, Bangladesh has rebuffed major labels to work independently and maintain full creative control over his projects. Passion of the Weiss caught up with Bangladesh to talk about his early career influences, his distain of record labels, and his upcoming album.

Passion of the Weiss: Lets take it back to when you first started producing. You grew up in Des Moines, Iowa, and then moved to Atlanta. When did you move down there, and at what point did you truly start to soak in the city’s music culture?

Bangladesh: I moved there in ’95 just to get to the opportunities. I was always mentally making music but (I started) physically making music in ’98. I bought an MPC 2000 and started making beats.

Passion of the Weiss: Who in the Atlanta rap scene was a significant influence on your craft?

Bangladesh: In the Atlanta rap scene? It wasn’t the Atlanta rap scene that motivated me; I was interested in music before I moved to Atlanta. It was like R. Kelly, Jodeci, Devante (Swing), Timbaland, Quincy Jones, Teddy Riley—it was those people who motivated me. And music runs in my family so it was just always in the blood anyway, you know? It wasn’t Atlanta that motivated me to do music; I just moved there because I had family there. My aunt was there, so I had somewhere to go. It was better than where I was. Going to Atlanta, no matter what you want to do, you have an opportunity to do it.

Passion of the Weiss: Many of the artists you’ve produced for are household names, but are you open to making beats for lesser-known independent artists who aren’t as likely to garner radio play?

Bangladesh: I do independent stuff all the time. You might have to be around to know all the ins-and-outs, you know what I’m saying? Work with an established artist all time, you know, that’s the whole point. My first break was Ludacris who was an established artist– I made “What’s Your Fantasy” which established him. So you know, you always gotta do that because you wanna break that next big artist.

As a producer, do you prefer to work side-by-side with an artist in the studio, or work by yourself and email your beats to them?

Bangladesh: It depends, man; it’s never just one way. It depends on the artist and how I would prefer to work with them, you know what I’m saying? If they need that direction, I would like to be there hands-on with them. If I don’t really know the direction that they’re going in, I like to be in there with them to see what they’re trying to do. If they’re established artists, man, sometimes they be so busy that I might just have a beat for them. They might contact me and ask me to send them something. If I have something for them I’ll send it to them.

Passion of the Weiss: You’re working on a new album right now. Can you describe that to me a little bit?

Bangladesh: Yeah. It’s a production-based album. To produce for these artists, you kind of have to follow certain guidelines of the direction that they’re going in. So you can’t always do the things that you want to with them that you feel is progressive or the new thing, because sometimes they’re scared of it or having their own little lane that they’re trying to accomplish.

This album is basically just taking the same artists that I work with and doing songs that they wouldn’t do for themselves– like shock value type records. A lot of features (will be on the album), from Rick Ross to Busta Rhymes to Kendrick Lamar. A lot of new artists like 2 Chainz and Ke$ha, Ice Cube, the Game. There’s going to be a lot of features on there. It’s going to be an album that is well produced from top to bottom, and every song could be a single.

Passion of the Weiss: Describe your mindset when you’re working in the studio. Do you have to be in the right mood to create a certain sound? Do you run into any difficulties creating the sound you want?

Bangladesh: I mean, I’m not on point all the time. Everybody has his or her days. Sometimes it comes easy, sometimes it don’t. Sometimes it comes quick, sometimes it takes a long time. It’s not hard to do what I do, but it’s sometimes not easy to come up with what they need. That’s the pressure that producers are under. If someone pays you to go in the studio with him or her, something original you gotta make something original right then. I don’t really feel pressured, though–at the end of the day, something’s gonna come out, so I ain’t really trippin’ about it.

Passion of the Weiss: Since your work started earning a great deal of buzz, you’ve received offers to join major rap labels such as Disturbing tha Peace and Bad Boy—yet you’ve passed on every single one. What do you like about releasing music independently and why is the idea of joining a major label so unappealing?

Bangladesh: You know, it’s just my choice of operation man. It’s just sometimes people understand you, sometimes they don’t. You know, you take somebody’s money, man, that’s kind of like you’re under his or her watch. I’m kind of against the grain; you know, make my own rules and create my own label, man, no matter how long it takes. It’s just the way I am.

Passion of the Weiss: You’re a Grammy-Award winning producer and are responsible for some of the biggest hits of the last decade. Do you still feel like you have something to prove? What’s the next goal on your checklist?

Bangladesh: No matter how high you get, you always wanna have something to prove because you wanna keep going. I don’t ever wanna be satisfied, you know what I’m saying, I’ll be bored. So I always got something to prove, man. The next goal on my checklist is to break my own artist.