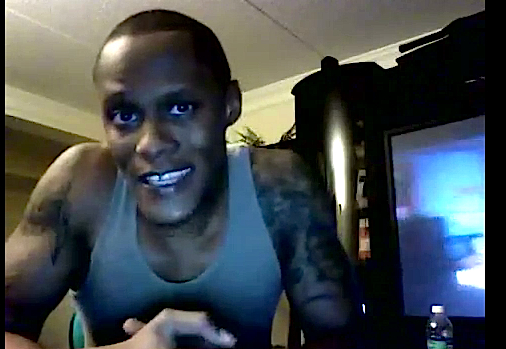 Slava P. runs the city and shows no pity.

What can you say about Canibus that hasn’t already been said in a million YouTube comments?

Since 1998, Germaine Williams has released dozens of “technical and lyrical” albums while concurrently pissing off a handful of his fellow artists, both relevant and irrelevant. The result is a strong fan-base — one that wars for him in the aforementioned YouTube comments, and one that he continually finds ways to disappoint. One day he distances himself from his musical career by enlisting in the military, the next he’s posting tracks where he “scientifically and mathematically” goes at the neck of the least-threatening rapper in the world, J.Cole –before apologizing less than 48 hours later.

On June 9th, Canibus took another tick in the ‘L’ column when he participated in a King Of The Dot rap battle in Los Angeles against KOTD-veteran, Dizaster. After lingering like a bad smell for two rounds, Canibus closed the show with a performance so bad, it made fat kids cry.

The good news is that there are lessons to be learned from Canibus’ ballistic self-cannibalism. Though he lost, Canibus demonstrated the proper way to accept defeat. See the following:

“I Tried My Best”

Sun Tzu said in the ‘Art Of War’, “if you are strong, appear weak; if you are weak, appear strong.” Apparently, Canibus took this literally, as he showed up to the battle with his arm in a sling and stacks on stacks on stacks… of Hilroy notebook pages. Knowing that the third round was dominated by Dizaster, Canibus begun by telling the crowd that although he had “trained for weeks” he hadn’t memorized all of his highly-technical rhymes. By announcing to the audience that he had given it his best shot, Canibus hoped to win some of them over by then….

It takes a big man to accept defeat, but it takes an even bigger man to place the defeat on his own shoulders before any official decision is made. After pulling out his homework and glancing uncertainly around the room, Canibus declared that Dizaster had won and half-said, half-asked if he could read from the “30 pages of rhymes” that he had prepared. Although I myself have never been in a rap battle, I understand that the main purpose is to a) humiliate your opponent and b) do it in a convincing manner. This is hard to do when you not only surrender, but turn to a study aid for the rest of your battle.

If All Else Fails, Flirt

When he finally does start to put words together, Germaine slips from talking about metaphysics, time travel and, ironically, how this battle is “about your intellectual power” into a something that resembles a scene out of Hitch. If one were to make a list of “Things You Should Not Say To Your Opponent During A Rap Battle,” one would place “you’re just a funny guy with peanut butter brown honey eyes” right at the top. It may even be the title.