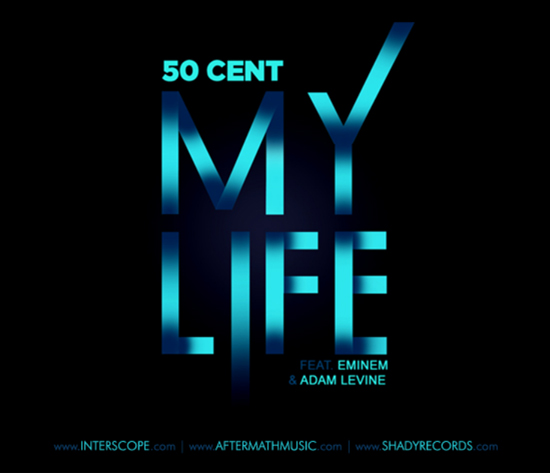 Well, if it isn’t the Hail Mary to end all Hail Marys. If you’d told me back in 2006 that I’d fuck with a rap single with Adam Levine on the hook, I’d have called your mom a whore and told you to suck a bag of phalluses. Or is that supposed to be “phalli?” I don’t know these things. See, I really hated that Kanye song “Heard Em Say” and I assume the general listening public wasn’t feeling that shit either. Def Jam dropped that shit as a single and they shot the video and everything and no one cared. I cared even less than most and I’ve been pretty pleased with rap hooks sans Adam Levine since. But that just changed. Like, today.

50 really went to the well on this one. The only thing missing is Dr. Dre on the beat, but he’s already gone that route a few times since things cooled down for him. In general, I’m not in favor of these transparently cynical ploys to get a single to pop, because deep down in my rap listening heart, I’m still a bit of purist. But 50 gets a pass. “Why” you ask? Well, I’ll give you a few reasons:

This is a good song. Period. I know that’s a subjective judgment, but as far as these cynical ploys for radio play go, it’s dope. Keep reading.

You can’t go wrong with Melvin Bliss’ “Synthetic Substitution” drum break. This is a fact. Every song that’s ever employed that drum break is tolerable at worst and usually pretty fucking good. “My Life” is closer to the latter end of that spectrum. S-1 did a good job here. I thought he was done after Kanye’s “Power.” Glad I’m wrong. I still think a choir would have set this shit off even better. But fuck my opinion.

Again, Adam Levine does a good job on the hook. Actually, I’m not sure I really said anything nice about him in the first paragraph. Point is: there’s no over-singing or melisma and I appreciate that. 50 probably wrote that shit too. In any case, we all know he’s only here to sound good and look good to the bitches so that 50 Cent can sound and look good to the bitches again by proxy.

Eminem slaughters his verse. Per usual. I mean, he drops the a corny bollock or two, but he just can’t help himself these days. If you don’t believe me, go listen to his verse on Rihanna’s album. Some of his humor is beginning to approach “boss at work/awkward forced laugh from employee” levels of dross. Nonetheless, the trademark technique and impassioned delivery are on display and more than make up for said dropped bollock. Pause on bollock.

Best of all is the fact that 50 absolutely knocks his verses out of the part. Now I’ve already noted that he’s flinging one massive Hail Mary. I mean, when’s the last time a rapper reached out to not ONE, but TWO white niggas for help on a track? I imagine more rappers would do that shit, but between all the poor financial decisions and bitterness at white music execs, it’s close to impossible for rap niggas to afford this shit.

Setting all that shit aside, 50 really goes in. The flow is on point for one, but what you really oughta do is listen to what the man is saying. He actually drops the Super Nigga act for a bit and drops what might be his deepest and most sincere sentiments since about 2006, when he copped to being confused at his mom kissing another girl. Listen to him admit to his hurt feelings and this being his “Recovery, my comeback, kid…” Because he’s still the villain, most of the bars are devoted to that classic “I’mma kill you like this – hahahaha” and “I’m better than you” and “I’ll be on top again” shit talking, but hey, this is 50. *shrug* He’s trying here. And, in my opinion, succeeding.

50 might have been better off naming this shit “Confusion.” Between Levine’s crooning about confusion on the hook and 50 admitting to confusion over how he got to his current weird state of rap purgatory, I’d suggest Mr. Jackson consider seeing a shrink. I mean, shit could have something to do with our collective ADHD, rap’s fickle nature, people getting tired of 50’s bully/beef act, him winning everything all the time, bragging about it and him losing that dumbass sales/publicity stunt to Kanye, which inadvertently led to the latter ushering in Tight Pants Emo Rap (pause for breath), but what do I know?

50 has tried EVERYTHING to get back on the charts as a solo act (strangely enough, he still manages to hit the charts as a guest act), so it’s easy for me to forgive him for making this move. He’s basically George Bushing the button on this one and interestingly enough, his random admissions of confusion (read: insecurity) have led to him making a big-budget version of Emo Rap. Kinda like Michael Bay making an indie Art-House flick and passing it off as his latest blockbuster.

I’m actually pleased that 50 has gone this route. As with T.I., lost in all the non-music related drama is the fact that 50’s actually talented. There’s something about the fall/winter that’s leading our old reliables to find the magic touch again. T.I. seems to have one with “Ball,” Jeezy’s “Get Right” would have made more noise sans Gucci misbehaving and now this. I approve greatly.

On the off chance that this shit doesn’t nab 50 a spot in the Top 10/a ton of radio-play, he can always recede back into the New York underground and make grimy ass shit until he realizes that he’s too rich to keep trying so hard to please us. I know Tony Yayo has numbers for cats like Alchemist, Doe Pesci and Harry Fraud, AND, I bet all those NY new jacks would jump at the opportunity to work with Fif. So yeah, maybe I want this shit to fail after all. Sorry Mr. Iovine…