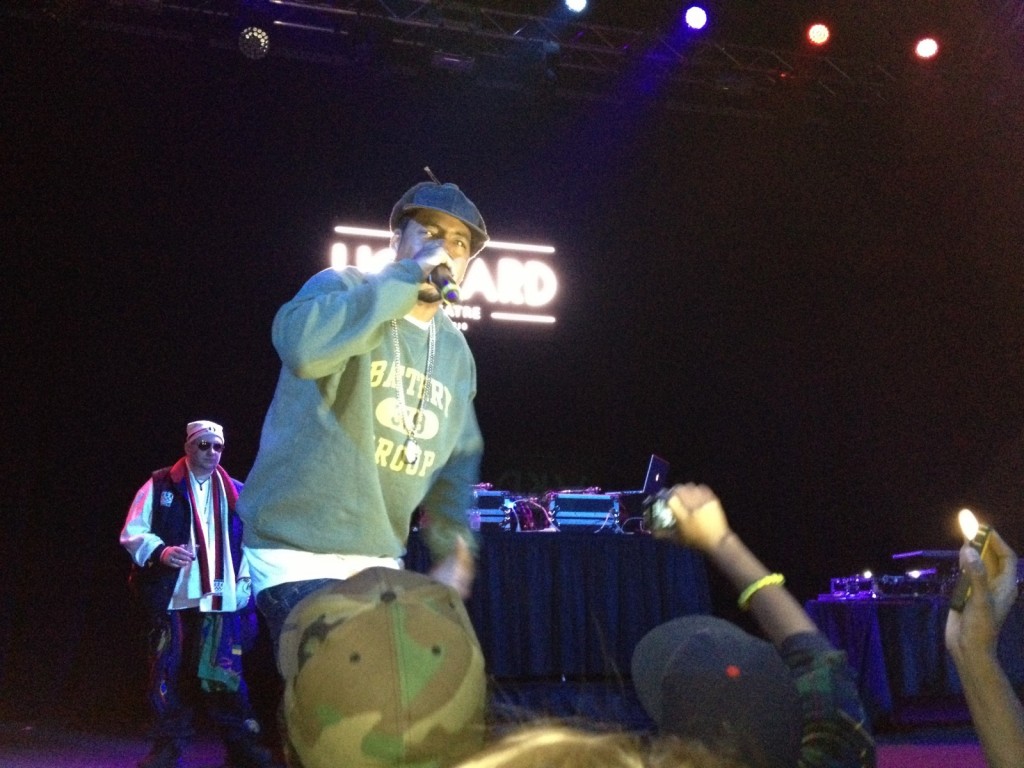 During his dead-end tenure as a loyal Flipmode lieutenant, Roc Marciano sounded like most underground New York rappers did at the turn of the 20th century. His writing was dense, aggressive, and spoken to power in a predictably snarling tone. Over the years, Marciano’s approach has grown more reposed and cunning, reaching a crescendo with the villainous noir persona adapted on 2012’s Reloaded LP.

But for all the wit and charisma acquired in the latter chapters of his career, the mellow Hempsteadian has continued to orchestrate soundtracks for solitude. Threats of violence are now voiced with faint whispers, and despite being pegged as modern “boom-bap,” the music often contains neither. Which begs the question of how well does Roc Marciano translate from the intimate confines of our headphones to a live capacity?

Last Tuesday evening, the coldest Washington D.C. has experienced this winter, fans flooded Howard Theater with hopes that Marciano, among others, was capable of executing a polished stage show. The Lo-End Theory Tour, headlined by minor-league veteran Sean Price, is a clever amalgam of iconic works from the world of music (A Tribe Called Quest’s genre defining 1991 sophomore album) and fashion (Ralph Lauren’s 45-year-old multi-billion dollar clothing line), both of which have long been fetishized in hip-hop culture. The marriage is especially appropriate, considering that Marciano name checks Polo’s brand on the Q-Tip produced “Thread Count,” as well as nearly half a dozen times elsewhere throughout Reloaded.

After several mundane undercard performances, Marciano nonchalantly moseyed out from behind the stage curtains to greet the thinnest crowd hosted by the historic venue since its grand reopening nine months earlier. Marciano’s attire was notably tame compared to the gaudy scarfs, oversized denim and polar bear embroideries sported by his colorful cast of tourmates. With the hood of his charcoal tinted rain jacket hugging the same gumshoe chapeau worn in the Jason Goldwatch-directed visual for “76,” Roc favored a streetwise Sam Spade. One light tug at the bow dangling atop his head would have likely brought a heap of alarming contraband crashing down onto the patrons below.

Assisted by DJ PF Cuttin, he opened with “Scarface Nigga,” an album cut buried so deep that it wasn’t even featured on the original pressing of his full-length retail debut. But the audience, all 34 of them, rapped every word of the obscure record. After shedding his coat and bulky sunglasses, he responded to chants calling for “Wee Ill” by extending his hand in bromance. “I’m going to party with y’all tonight,” Roc assured. “Fuck I look like a jukebox nigga?”

Ironically, his performance would indeed prove to be somewhat mechanical, as that brief moment of banter was the first and last time (outside of asking permission to sip his bottled water) that he would engage in direct conversation with the ticket holders. That’s not to say Roc’s stage presence was disenchanting. There was a sense of urgency and intense focus on display throughout the hour-long set. Each lyric was enunciated with a precise attention to detail and no syllable was left behind.

Miraculously, Marciano managed to dodge all the hackneyed cliches one would expect to encounter at a concert catered to 80’s babies. Call-and-response dialogue, a capella freestyles and incessant requests for the DJ to “bring that shit back” were entirely absent from his act. At one point, Sean Price darted across the stage lugging a textile suitcase, presumably crammed with vintage articles of Polo, to express his adulation for “Hoard 90.” The abrupt cameo opened the floodgates for unabashed comradery. Thirstin Howl enlisted as a bartender for the entire front row, filling hoisted cups with massive shots of Hennessy. DJ J-Love, resembling a life-size Pope Benedict figurine staged in a streetwear storefront, found himself planted motionless under Roc’s wing, occasionally nodding his pale face to beats blaring from the sound system.

Marciano appeared oblivious to the mob developing onstage, which eventually outnumbered the audience itself. Clearly placing a steep premium on economy of words, he exited the theater after performing “Deeper,” arguably the most accessible song in his catalog, without rattling off a single shout-out or promoting any forthcoming business ventures. When it was all said and done, Roc Marciano’s stage show didn’t deviate far from his triumphs in the recording booth. He simply delivered a no frills exhibition of aging exuberance and seasoned craftsmanship for the handful of fans and peers capable of appreciating that sort of thing.