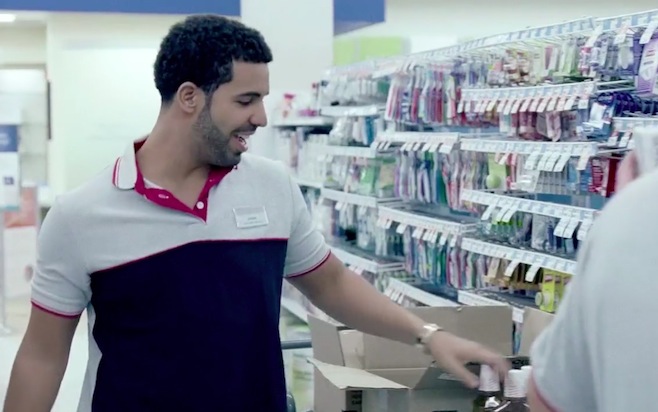 What do you do when you drop a just-okay single for your third album? Well, if you’re Aubrey Grahammy, you release some visuals that stretch your two minute song out to five-plus, all while profusely mentioning the city you grew up in (again) and creating a fictional back-story that people can relate to. But just because your skits are funny and there are no less than a dozen winks to Toronto doesn’t change the fact that your song still sounds like it was recorded by a hungover Big Sean or a perfectly sober French Montana.

After spending all of 2012 as the go-to guest feature guy with both rappity-rap bars and sing-along hooks about making your semen sweeter, you would think that Drake could muster up more than two minutes of gloating. Then again, this is probably another power move that Aubrey and 40 had planned out months ago in their manifesto (which is bejeweled) about lowering the public’s expectations so that their next project will appear to be on some next-level shit. It’s like what the pick-up artist community refers to as “negging”, except it’s being done on a national stage.

As a Canadian and a Toronto-transplant, I can appreciate all the subtleties of Director X’s unofficial HYFR follow-up: the Toronto Parks & Recreation plug, the profuse Shoppers Drug Mart (it’s like your CVS, but we don’t sell ammo) mentions, the “Oh My Bosh” exclamation. Even seeing Ms. Graham in her B-Girl stance outside of his Forest Hill mansi…er….project housing. All of these are cold and calculated attempts by Drake to convince us that he did, in fact, start from the bottom. Who cares if they’re not true! You listen to Rick Ross don’t you?
The second half of the video just kind of shows Drake doing stuff that you and I can’t afford with his friends. This is where we’re allowed to hate him again. Just look at that cock-sucker, bowling and go-carting with beautiful women! Grrr!

After watching this video the first time, I’m filled with emotions: jealousy, pride, ambition, lust, vengeance, hungry. By the third time, I find myself humming along to the hook. By the fifteenth, I’ve memorized the lyrics and have started working on a remix. So hats off to you, Drizzy and Director X, for creating a video that actually improved the quality of the song. Unfortunately, the song is still super shit when listened to without the accompanying visuals.