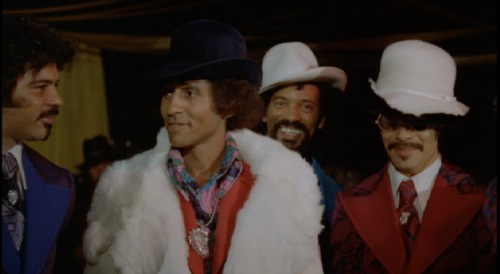 The Max Julien #1 Draft Pick was Camp Lo, who forged an entire career out of the fur coats and the 24 karat-flash of The Mack. Pimp C probably also picked up a few pointers from the wardrobe specialist better known as Goldie. And you know Curren$y made a killing out of kicking similarly simplistic pimp shit (but somehow deceptively complicated). A$AP Rocky was the latest to delve into the walk-in closet of the man behind The Mack. After all, his first single off LongLiveA$AP was called “Goldie.”

“Max Julien” offers similar nostaljack. Not only does it take it’s title from the actor behind the archetype, but it once again pairs Rocky and Ferg with A$AP Ty, the teen beast responsible for the songs that triggered Rocky’s initial rise. Even though it’s ostensibly a throwaway from a Funkmaster Flex tape, “Max Julien” is the closest thing to a sequel to “Peso” that we’ve heard. It’s a glazed opium donut of a beat, the sort of thing that people were calling cloud rap until Rocky came along and then they just started calling it “ASAP Rocky-core.” Maybe that’s just me. Or maybe I’m just exhausted from listening to submissions of kids who treat LiveLoveA$AP like The Blueprint.

Low-key, this is probably better than half the album and the sort of thing you have to do to keep your name hot in both the streets and with people who attend Jeremy Scott Coachella parties. This is the sort of thing Jay used to do. Drop one “Hey Papi” for every “Hard Knock Life.” For all the Alexander Wang interviews and make-up tips Rocky might offer, tracks like this remind you why he first made half a million off scarves (maybe?). This is glorious haze.

To double down, today marks the leak of another “U.O.E.N.O.” remix, with Rocky and Future Rockefeller. Childish Major ethers the existence of Childish Gambino off beat alone. Maybe Static Major is watching down on him from Lollipop Heaven. These guys deserve a $1,000 alligator shoes and a Grammy filled with lean for this one.