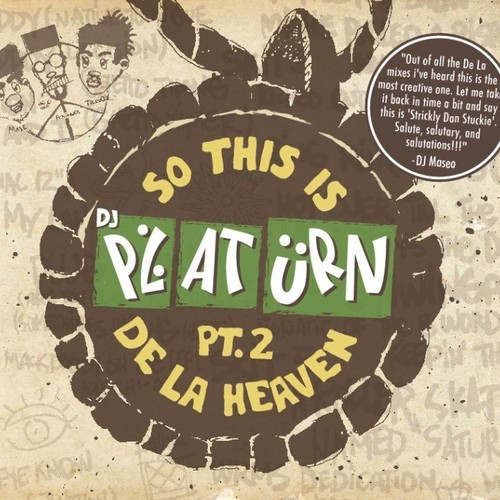 Whilst recently sitting poolside at the Passion of the Weiss Compound smoking cognac soaked blunts (you know how we do), one of my fellow writers mentioned he had an upcoming party and asked for recommendations on what would make for good music to be played for the evening. My answer was immediate. “I honestly start every party I throw with DJ Platurn’s ‘So This is De La Heaven, Part 1.'” Dropped in 2003, it’s the perfect match of crate digger’s obsession and De La jams. Essentially, Platurn intersperses original sample material alongside De La Soul tracks with a master’s ear for keeping the party going strong. On Part 1, Platurn does a yeoman’s job of selecting the songs that clearly are the most capable of raising the roof, from Maceo Parker through Funkadelic. This is a mixtape that starts strong and goes stronger as it progresses. If your ass isn’t shaking by the end of the hour-long party, well, your ass may well be broken.

Imagine my great surprise when I learned that Platurn just dropped the follow-up a decade after the fact. Now, you’d be more than justified to take my word on how good Platurn is on these mixes, as my opinions have never let you down before (probably because you never considered them prior to this, but let’s not equivocate here). Part 2 opens with DLS’ own Maseo plugging for the 20-year DJ vet and concludes with Michael Rappaport voicing his respect for the founder of the Oakland Faders crew.

As the Bay Area producer points out in Part 2’s liner notes, a lot has changed over the last ten years, not the least of which includes his growth as a spinner and the improvement of his own equipment. Naturally, this leads to one of the biggest differences between Parts 1 and 2: Whereas 1 has a much more DIY feel and sound (the vibe simply is more “raw” on the predecessor), Part 2 is as clean as a WRMS shout-out. Gone are the sloppier scratches, replaced with a much smoother ride.The second difference lies in the samples chosen the second time around. If Part 1, with its heavy funk groove, is the perfect way to get the party started, Part 2 could be the ideal conclusion to the evening. The jams selected are far more laid back, ranging from Stevie Wonder love songs to a Disney Adventures in Music selection.

Now, there are those who claim they’d prefer hell for their afterlife, as that’s where all the good musicians end up anyway. Seriously, who wants to sit around listening to harps for eternity? Platurn’s De La Heaven might just change the minds of quite a few sinners, myself included.