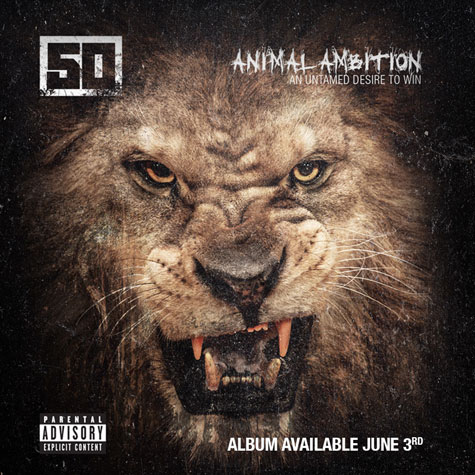 Doc Zeus ain’t supposed to do this shit, but he forgets

There is something ironically apropos that the best professional promotion that 50 Cent’s career has enjoyed in years is a gravely errant first pitch delivered at a Mets game. 50’s mockable, misfiring fast ball might have missed the catcher’s mitt but 50 found himself the topic of national discussion again, winding up as a clip on CNN and other news outlets, giving the Queens rapper the most mainstream attention he’s enjoyed in a nearly a decade. As an artist whose dogged devotion to the commercially struggling genre of gangster rap, a wild pitch that ended 50 feet away from home plate feels like an oddly appropriate metaphor for his career right now. 50’s influence on hip-hop has long since been eclipsed; six years of futily courting commercial success with a series of uninspiring singles, mixtapes and guest verses for his long-delayed fifth album, Animal Ambition, makes it highly unlikely that he will ever be a rap star, again. Why does relevancy seem to escape 50 Cent, though? Why does nobody seem to care about 50 Cent anymore?

Few stars have grown as bright as Curtis Jackson, nor have fizzled out as quickly. There have been rappers that have sold tens of millions of records like 50 Cent didm but few that carried the same level of cultural import that Jackson once had. Rappers such as Nelly, MC Hammer and Vanilla Ice were all artists that enjoyed debut records that could rival 50 Cent’s sheer commercial popularity but none of them could be accused of capturing the same cultural zeitgeist as 50 did.

The mega-million-selling success of his seminal debut album, Get Rich Or Die Tryin’, was quietly transformative for the major label hip-hop scene in the 2000s. The nine million records 50’s debut pushed in domestic sales gave birth to the formula that dominated commercial hip-hop for the next several years. You start with the aggressive street single (“Wanksta”) to court your core fan base, follow it up with a danceable, radio-friendly single (“In Da Club”) and move on to the sweetly saccharine thug-in-love song tailored towards your growing female devotees (*21 Questions”). Sprinkle in enough gun, pimp and money talk to complete the parental advisory sticker trifecta and you have a demographics triangulating template for multiplatinum records.

50 Cent built an multi-million dollar multimedia empire with GRODT’s honed commercial formula. His G-Unit Records imprint produced a series of clone albums that became successful in their own right in the following years. G-Unit artists Lloyd Banks, Tony Yayo, Young Buck and The Game became stars in large part because their debut albums closely aped the blueprint provided by 50 Cent with his debut. It certainly didn’t hurt that Get Rich Or Die Tryin’ was a certified modern masterpiece, either. Gangster rap was in and 50 Cent became the premium purveyor of raw street aggression as he sold over 30 million records worldwide from 2003 to 2009. So, what happened? Why did 50 Cent go from sitting on hip-hop’s Iron Throne to completely falling off the mainstream map? It begins with a certain, outspoken rapper from Chicago changing the entire game.

During the summer of 2007, 50 Cent and his erstwhile rival Kanye West engaged in an ersatz battle for rap supremacy as the pair famously scheduled dueling release dates for their respective third albums on September 11th of that year. When Kanye soundly defeated 50 in collective sales during that first week – 957,000 to 691,000 – it ultimately seemed to signal a seismic shift to the collective landscape of hip-hop. Not only for 50 Cent’s career but what was actually “relevant” to hip-hop fans, themselves. Kanye’s brand of ever-adapting, progressive and personal hip-hop became the progenitor of a family tree of emotionally sensitive rappers that sprung forth from his seed. Yeezy rapped about high fashion, art, romantic relationship woes, family struggles and his own middle class background that stood in deep contrast to tales of the gangster lifestyle popular in commercial rap at the time. The first rapper with a Benz and a backpack broke the dominant mode of the ultra-macho, alpha male rapper, best exemplified by 50 Cent himself, and his commercial and critical success paved the wave for the most popular rappers of today including Drake, Kid Cudi, Macklemore, Kendrick Lamar and many others.

The culture of rap music has never been more emotionally honest or willing to express their personal vulnerability than today. Meanwhile, 50 Cent has expressed total perplexity regarding today’s rappers, mocking them on social media for their fashion choices and perceived softness while he continues to plow through with the type of “aggressive content” that brought him to the dance. It is the reason that his latest offering, Animal Ambition, is an album that feels like an anachronism in today’s hip-hop climate.

Animal Ambition is not necessarily a bad album but it is an LP that feels like its directly conceived from discarded B-Sides and cutting floor leftovers from previous projects. 50 Cent is courting classic G-Unit nostalgia on the album while lacking a cohesive identity to make the album work enough on its own. Most of the album’s songs are competent enough rehashes of earlier work but lack the fire and personality that made 50 Cent shine a decade prior. It’s no wonder that Interscope balked for so many years on releasing a new album before eventually letting 50 go independent in February.

Lyrically, this album isn’t delivering anything particularly new or innovative. Animal Ambition finds 50 doubling down on the greasy talk in hopes of recapturing nostalgic fans of the G-Unit’s golden era with decidedly mixed results. Songs such as “The Funeral,” “Flip On You” and the Dr. Dre-produced “Smoke” will be pleasantly vintage to older fans, displaying 50’s trademark mastery of melody, but has a dated sound that is totally alien to modern radio. On “Chase The Paper,” you can hear 50 Cent admonishing other rappers for being “suckers for love.” Of course, this is an attack that not only ignores the fact that particular character “flaw” has made a lot of young artists extremely popular (I’m looking directly at you, Drake) but is a lyric that he literally used to describe fellow Queens rapper Nas on “Piggy Bank” in 2005. It is moments like these that make it abundantly clear why 50’s music is no longer relevant on a large scale.

During his heyday, 50 Cent’s best material had an anthemic quality that managed to overcome the fact that his lyrics often traded in rote gangster cliches without dealing with the moral complexity of Biggie, Nas or Ghostface. 50 Cent understood how to write a hit song better than any other artist of his generation but rarely did his material trade in anything that felt overtly personal to him. It’s ironic that an artist whose much-publicized, bullet-ridden life story was enough to be immortalized in a semi-autobiograpical film, there are very few truly personal narratives explored in his music. In a generation of rap music that is built almost exclusively on artist’s over-sharing their feelings, 50 is never going to be able to compete if he’s unwilling or unable to articulate a narrative beyond bland rhymes like “I woke up this morning, this is insane, Rich as a motherfucker, and ain’t much changed.”

In Zach Baron’s wonderful GQ profile, we find a more human and relatable Curtis Jackson than publicly divulged at any point his career. 50 seems more friendly, introspective, funny and poignant in that piece than on any song on Animal Ambition. An album of nostalgic gangster rap songs and a well-timed G-Unit reunion at Summer Jam isn’t likely to sell many units nor make great art. One wonders if he mined the great stories of his life, he could mount a real attempt at a comeback. If 50 Cent still wants to compete, it’s time to open up.