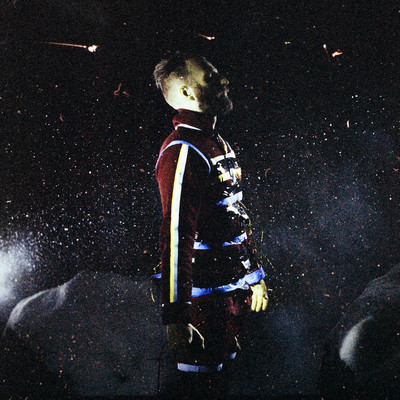 You know how, in Tron, the main character gets sucked into a computer mainframe? Ben Frost’s new album A U R O R A captures what it’s like to go through that experience—and, trust me, it ain’t as pretty as Disney makes it out to be. Melodic synths groan and shiver. Beats rumble like pummeled trash cans. Electroacoustic grooves wax and wane, starting off quiet only to build to apocalyptic volumes. Listening to this, I now have a much better sense of how it must feel to be enveloped in digital fog, broken up into a million microbits, sucked through a screen, and then reanimated in a deeply unfamiliar landscape with no way out.

If that description makes you wonder why A U R O R A is worth listening to, well, for some music consumers, there really is no choice. When I put on A U R O R A for the first time, I didn’t listen to it —- it took control of me. I was walking down the street on a sweltering hot day, my ears sweaty up against my giant headphones, and as soon as I made contact with the searing synths and syncopated heart-beat drums of the album’s second track, “Nolan,” it was as if my body was being dragged across the pavement by forces beyond my control. You know an album is good when it’s the one in charge.

Frost, an Australian composer and producer who lives in Iceland, has been putting out albums for over a decade, and if you had to place his experimental music somewhere, it’s probably most fitting alongside the stuff of electroacoustic innovators like Fennesz and Tim Hecker. While A U R O R A is intense and foreboding in nature, it doesn’t follow familiar paths to sonic annihilation. The tonality is subtle and textured, his synths suffused in screeching gain but also blissful haze. The rhythms are more cinematic than dancefloor-oriented, molding with the acid rain panorama. Of course, plenty of other musicians are making dark, heavy music nowadays. But their motivations are a lot more obvious, and much less interesting.

A U R O R A is different. There are no cheap thrills here, no dubstep bass or MPC bombast to lean on. There are no lofty pretensions, either. But there is a sense of raw, primal intensity going on within these nine tracks that gives the music an immediate and undeniable appeal. Take “Secant,” for example: A hellride of atonal metallics and death-stomp drums, its only sign of hope is a thread of melodious bells, which ring oh-so-quietly in the mix. But halfway through, the track winds up and then doubles-down with an absolutely fucking triumphant synth line and ricocheting drums. If you played this track loud enough—at a nightclub or EDM show, perhaps—I can imagine people responding by suddenly and unexpectedly bursting into tears.

I have to say, it’s fun to imagine what a gaggle of brostep knuckleheads would make of A U R O R A. Would they curl up into the fetal position and gaze deep into themselves? Or would they shake their heads, shut off their ears and head to the bar? Who knows? Who cares? This album is a fundamentally unusual experience, but it doesn’t seem like Frost is trying to intentionally alienate or provoke. Quite the opposite: the textures are visceral, but also incredibly warm. And there’s just enough melody going on to keep you transfixed.