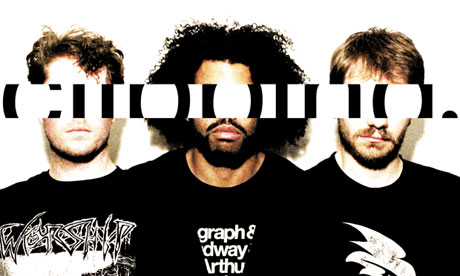 One of my favorite movie motifs is in the Coen Brothers’ Fargo when a car’s “door ajar” chime punctuates and portends several deaths throughout the film. You can read it as the indifference of the universe made manifest, a corrolary to the way that best laid plans take on a life of their own, or as a manifestation of some fundamental hauntedness that concerns the film’s whole world. In a movie about a kidnapping/ransom plot that gets away from it’s bumbling architect due to both left-field assaults of coincidence and the chaotic momentum of violent men loosed with a solid financial incentive, these all have latitude to make sense. Alternately, you can miss it totally or choose not to read it at all because it’s so organic to the movie’s diegesis that, even if it were stylized as a mockumentary, that “door ajar” chime would still likely be there, just not necessarily mixed to chill your ear.

This is the same genus of move Clipping opens with on their vowelessly-titled Sub Pop LP CLPPNG, which comes out today. Piercing, loosely modulated feedback that’s at once native to it’s environment and a low-key pace-setter. It’s not something being played so much as a machine powering up having it’s parameters adjusted. The group’s two producers (William Huston and Jonathan Snipes) have CVs encompassing (but not limited to) abstract harsh noise, film scores and music performed under the name of a fictional sea captain that’s so joyful that it merited coining the term “ravesploitation”.

Enter Daveed Diggs, the group’s primary mic blesser. He raps faster than most civilians can jaw air period and it only rhymes in the expected place half the time. His enunciation, breath control, modulation and innate sense of melody are honed from his background as a stage actor and his rhymes hit like a zoetropic subway ad for apocalypse cusping trap life so vivid it’s surreal. Very few rappers this fast are capable of pronouncing each word as fully as Diggs does.

I’d wager that a decent number of Clipping fans (I’m one of them.) have been calibrated for the group with favorable comparisons to Death Grips, which isn’t a flat out wrong comparison so much an underillumination. Both groups are broadly making noise-informed rap music that pulls from found sounds, field recordings and other non-traditional sample sources and isn’t primarily concerned with making itself approachable or even necessarily melodic.

However, they share ostensible barriers to entry with Death Grips more than they do a set of peggable sonics. In fact, they’d almost certainly still exist if Death Grips had never shown up at all. I can’t say if they’d be more or less famous without that reference point for new potential fans, but anyone calling them a rip off is being patently inaccurate. They’re a paralell synthesis: initially inspired by attempts to mix Merzbow with a David Banner accapella. They cite Music Concrete and The Smell’s decade plus legacy of envelope shredders and, by their own account anyways, they’re more likely to take inspiration from the process itself than to attempt to imitate anyone else.

The sense of space and clarity in their music is also very easy to underrate. For being something that’s often discussed in terms of impenetrability and abrasiveness, it feels like it has plenty of room in it. By comparison, Death Grips’ cumulative effect is the way sample grit and vocal durress make the whole affair feel filthy, monolithic and girded with budding throat nodules. Clipping’s samples and squiggles have been dioramaed into the mix instead of piled to suffocation depth. Clipping’s hits and static stabs might suddenly sound wet and corrosive as they hit your ear or might detonate, leaving the air laced with a blues that can’t quite be sung.

At the outset, Huston and Snipes set (negotiable) rules against building tracks with deliberate pitch systems or conventional drums. No one stuck to these rules long term, but It’s a blessing that everyone’s instinct for compromise and ear for collaborators was good enough to keep the distinctively bruising aspects of that ruleset present.

However, for as many ways as this album appeals to me, I feel like I have to be honest about the record’s not-inconsequential flaws as well. “Tonight” feels like a Drake-ian redo of the much-better “bullshit” from “midcity”. Six months from now, I feel like they’re gonna look back on “Body and Blood” as being way closer to Tyler the Creator’s “Dracula” than they’d like to have ever been. The third act of the record isn’t bad, but I doubt I’m the only one who could 100% live with this thing being 15 minutes shorter. The alarm clock that opens “Get Up” goes from neat to tedious to cool before harmonizing with a clone of itself and getting weirdly pretty; all tedium everything for plenty of people but satisfying if you’re contextually moved by the payoff (it just quits when the song is over).

The last track is interesting because it it disgorges a fully abstracted version of the band’s toolkit. In a subtle way, this makes it a skeleton key for the uninitated. In the same way that the opening primes you with the twin elements of mechanical indifference and virtuostic spitting, giving you a chance to acclimate piecemeal while simultaneously being gripped by the heady rush of the deep end, The last song lays the record out like a stained glass window that’s suddenly lost all it’s lead. I feel like I’m relearning some of what I just heard, blind-men-describing-the-elephant style. Unfortunately, it also feels like the point could’ve been made in 1:20 instead of 4:19.

However, it’s hard to deny the level of rigor, tenacity and intent they have going on. My initial reaction to Clipping’s aversion to to having their work seen as a “criticism” of hip hop was that, as artists who already had made well regarded work in other scenes and mediums, they were afraid of being seen as Hipster Carpetbaggers. What I’ve come to believe though, is that their motivation is really that they fundamentally see the genre as a conversation and themselves as participants.

For an example of what goes into a clipping song, check this out. They enjoy letting people look behind the curtain because, as fans, they wished the Bomb Squad had compiled an FAQ or that Pete Rock had put out a tutorial series. I’ve started to embrace the idea that, as everything goes to the cloud (be it zip lockers or streaming services) and as the means to make and share music continue get easier and more varied, that music is going to eventually be valued more as conversation than as a series of Monolithic Achievements and Grand Narratives just by virtue of the volume of stuff being made.

The DIY world that clipping come from is ahead of this. Noise artists are known to do runs of 10 cassettes with the edition number in glitter glue. The title is an inside joke that the 3 of your friends you give copies to will get and 7 others who buy it at a show will puzzle over and riff their own in jokes and future album titles on. “CLPPNG” has this sort of magnetism and sense of an organic world within it.

In one interview, it’s mentioned that there isn’t a high school uniform for the people that like clipping and that speaks to how wide-open things are right now. “CLPPNG” is not a masterpiece, but it is masterful in places. Time will tell if it ends up being influential, but even if they fail to blow up, they’ve introduced some very brilliant ideas to the conversation.