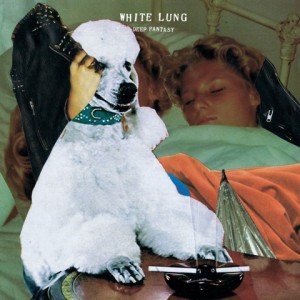 Punk has been up against it’s existential limit ever since the first kid said “punk’s not dead”, maybe even earlier, depends on which destructive appetites you value and to which ends. I’m going to skip the semantics and say the theoretical kid is right 30+ years later. I’m also going to not subject you to any subgenre bingo because that undercuts the relevance and ferocity of the record before us, White Lung’s recently unleashed LP, “Deep Fantasy”.

White Lung have been raising the best kind of Hell since 2008. They formed in Vancouver and initially made a name for themselves in the scene surrounding a DIY space known, as the Emergency Room. Spatially, it’s an appropos description of the music they make. It’s chaotic and compressed, incredibly ordered, and quick enough to be flexible at any defcon. If you’re phased by blinking human juices out of your eye before you can identify what they are, you don’t belong here. If you don’t want to think, it’s not a place you’ll go very far. Actually, you should probably make sure you don’t have anything in your eye before you hit play; you’re almost bound to miss things on this record by virtue of blinking.

That’s not to say that Deep Fantasy fails as compellingly dumb rock fun. The spines of these songs are musicologically tried-and-true. Punk implies those structures are newer than they are, which is to say that they’re timeless. They’re also overstuffed with every kind of pleasant surprise you can expect from a standard rock band configuration in 2014. When test pilots started to approach the sound barrier, the buffeting of the air on the body of the plane implied imminent disintegration. That’s the velocity White Lung operates at, finishing each song in 2 minutes. What this band has is a level of passion that can only be properly communicated by going inhumanly fast. The music shrieks, squeals and fishtails from it’s ideal vector, only to whip back and catch up with itself like a Pixar character regaining balance in the face of ongoing peril.

Mish Way has one of my favorite voices in music. Enthrallingly gnarly and caustic in all the right ways since the beginning, but never careless. On Deep Fantasy, however, she put in the work to get as technically on-point as she’s ever been. Hooks that would’ve been scissored into shape and driven with sheer volume on earlier records are barbed by the extra layer of control she’s developed.

Anne-Marie Vassililiou also strikes an impressive chaos/control balance on drums. Her snare hits feel unexpected, but powered through and decisive. There’s something playful and loose about her style and her interactions within each song, but she’s also executing all this with the hypercompetence of someone who means to do all of it. She loosens things just enough to let you question the integrity of the plane’s bolts, driving each song while also keeping the threat of unhingedness present. Without her, this band could not exist this comfortably at the threshold of sonic booms.

Kenneth Williams is the sort of flamethrower of a guitarist the other two members demand to be heard alongside. Any mere dispenser of riffy animal menace would be adequete, but Williams could conjure that from a nylon stringed acoustic. He builds addictive hooks and melodies with sqeals and trebly corrugation as much as he does power chords. He tortures the guitar for information and it shrieks.

Mish’s talents as a writer exist in parallell to Elvis Costello circa This Year’s Model; she delivers the venomy rush of personal animus, but she’s also politically engaged and aware in a way that reinforces their resonance and touches them to unexpected edges. A good writer can put an anxiety about gendered violence or a climactic battle with an addiction in your head; White Lung exists to insert it directly under your skin. Injustices Mish sings about are perpetuated unconsciously. You discover how good it feels to be carrier for something terrible in a moment of weakness. You catch yourself as a monster when you’ve already been acting monstrously. 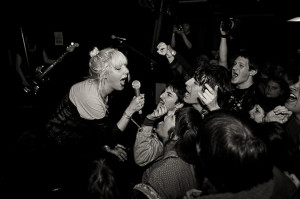 The obligation to question yourself as hard as you do the world you were born into is, to my thinking, one of Punk’s great intellectual legacies. Lazier bands tip this over into self-destruction and visionlessly exhausting nihilism. Hence, the wrecking of instruments, both bodily and inanimate. In a recent talkhouse article, Mish talked at length about the techniques that she uses when screaming. I’ve screamed in enough musically intended contexts to appreciate 2 things about this:
1)It’s easier and less painful than it looks
2)It’s harder to do it well and without injuring yourself than it looks

Mish both cracked this balance (and how to sustain it) and that’s what’s both enabled and consolidated the leap in musicality that makes this their best record yet.

To the new initiate question of why all the screaming, I’ll only say that it goes to the larger point of feminist ideology that plenty of other reviews treat it as their main point. White Lung rages at this level because they’re attempting to reach people on the other side of a crucible reaching a boil. We need art like Deep Fantasy more than ever not just because it’s superficially thrilling, but because it challenges us to change ourselves.