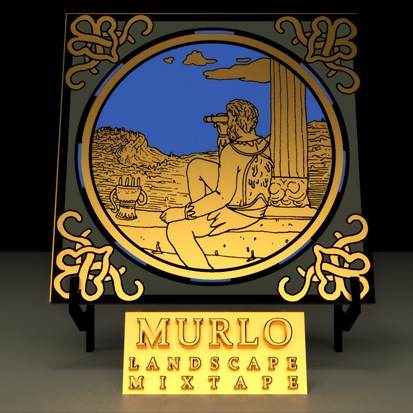 Son Raw’s physical is back in North America but you can’t trap his mind.

These days, DJ mixes are as common as trap releases on Dat Piff or white bro R&B at bad BBQs, but proper production mixtapes filled with all original material? Those are rarer than vegan meetups in steakhouses. Requiring both quality and quantity, the format is an ideal showcase for artists with ammunition to spare and statement to make, but sadly few take the time to craft such expansive projects. Enter Murlo, a producer who’s made an impact on virtually every interesting UK dance scene of the past few years.

Whether releasing on Crazylegs, Glacial Sound and Unknown to the Unknown, being fêted by the Boxed, Keysound and Butterz crews, or connecting the dots between Grime and Dancehall on a BBC guest-residency, he’s managed to spread his music across the Grime (and Grime related) world, a rare feat in a sometimes insular milieu. It helps that his sound is utterly unique – a mix of Afro-Jamaican rhythmic swagger and Asian motifs with just a hint of R&B sweetness. It’s a foundation ideally suited for longer-form excursions and his Landscapes release on Mixmag not only fulfills the promise of his previous singles, but points towards several intriguing possibilities.

Any number of forward thinking R&B artists looking to update the Aaliyah/Ashanti playbook for this decade would be wise to lock him down, but his harder edged 140 BPM material is just as ready for a bigger platform, should the wider dance music world be ready for music that isn’t stuck to a 4X4 beat. Then there’s his most out-there material, relying on Indian scales and near-ambient percussion, soundtrack work waiting to happen. That it all sits together seamlessly is a testament to how a cohesive sound doesn’t have to be a limited one. Essential listening.