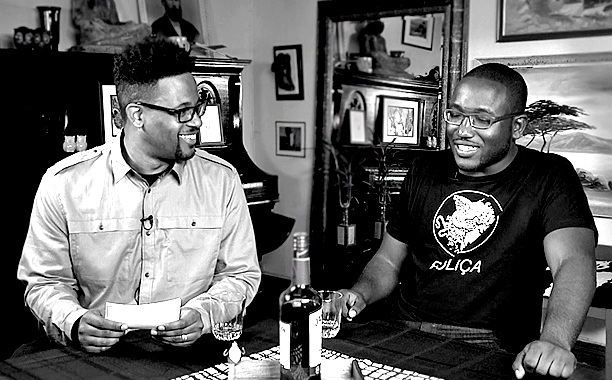 By and large, much of the talk about Open Mike Eagle’s latest opus Dark Comedy has focused on the first half of the titular equation. Few would deny that Eagle is hitting his full stride on what is sure to make innumerable “Best Of” lists come December. The man has made a name for himself with his simultaneously intelligent and viscerally insightful raps. With the release of the video for “Doug Stamper (Advice Raps),” it’s time we start talking about the second half of the title.

Partnering with fellow displaced Chicagoan and stand-up comic Hannibal Buress, the two offer sound and sage advice on what could be the world’s greatest write-in for suggestions show the world needs to see, the Advice Show. From not dating your cousin to the benefits of your mother-in-law buying your son weed to the importance of vision boards in planning a three-way, pretty much everything you need to lead a productive and meaningful life is there. I’m pretty sure we’d have peace in the Middle East, strikingly less terrorism and healthier fast food options if these guys were at more bargaining tables, but I digress.

From there, things get semi-serious as a droning syth sets the stage for OME’s sing-song flow, all against the visual backdrop of a manic social media feed homepage. (Nice shout out to Ron & Fez, by the by.) Mike keeps the lyrical bar impossibly high, dropping such gems as, “Always tell a lie to C.I.A. torturers/Never buy weed from a guy named Mortimer/Buy bank forfeitures and foreclosures/If you start to lose your hair skip the comb-over.”

Then, building upon the genius that was the Burt Reynolds/Dom DeLouise movies of the 80s, we close on a series of outtakes that are missing only Jerry Reed and a buxom Loni Anderson, otherwise we’re clearly talking Oscar-worthy material here. Open Mike’s days of having a long way to go and a short time to get there soon will be coming to an end. I foresee a Cannonball Run victory lap in his very near future.