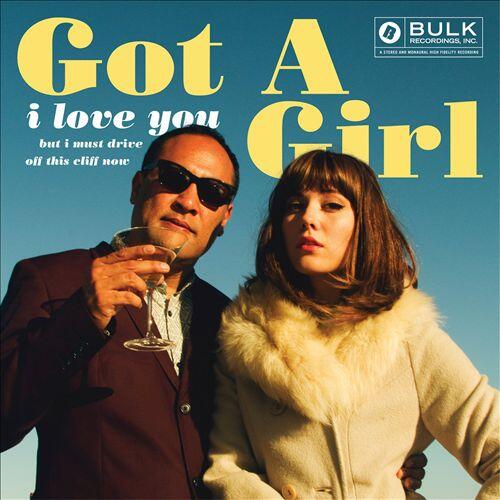 Chris Daly keeps Amelie on repeat like Scarface in his mansion

What could pass as the intro to one of the nerdiest, hipster jokes of all times actually happens to be a lighthearted, French bubblegum pop affair between the aforementioned hip-hop producer, Daniel M. Nakamura, and the actress, Mary Elizabeth Winstead. The two met during the filming of Scott Pilgrim vs. the World, found a mutual love in the sounds of 60s francophilic radio and decided to make music together. And thus was born Got a Girl and their debut, I Love You But I Must Drive Off This Cliff Now.

Whether it’s producing Kool Keith or the Gorillaz or himself performing in such acts as Deltron 3030 and Handsome Boy Modelling School, Dan is no stranger to offroading the normally beaten musical path. Winstead is the question mark here, having no wide scale work behind her. If you happened to see her perform in the International Children’s Choir or on Broadway years ago, maybe you have a better feel for her musical chops, but the rest of us rightfully can wonder, is this some weird vanity project or is there something more to it?

“I Love You…” falls somewhere between the collaborative works of Serge Gainsbourg and Brigitte Bardot and Dmitri from Paris’ “Sarebleu,” with a touch of early Zero 7 thrown in for good measure. While Winstead lacks the powerhouse delivery of Sia, this is not a heavy lifting project. Dan created light, airy beats that nicely compliment Mary Elizabeth’s breezy delivery. First single, “Did We Live Too Fast,” with its building, orchestral vibe, could soundtrack any number of James Bonds flicks where the evil villianess is named Chat Ronronner or some other such thinly veiled, sexually charged nom de plume. The rest of the album follows similar suit. Additional standout tracks include, “Da Da Da,” which seems to borrow heavily from Javier Alvarez’s cover of “These Boots are Made for Walking,” but allows Winstead to move from cooing to a more dynamically charged growl (and what good is French music if it’s not sexy?); “Last Stop,” with its piano trills; the bouncy “There’s a Revolution;” and “Everywhere I Go,” which gives Mary Elizabeth a chance to show a little vocal reach.

The lighthearted feel of the album spills over into the marketing for the album, too, as the duo has paired for a series of videos that offer audio glimpses of “I Love You…” while simultaneously hawking a variety of fake products (olive oil, wine, various fragrances), teaching the viewer how to poorly tie a bow tie and pushing a new way to open champagne with a saber. Ooh la la.