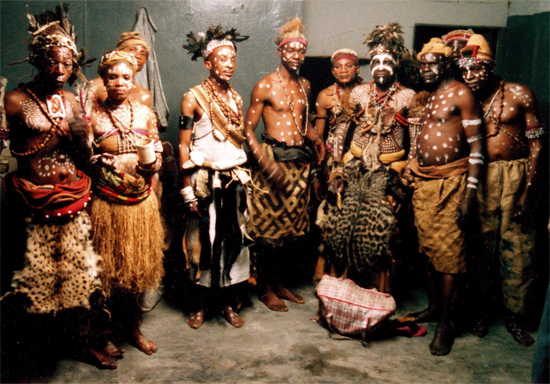 Peter Holslin was a pizza in a past life

There’s hypnotic music, and then there’s Kasai Allstars. Hailing from the capital of the Democratic Republic of Congo, this regional supergroup—whose 15 core members belong to five different ethnic groups, each with its own language and musical tradition—specializes in a mix of melodious xylophone, fuzzed-out likembe, crystalline guitar, polyglot vocals and buzzing, resonant percussion. This is the kind of music you want to listen to for hours on end.

The Allstars’ new album, Beware the Fetish, stretches out for an hour and forty minutes. It’s a slog to get through in one sitting, and yet, by the end, you’re still left with the feeling that you haven’t quite gotten the full experience. When the group performs live, there’s dancing, tribal garb, and cool-looking headwear involved. But no matter; it’s just as immersive and surprising on its own.

Beware the Fetish is the Allstars’ second album, and the fifth installment of the long-running Congotronics series from Belgian label Crammed Discs. The group’s previous album (released in 2008) is called, In the 7th Moon, the Chief Turned Into a Swimming Fish and Ate the Head of His Enemy By Magic . Six years later, the group still has a gift for conjuring a kind of contemporary mythology, painting vivid and whimsical pictures with song titles like “The Chief’s Enthronement: Oyaye,” “Yangye, The Evil Leopard” and “As They Walked into the Forest on a Sunday, They Encountered Apes Dressed as Humans.”

Though the album is clearly steeped in tradition, it’s a definitively modern work. I’m transfixed by the band’s cavernous grooves, which sound like they could’ve soundtracked a village wedding party in the bush 1,000 years ago. But just as compelling is the bluesy, amplified thumb piano of “In Praise of Homeboys,” and the circular, super-clean guitar of “Yangye, the Evil Leopard.” And those guitar parts—redolent of the Congo’s always-evolving soukous tradition—can hold a candle to any of the licks you’ll hear on the latest party jams coming out of Kinshasa.

For Western listeners, the most remarkable moment on the album might be the closing track, “The Ploughman,” which beats American garage-psych bands at their own game with a hard-stomping 4/4 freakout of ecstatic chanting, exploding guitars and blown-out thumb piano riffs. “Hypnotic” is a word often used in music. I invoke it—and overuse it—plenty myself. But this is a band that truly understands the techniques, dynamics and pathways involved in putting a listener under one’s spell.