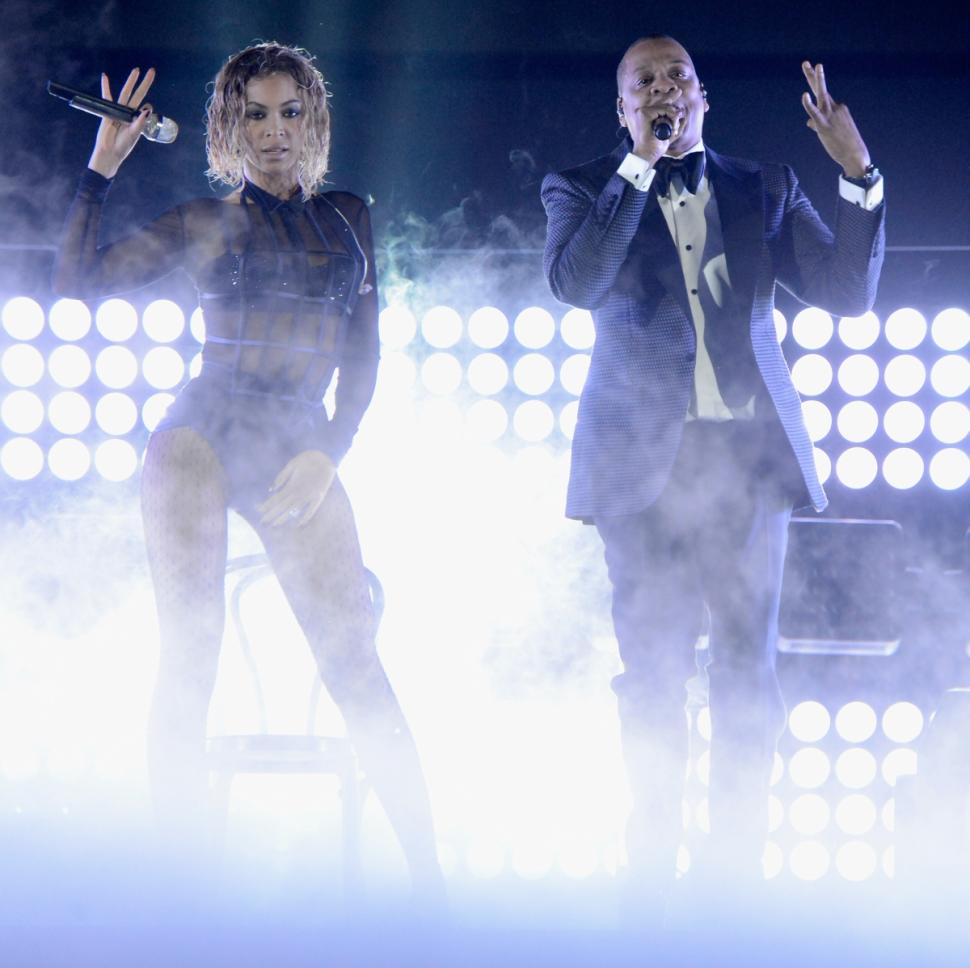 Abe Beame got you looking so crazy right now

I’m going to risk pretension by stating that while I’m not immune to following the lives of the artists I follow, it’s their work that matters most to me. TMZ culture has changed the way we interact with celebrity, the lives of the artists we love inevitably bleed into the work they produce, but I’d like to think, for instance, that I don’t care about Robin Thicke winning back Paula Patton as much as I care about the album inspired by that pursuit. A great breakup will never trump a great breakup album.

The thing I always respected and admired about Jay-Z and the artist formerly known as Beyonce Knowles was the way they seemed to understand and toe the line between public and private. Their relationship simmered, off camera, without tabloid or a hybrid moniker. They might occasionally appear on one or the other’s project, but it was almost inevitable. Even if they weren’t a couple, you’d expect the two most famous black pop artists on the planet to wind up on a song together. You’d never expect to see the pair make a spectacle of themselves, to open themselves up to Miss Info and the coterie of second guessers and speculators, to make a Best Of Both Worlds cash grab. That is, until now.

As someone who has been attending live Hip Hop for seventeen years, and bought Sean Carter’s best album the day it was released in stores the Summer of 1996, it’s somewhat surprising that I’ve never seen the man live. He’s a tough ticket here in New York. Sure to be an expensive hassle, almost certainly a letdown, particularly now with his career on an inevitable creative downswing. I’d felt it was simply too late to make the effort; he’s a restaurant whose critically acclaimed tasting menu has doubled in price. Why not go see Nas, an old reliable favorite, at some great old venue in midtown around the holiday season for half the price?

In many ways, it was Jay’s wife that attracted me to the second night of their tour stop in North Jersey. Beyonce had spent most of her solo career boring the shit out of me. I had always felt that pop critics used her as a rallying cry, the great, old studio system big budget pop music they could support without apology. What I heard was several albums of scattered singles, always smacking of the moment in which they were made, surrounded with unexceptional filler. People often refer to the voice as an instrument and I never felt that label was more appropriate than when applied to Beyonce. Her singing was clean and cold, something she could pick up, play the notes and set down without ever really putting any of herself into it.

That all changed with the surprise album she sprung on us at the end of last year. It was an end to end “ALBUM” with mood and theme in the classic rockist sense. Here she was, the biggest pop star on Earth, making interesting decisions, taking detours, moving beyond her comfort zone. She wasn’t simply jutting her jaw, placing hands on hips and channeling “Sasha Fierce”; she was introspective, insecure. It was the most secure I’d ever heard her. The album was a hit, commercially and critically. She came into this tour with a firm mandate, as great as she’s ever been. I’d never seen Beyonce live but I wanted to see if that confidence extended to her floor show, if there would be more to see then polish and shine.

And so JeyBey rolled into a football stadium just across the Hudson on a balmy Saturday night. The wind, so calamitous to kickers visiting the Jets in cold weather months, whipped pleasantly around the stadium, carrying THC vapor and the salt and butter perfume of its concession stands. The crowd was young and eager. They had paid a fortune for their tickets, their concert swag and their croctails. It was a choir ready to be preached to.

While I’ve voiced my reticence to find meaning in the personal muck of the lives of artists I enjoy, there was a particular temptation to do just that when a married couple hits the road together. There was the inescapable Solange elevator assault a few months ago to consider. My wife informed me Beyonce had changed the lyrics to one of her songs in Ohio, seemingly aiming an otherwise innocuous song at Jay, hinting at indiscretions. How much of this is to be believed? How much is created by the media? How much is created by the couple themselves to stir shit and sell tickets? This is precisely why I find speculating on the intimate details of celebrities’ lives to be a fool’s errand. Who can possibly know? As far as I was concerned there was only one question that really mattered: How would this all play out on stage?

What we were treated to was the exact sort of empty, high gloss I had feared. Throughout the event, Mr. and Mrs. Carter tag team the stage, taking turns, occasionally lingering for the hits they’ve accumulated together throughout the years, but for the most part treating their sets as two independent shows that happen to be running on one stage concurrently.

For me, Beyonce proved once and for all that the success of her last effort was merely an intelligent act of choosing producers and songwriters to put herself in the hands of. Her entire stage show seemed to service Beyonce the Sex Symbol, Beyonce the Maker of Hits. There was no room for Beyonce the Person. Watching her, you get the impression that stage choreography is not limited to dance steps and hip swivels, but to hair swipes, the flicking of a tongue, beats in conversation. You feel she might consider an act of spontaneity, of energy found in a moment, to be a gaff in professionalism, a lack of discipline. Throughout the show, a black and white film starring the couple acts as segueway between set pieces. The film is a mess of Tarantino, Stone, and Madonna’s sex drenched 90’s videos. It’s a clear omage to the narratives Kanye West creates for his tours. That is, all the self importance and pretension, with none of the danger, or risk that he makes habitual in his live performances.

It’s a good time to mention Mr. West. Scores from his songs played throughout the night (Jay cued up their collaborations constantly) but he, nor any other guests, appeared. Of course when Jay-Z and Beyonce bring no one on stage it’s deliberate. The night was all about servicing their egos, no room for anyone else to shine. A pity because the show could use a breath of air from an M.O.P. here, a Rick Ross there.

But for me, the most difficult part of the show was Jay-Z’s contribution. He mainly served as a distraction as Beyonce changed wardrobes, though he had a disturbing number of costume changes himself. The majority of his setlist hailed from the decline of his catalogue. Current shlock. It’s what you have to presume the couple believes the majority of their audience is old enough to be familiar with. Predictably, his two biggest responses came from his deepest digs, “Jigga (My N*****)” and “Hard Knock Life”. Anyone who came hoping for a random “Where I’m From”, or even “Feelin It”, went home disappointed.

I realize I’m giving the impression this was a bad show. It wasn’t, at all. Beyonce’s stepford wife perfection is mesmerizing, and Jay, even in his gaunt, Christmas Past iteration, is still a seasoned live act. Between them the two have enough hits to fill entire second three hour performance. But I expected more from the evening. Tension, excitement, surprise, of any kind. There was little to none. Not so much as an encore. The pair have all the chemistry of Kevin Spacey and Robin Wright. The show bordered on the transactional.

There was one moment, however. The night closes with “Forever Young”, a throw away from the end of The Blueprint 3 with a sticky, resonant chorus. Beyonce sung to her husband as a reel played on the big screen, home videos chronicling their relationship. After a few minutes, their daughter makes an appearance and she transitions to what is still my favorite song in her catalogue, “Halo”. For a moment, the two stand with their back to the crowd, arm in arm, watching their daughter grow up on screen as Beyonce sings to the image. It’s a powerful moment. You feel included in it with them, as if you’re getting a brief glimpse into the lives of these powerful people when the cameras are off. It’s intoxicating.

Then, as they walk off the stage, Jay-Z throws his arm around his wife and she coldly offers him the corner of her forehead to plant a kiss. You remember these people are strangers, that the song, the film reel, the moment, is just as coordinated as Beyonce’s dance numbers. That before this evening, they’d locked arms to watch Blue Ivy with their back to the crowd in Miami, Cincinnati, Foxborough, Philadelphia, Baltimore, Toronto, and even East Rutherford, the night before. They’ll do it eleven more time between now and early August. Then, you’d assume, they’ll do it in Europe. The cynicism, the manipulation of the gesture will bother you long after the show is over. And as you head through the parking lot and the mid summer night, the only real question you’ll be left asking yourself is when was the last time the Carters had sex.