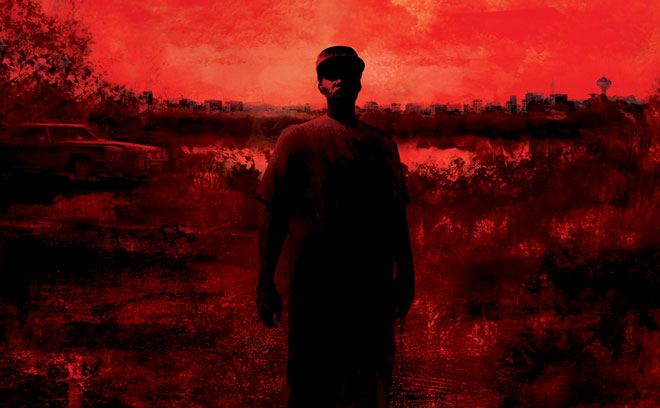 “‘Bama.” My Texan housemate uses it as both noun and adjective. Not to be confused with “bammer,” “‘Bama” is supposed to simultaneously connote inferiority and desolate, country bumpkin simplicity. An example: “He’s from some ‘Bama ass part of Texas.” Gene the Southern Child, who hails from Florence, Alabama, has a new album, Southern Meridian, an exploration of a ruinous life in “Flo Town,” a small town known primarily for its close proximity to Muscle Shoals. Flo Town may not have the rap pedigree of Huntsville, 70 miles to the East, but that’s proved no impediment to Gene the Southern Child’s excellent and unique Southern Meridian.

The title Southern Meridian is a deliberate homage to Cormac McCarthy’s novel Blood Meridian or the Evening Redness in the West, a sparse Western which follows a nameless protagonist, “The kid,” and his journey with scalp hunters along the Southwestern borderlands of mid-19th century America. In an interview with Tiny Mixtapes, Knowledge, of the album’s production trio Parallel Thought, shed some light on the McCarthy influence. “Blood Meridian just kept creeping into my mind, how straightforward and intense the novels is; the complexity of what initially appears to be such a simple story is similar to this record.” Gene and Parallel Thought’s attempt at recreating the atmosphere of McCarthy’s slow-burning tale of death is, as much as one would want, successful. Cowboy-themed rap songs are usually too ridiculous to be taken seriously, as Bone Thugs-n-Harmony can attest, but Western themes of ugliness, murder, thievery, etc. translate well to a genre in large part concerned with misconduct.

“Calvary Dust” is the fullest realization of McCarthy’s bloody influence. For four minutes, sans chorus, Gene raps over a twilight-toned beat partially comprised of what sounds like nature recordings of the Southern woods. It’s commendable production work by Parallel Thought– the dulcet tones of bird calls and natural night time rustlings lend a sense of unknown, just out of reach menace to Gene. Not that Gene needs it– he’s a pathologically calm rapper, whose languid drawl and smooth delivery allow him to unfurl rhymes effortlessly. On “Calvary Dust” Gene raps “On the page of an age where I understand life/ You ain’t too far from foul/ It get too hard to smile/ Think I wont spark with pow/ Bitch, I’m the darkest child/Now you a target, clown.”

It’s commonplace for rappers to portray themselves as villainous; the vocabulary and stock scenarios of wrongdoing are well-tread fallbacks for rappers with little to say. That isn’t Gene’s schtick; he doesn’t traffic in obviously theatrical thuggery, but stone-faced hardness on the verge of cracking. On “Split Personality,” Gene raps over brass blasts a la “Pocket Full of Stones” about, well, both sides of his split personality. While not entirely original, “Split Personality” is a statement about who he is as a rapper; Gene isn’t a rapper for whom violence is a crutch, but heavy, serious subject matter. When Gene raps about darkness and crime, he’s loosely following the footsteps of the South’s most horrifying rappers, Three 6 Mafia. This isn’t to say Gene is entirely immune from the sonic hallmarks of the present-day South.

Southern rap at present has two loosely defined camps. Team Bando, co-captained by Future and Migos, is hyper-colorful, uncontainably enthusiastic music made for leg day at the gym and pussy popping day the club. Team Country Pimp, captained by Big K.R.I.T.,* is soul music-sampling and occasionally introspective rap, usually by dudes from small, country towns. Gene the Southern Child is, largely, in the latter squad, but “Smackman,” the album’s lead single, expertly toes the line between Bando and Country Pimp. “Smackman” is an arpeggiating, drum rolling, shoot up the whole gotdamn block type of track. Less talented rappers would approach the beat without restraint or rhythm, but Gene’s stolid style accentuates the instrumental with the proper amount of spine chills.

Gene and Parallel Thought deserve all the plaudits for Southern Meridian. The album feels both complete and compact, a testament to the experience and restraint of both the rapper and producers. In an era of rapid fire mixtapes worth downloading for two or three songs, it’s extremely satisfying to hear a project well-considered from first song to last. Gene may be from ‘Bama, but his album ain’t “‘Bama,” and, at the hardly princely sum of “Free,” you can’t afford not to download Southern Meridian.

*Coached by Bun B, obviously.