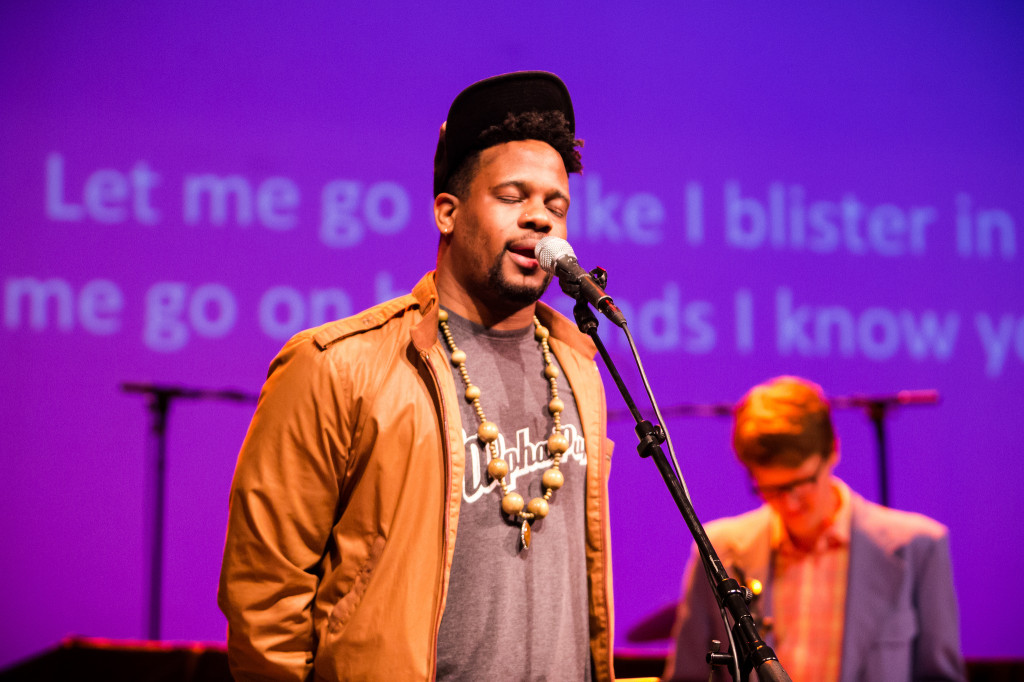 Passion of the Weiss spoke with Mike on the phone from his home in Los Angeles.

Thanks for speaking with me today, Mike. I want to kick off by asking you: What’s changed in your approach to music over the last year?

I’m not sure if how I approach an album has really changed, but I would say this album [Dark Comedy] is different than how I approached my last one, because this album is a collection of songs I’ve been making over the past few years that I felt was a package, I felt that they belonged together. I spent a lot of time with them. I would that also say that, internally, I’m not as worried about making sure that songs sound alike aesthetically. I used to be very concerned about that. In the past I wouldn’t have put a song like “Doug Stamper” on the same album as a song like “Idaho”, but I’ve come to embrace the contrast. I don’t feel like it has to be one mood throughout.

Yeah, he made all the music other than a couple tracks [3, 7] I co-produced on 4NML HSPTL. With this one, I made music with a bunch of different people and assembled a collection of what I thought were the best tracks from a two-year period.

I think that’s kinda what it is, but the thing is when we talk about the “core elements of hip hop” or “hip hop song structures” or whatever make a hip hop song a hip hop song, I look at that differently than other people. I don’t think I look to hip hop and expect it to do the things other people expect it to do. Like, I keep hearing the word “banger” tossed around, like something an album needs is a banger or a bunch of bangers, but I’m not concerned with that, you know? I don’t care. A rap beat to me is just whatever somebody wants to rap over. I’ve had songs in my catalogue where it’s literally rapping over acoustic guitar loops and drums. I’m not very concerned with what I’m starting to understand is the traditional idea of a banger or a big hip hop beat. I write raps to whatever I want to rap over and let the music inform what I write about. I would definitely consider myself to be making rap songs, hip hop songs, but I’m not sure if that means the same thing to me that it means to other people.

What’s your favourite song on the new record?

That’s a very good question. It changes a lot, but I’m going to have to look at the CD real quick. Right now it’s “Very Much Money”.

That’s my favourite, too.

[Laughs] Good! Kinda interesting that we would agree.

On Dark Comedy it seems as though you made an effort to sing more harmonies than on your previous albums. Would you agree?

If you were to ask me before I had time to go back and do some research I would say it’s about the same, except for the fact “Idaho” is basically sung raps. But I feel like I’ve had tracks that have done that before, too. I would say no, but that’s before I go back and really listen. And that might be the case. I know I’m a lot less scared to do it than I used to be, but even then I go back and listen to some old songs and hear singing that’s really bad! So even if I was more afraid to do it then, I was bad at it and I did it anyway. So I don’t know. It’s kind of an odd journey I’ve had with melodies. It’s always been something I wanted to use and incorporate. I think I’m more comfortable with it now. It’s something I’d do without a second thought now.

It definitely sounds like you’re more comfortable with it now. Are there any artists you drew influence from before singing?

I think my singing brain actually comes from a lot of the indie rock I grew up listening to, and still listen to. I hear a lot of Bob Mould in the way I like to sing things. Of course, They Might Be Giants, because they’ve always embraced their own voices no matter how non-traditional they are, so I approach singing the same way. I’m not too concerned with being pitch perfect, I just kinda want to express the melodies like I express the raps. It’s just something in me that wants to come out.

Some of the most revered singers – Neil Young, Michael Stipe and others – have imperfect voices. It lends an authenticity to the music.

Yeah and that’s what has guided me, that same kind of style. Not that I’m as great as those people are, but I think that’s the right spirit to use. What I tried to do before, and even on this album, is bring people in to the studio to sing parts, but a lot of time it became difficult to explain the type of character I’d like the vocal to have to another person.

There are only two features on this album. Were you hesitant to bring in too many other voices?

I’ll tell you, the honest truth is, I don’t like talking to people about my musical ideas, I just like making music. I don’t like to try to explain to somebody the particulars of a concept that I’m imagining while I’m writing it. It really takes the fun out of it for me. The particular nuances and direction of the songs are very hard to communicate. Both of the features on this album got it quite easily, but for the most part a lot of the creative process goes on in my own head, and it has to develop there and then by the time I’m done with it, then I got two or three verses of my own already. Usually that’s all it calls for.

You’ve spoken about the “L.A. sound” before, how Los Angeles is at the centre of changing how hip hop beats are produced, blurring the line between electronica and hip hop. Considering hip hop is a relatively young art form, do you think these new sounds mark the natural progression of the music in its history?

What do you mean by that?

If I were to tell you all of my favourite rap albums of all time, none of them could really be made today. Midnight Marauders, that album could not be made today. No record label would invest the money to clear all those samples, it just wouldn’t happen, it wouldn’t see the light of day. We’re at a place right now where producers are scared to sample, labels are scared to put out music with sampling in it, the people who do own music want ridiculous fees from those who use the samples. So the music now has to come about in a more organic way. There’s a lot of electronic music happening, a lot of synthesizers happening. That’s just where things have to go for people to continue having careers and I think the way L.A. has done that is very interesting and good for the music. But at the same time, I miss rappin’ over songs that I like, I miss that.

The sixth track on Dark Comedy is “Doug Stamper (Advice Raps)” – is that named after the character on House of Cards?

Absolutely. I like the character a lot. I like what he did on the show. He was my favourite character on it. He’s an advisor, you know what I mean? He kinda goes around telling people what to do. He’s a fixer. He’s like If you don’t do this, X, Y, Z is gonna happen. And he’s twisted too which is why I really like him.

Tell me about your relationship with Hannibal Buress. How long have you two known each other?

We went to college together, so I’ve known him for 10 years now. I was rapping when we met, and he had just started doing comedy, so we were both just beginning. He was on my first album too, a lot of people don’t know that. He did a verse on the interlude “What the Fuck Is Art Rap?”

What’s the importance of having a strong independent hip hop community, especially on the West Coast? Why is Project Blowed central in fostering rap music in the city of Los Angeles.

L.A. is a very disparate place, everything is very spread out, so the way things work organically in the city is that there are all sorts of pocket movements going on. Project Blowed was a very important place because it created a space for many people to come together and share styles, share influences, share fans. Even on a more basic level than that, it was always good to just have a place to go and rap. Like, no matter how big your career had become – whether you were signed with a major or just got off work – the place was there for everybody. It was a place to go and practice the art, to stay sharp, to get your chops straight. Kinda how jazz musicians meet up at certain clubs and jam, it’s that kind of thing.

Do you find yourself being a mentor for younger artists now?

In a sense I am. I don’t come into contact with too many younger people now, but occasionally I do and I like to give advice to people about their talents while they’re just spinning their wheels trying to get started. It’s kinda hard. It’s very bleak right now. There aren’t too many hopeful things happening for young rappers, especially if they don’t have capital. It’s very hard right now. YouTube is one of the only places you can go and do your own thing without a label or sponsorships. But then you need consistent video production, and it’s hard to do that without very much money.

What are you listening to right now?

I would say a lot of old music. Before I go looking for new stuff, I go check out classic things I might have missed. So I’ve been listening to T. Rex’s Electric Warrior a lot, and I’m also digging into Daniel Johnston’s stuff. Newer stuff? I just bought that last Arcade Fire album and I’ve been playing that a bit. Youth Lagoon is another band I’ve been listening to lately. And yeah, whenever one of the homies drops something I’m super into that. Milo’s new record is about to come out, Busdriver’s new record is about to come out.