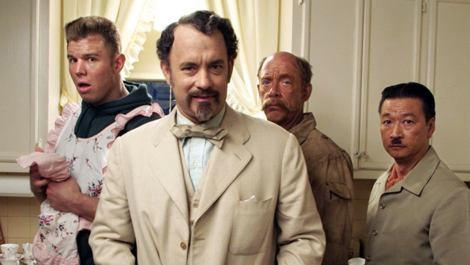 The Ladykillers, an in name alone remake of an Ealing studio comedy from the 50s, is often derided as the low point in the Coen Brother’s early-aught lull for good reason. It’s a Southern slapstick, leaning on a Tom Hanks huckster caricature and poo jokes to tackle the Coen’s tried and true themes of human greed, plots gone awry, fate and mortality. It’s a Coen Brothers film that was sucked through a portal to toon town.

What most don’t seem to realize, because the film came and went, is it lives as the neglected middle child in the Coen’s American music trilogy. Four years earlier the Coen’s made O Brother, Where Art Thou?. That movie, suffering from similar wackiness, came off thanks to a mixture of an inventive reimagining of The Odyssey and Clooney star power, but it was most notable for its soundtrack, currated by T-Bone Burnett.

The soundtrack is a survey of Depression era bluegrass, with several vintage tracks, but many more updated classics or newly penned reimaginations of the era in American music. The soundtrack was recorded before the film and largely informed the proceedings, rather than vice versa. Incredibly, it went on to sell upwards of seven million copies and won the 2000 Grammy for Album of the Year.

Burnett has been something of a muse for the Coen’s, first working with them on The Big Lebowski, but returning every few years for a music themed project ever since. Last year, they reunited for Inside Llewyn Davis, a loving tribute to the ’50s Greenwich folk scene.

Davis is the best, most complete movie of the trilogy, and a great soundtrack. It follows the Burnett/Coen formula of a few representative, somewhat obscure tracks from the era blended with new recordings that are either updates or songs that sound like updates, such as Justin Timberlake’s absurd and absurdly catchy “Dear Mr. Kennedy”.

With The Ladykillers, Burnett and the Coen’s tackled black Southern gospel. They find inspiration in the Soul Stirrers and Blind Willie Johnson, whose moving recordings of “Come, Let Us Go Back to God” and “Let Your Light Shine on Me” arguably surpass the modern covers included with them on the soundtrack. But what’s most inventive and surprising about the soundtrack is the presence of Rap.

The film features Irma P. Hall as Marva Munson, an archetypal Southern church going black woman who is heard throughout the film deriding “Hippety Hop”. I came into the film knowing little about its subject and nothing about its soundtrack, so upon first viewing I felt disappointment that the Coen’s had placed such a wooden, antiquated view on Rap in their film. Of course, I’d fallen into the trap of a trademark Coen dodge, as the soundtrack (Executive Produced by the Brothers) features nuanced and inspired choices in rappers as well as the source material they’ve been paired with.

The Southern fried Nappy Roots were a perfect match for a gospel inspired project, and their three songs, one of which feature an actual Gospel hook, are uniformly great, and not at all out of place when considering the soundtrack as a whole. Phonte and 9th Wonder are another sneaky good pic for a Gospel collab, and Little Brother’s contribution, “Sinners” arguably surpasses the Nappy tracks with its dusty, unadorned boom bap backbone.

The other two Coen soundtracks in their American music trilogy have gone onto greater acclaim, perhaps because they’re attached to better films, perhaps because they’re focusing on music that has a larger, secular, whiter demographic. As standalone albums, I would argue the middle sibling is the most interesting, if not the best, because it actually makes a fairly compelling argument: That rap is a genre wrought in the tradition, containing the soul, of even the most spiritual black music that came before it. That you can be rapping about crack, or singing about righteousness, and at the core, be talking about the same thing. This may be common sense to the rap historians trolling this site, but for a pair of auteurs from Minnesota, offering it up without commentary, its pretty remarkable.