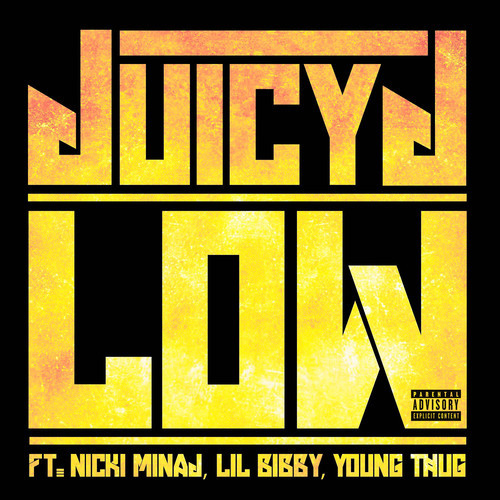 Oh hi! You really thought I wasn’t going to write about Juicy J’s new single? I’m offended but I’ll let it slide because playas fuck up too. Between the incessant promo on Twitter and the line-up on ‘Low’, it’s safe to assume that Juicy J and his label are betting the house on this shit. Ain’t a thang wrong with that, but forced efforts tend to lead to lead to mediocre results – just ask T.I.

If you’ve monitored this space for long enough then you know that Juicy J is part of my Holy Rap trinity, along with Nas and Freddie Gibbs – so I’m kinda biased when it comes to his work. That said, I haven’t been excited by much of his output since he dropped his fantastic album last year and I was a little terrified that I’d find this single disappointing, given the kitchen sink lineup – especially Dr. Luke on the beat. Dr. Luke is the pop gawd of the moment and I know that he was with the good folks at Rawkus back in the day, but I’m not sure I consider those qualifications sufficient enough to launch a rap single for one of my favorites.

I’m glad to state that my fears were utterly unfounded. Lemme just go ahead and let y’all know that I fuck wit this shit very muchly as fuck. My biggest fear had to do with the beat but I happen to think this shit is fantastic. It’s different from anything else we’ve heard in a minute – at least in the big budget rap world – and while it has some of the poppy elements Dr. Luke is notorious for (those rising EDM-lite synths on the hook), I think the minimalism on display more than makes up for that shit. As a matter of fact, this shit almost sounds risky for a rap single in 2014. I wasn’t expecting that at all and I’m glad. I mean, this shit might have ended up sounding like Dark Horse 2 or some shit. Let’s all look up to the stars and thank Pimp C that that didn’t happen.

Then there’s the rapper of the moment: Nicki Minaj. I have a sneaking suspicion that this song or parts of it were probably meant for a Nicki single, given that she’s supposed to have 5 or 6 Dr. Luke beats on The Pink Print (we can write off the rap classic shit right now), but she couldn’t figure out what to do with it beyond her verse and Juicy J vultured that shit. Nonetheless, when she’s in the mood, she’s fantastic and her verse is fantastic on this shit. Too bad her last 2 singles aren’t nearly as good as this verse. Thankfully for her, it won’t matter and she’ll keep stacking those Ws.

Juicy J has always been a generous mentor and it’s nice to see him extend his reach beyond mentoring producers (for the umpteenth time, most of the rap producers winning right now grew up listening to Three 6 Mafia) into giving Lil Bibby a look here. Then again, they might be on the same label and you know how the rap game is sometimes. Whatever the case may be, I’m happy to hear Bibby batting clean-up on this shit. He sounds like he belongs on this shit.

Young Thug doesn’t really need the help since he’s arguably the most prolific, fascinating and inventive hit maker of the moment in rap. His contribution here isn’t as dominant as it tends to be on most of this appearances, but there’s something to be said for restraint. I’m a big fan of that shit. For instance, I would totally pay Quavo (he’s one of the Migos – I know, that’s a deep black history gem) his full quote just to have him adlib and NOTHING ELSE on a song for me. But I don’t rap. I’m not even sure that I can say that Young Thug did the hook on this shit since Juicy J also seems to have a hook/is part of Young Thug’s part. Whatever the fuck is going, I like it. I like it a lot. Same with the rest of it – in case you still haven’t realized that. The ONLY issue with ‘Low’ is that it isn’t Shmoney Dance friendly. Trust me, I already tried.

So there you have it. I’m effusive as fuck about ‘Low’. Can’t help it. And you know what’s really funny? I haven’t even heard this shit in the club or car yet. I’m pretty damn sure that this shit is gonna GO in the club – every kind of club. And the radio – once they remove that brick reference Young Thug made. If I’m in the right mood, I’ll rewrite this whole thing on Sunday just to see how much I can annoy y’all with the stanning. Here’s hoping we all hear this shit while we’re impaired this weekend.