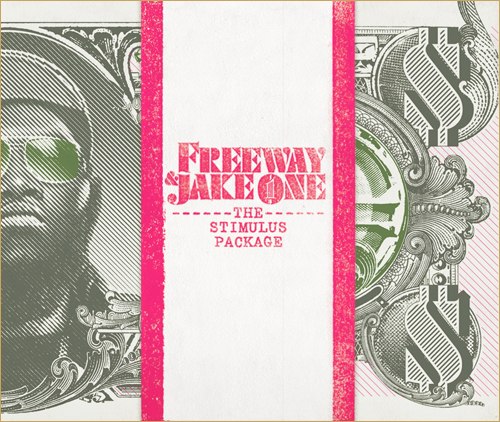 The Stimulus Package comes in a fancy collectors edition with a money clip. It’s a collaboration between a guy who once worked with Jay-Z and a guy who was last seen working with MF DOOM. It’s also released on (OMFG!) Rhymesayers, an indie label best known for, ahem, white people Hip-Hop. None of this is remotely important unless you’re a music writer trying to position the album into a predetermined critical worldview. In fact, all of the above should be completely and utterly irrelevant to 99% of the listening population.

What IS important is that The Stimulus Package is a very good rap record regardless of the circumstances that birthed it. Freeway’s flow is more agile and interesting than nearly all of his contemporaries, growling and bouncing off the beat with fierceness reminiscent of the golden era. At a time where rappers either want to be dead serious or constantly goofy, Free is at his best when he’s so fired up his high pitched voice is as propulsive as the beat he’s spitting on.

He’s spent the past few years perfecting this style, following the same “flood the blogs” approach to career development as Lil Wayne. Whereas Weezy’s hit or miss approach depends on the exact combination of drugs in his system, Freeway’s been steadily improving, treating the blog-rap circuit like training sessions. This Eminem name-dropped, Jay, 50, Slug and Birdman cosigned bearded Philly Muslim will eat your favorite rapper alive and were he to take the traditional path to E1 records and drop your standard indie rap jawn, it would still be better than anything in its weight class.

Thankfully he went another route however because it took Jake One’s unified production and quality A&Ring to knock The Stimulus Package out of the park, making it one of this young decade’s earliest and happiest surprises. Never attempting to match Just Blaze’s bombast from Philadelphia Freeway, Jake One’s beats update The Blueprint format for the post-Dilla era with cracking drums and soul samples that bridge the divide between Ant’s work with Brother Ali and previous State Prop releases. One of the few contemporary producers able to put the “boom” in boom-bap, Jake One doesn’t reinvent the wheel but he does zero-in on the exact qualities that Freeway needs in a beat, from dusty truncated melodies to rock-solid percussion.

He knows how to build an album too: the Stimulus Package’s first half showcases Freeway’s personality and songwriting without ever feeling forced: a live show burner, a song for the ladies, an anti-snitch anthem, a bit of storytelling over a track that HAD to be meant for DOOM, etc. The back half is dedicated to expanding his worldview featuring Bun B, State Prop and a breathy Latoya Williams for the album’s sole R&B spot among others.

What’s exceptional is that these tracks make perfect sense in context of the album: the Bun collabo Sho’ Nuff modifies the album’s Philly Soul template just enough to make room for Pimp C style pianos. Microphone Killa veers towards bombed out east coast 90’s beat-science. Money sounds like the best Aftermath track to escape Game’s clutches in half a decade. Yet every one of these tracks sounds like the intended part of a unified whole, a rarity in an era where any shmuck can find beats on myspace and drop a hodgepodge of thug clichés and played out drums.

Bridging these gaps in a divided rap scene may just be Jake One’s single most impressive trick. Case in point: “Follow My Moves” with Birdman, who somehow manages to acquit himself nicely over a beat that recalls late 90’s Mannie Fresh production as reinterpreted by a backpacker. This track should stand out like a sore thumb, a token attempt at a different demographic, instead the only disappointment is that we didn’t get a Slug verse to complete the mindfuck. (How about a remix?)

But if the beats and rhymes aren’t enough for you then get it for the life. Long overshadowed by the fire and brimstone gravitas of cosigner Beanie Sigel, Freeway has become one of the rare emcees that can balance the seriousness of a drug PSA with Menace to Society references and hockey-pokey adlibs. Say what you want about the state of Hip-Hop, the recent economic downturn has left most emcees sounding like they’re in it for the money, either joylessly slogging through another song or calculating every syllable to maximize profit and increase their market share. Whether it’s quoting KRS-ONE, shouting out Black Sheep or dedicating the outro to his fans, Free sounds like the rare emcee who still loves rhyming and his infectious enthusiasm may be the secret ingredient that makes this the best rap record since Raekwon brought back the realness. If we’re lucky there might be a better Hip-Hop joint this year, but I sincerely doubt there’ll be one that’s more fun to root for.