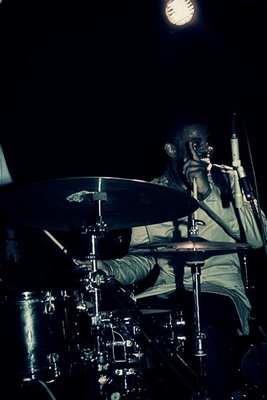 Boycotting American radio might be the wisest decision. Satellite was supposed to be the great equalizer, but despite the promise of Bob Dylan waxing philosophical about catfish, I’m not willing to fork over $20 a month to hear Martha Stewart, Nascar and Oprah boosting Precious. And it’s not like Sirius has come running to me with offers to host blog radio either, or really at anyone willing to play non-Shade 45 approved rap (not to impugn the blog radio shows, some of which are excellent). KCRW is cool–they played The KLF’s “3 a.m. Eternal,” at 3 a.m. early Sunday morning, thus ensuring my eternal gratitude, but let’s be real, Jody Rosen wasn’t all that far off. Locally, Dublab are really the only ones holding it down.

Indeed, it’s particularly inexcusable why week-after-week, the BBC 1Xtra snares some of Los Angeles’ brightest talents to drop insane mixes studded with exclusive never-before-heard cuts. Two weeks ago, it was Dam-Funk and now it’s Detroit-born, LA-based producer/percussionist Karriem Riggins, lacing Benji B’s show with a slew of rarities: collabos with Madlib, Black Thought, his own material, and a cut from Ahmad Jamal for good measure. The interview also delves into his time spent working with J Dilla, Erykah Badu, and Common. The Benji B portion of the show is similarly excellent, including cuts from Raekwon, Hudson Mohawke, Marcus Belgrave, and Dam-Funk. I’m even willing to forgive the guy for playing Drake.