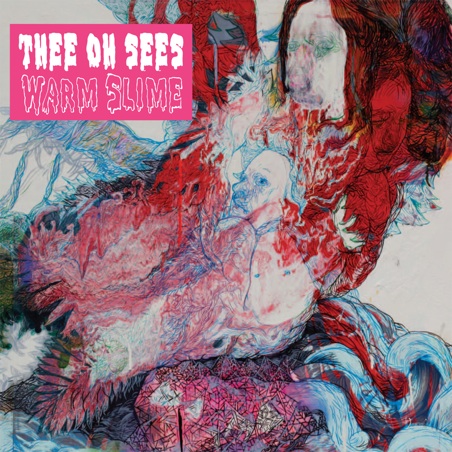 Being as though Thee Oh Sees, my personal favorite live band in the world, tour throughout the world on a very frequent basis, I have no idea how John Dwyer has enough time to write songs at such an alarmingly prolific rate. Does he write them on tour? Do I admire them as a live entity so much that the number of their tour dates is a subconscious, hallucinatory figment of my hyperactive imagination? Did Dwyer personally hire stunt-doubles of the entire band, so that he could be in two places at once (as cute as Brigid Dawson is, I’m definitely not complaining about the possibility of there being more than one of her), killing two birds with one crafty stone? I have no earthly idea, but Thee Oh Sees have a new collection of songs available, and that’s the important thing.

The title track and opener of Warm Slime, Thee Oh Sees’ first full-length release of 2010, is a thirteen-and-a-half-minute barnburner that feels a lot like fighting someone who just won’t stay pinned. Unlike hometown homies Wooden Shjips, who can carry repetition to trance-like, almost absurd lengths, “Warm Slime” is as much an exercise in dynamics as it is an epic garage-rock tune. Muscular drums give way to the soft claps and harmonizing of Dwyer and Dawson, and then gives way to improvised riffs and summoned feedback. The song changes stances to get a better reach. The song gets hit in the stomach and falls down, and then slowly gets back up. The song loses steam, gains it back, loses it again, and crawls its way to a grounded object to help itself back up. After a long, hard fight, it finally gives up, letting out an exasperated sigh as its only last words.

“Warm Slime” is the sound of a great band testing its boundaries and stepping outside of the well-worn template of their genre-of-choice without going down the road of forced experimentation. Seeing what you can get away with is the mark of genius, and “Warm Slime” proves that Thee Oh Sees have it in spades.