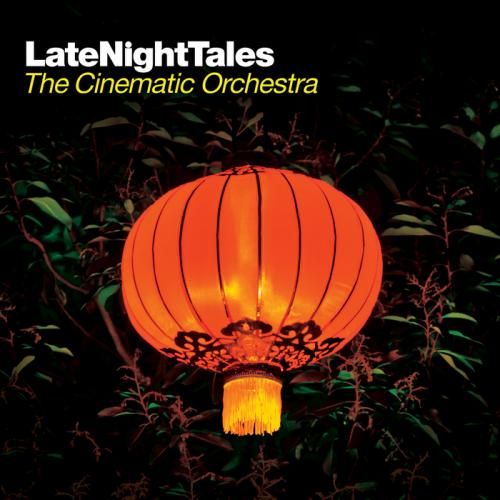 Matt Shea does most of his damage at Movie Critic.Au. You might remember him from such PotW posts as A Bluffer’s Guide to Analog Turntablism and The Hilarious Hijinks of Oingo Boingo.

It may no longer be fashionable to have that Ninja Tune poster pasted to your wall, but there’s no doubt the London-based independent continues to hang on to their strongest artists. One of the biggest on this still-enviable roster is The Cinematic Orchestra, brainchild of composer, programmer and multi-instrumentalist, Jason Swinscoe.

Swinscoe gets around (if you were forced, still half-baked from the night before, to take your little cousin to last year’s Disney doco Crimson Wing, that was The Cinematic Orchestra plying your ear drums), and his latest venture sees him lending his intimidating knowledge of popular music to a Late Night Tales mix. It’s excellent stuff, and makes for a pleasant switch up from the slightly labored Ma Fleur – Cinematic’s LP of a couple of years ago.

But if you were thinking Swinscoe would use a humble mix album as an opportunity to throw his feet up on the desk and smash some vodka tonics, you’d be wrong. A lot of work has gone into massaging this disc together, and when talking about it, Swinscoe proves to be even more thoughtful than you probably imagined him to be.

Taken from an interview originally conducted for Scene Magazine.

This is the first compilation album from The Cinematic Orchestra. Are you happy with the way it turned out?

Yeah, I’m definitely happy with it, but I think I always have an element of dissatisfaction once anything is done – it could always be better. And in terms of compilations – because of the way it’s a collection of other people’s music that has to be licensed – it took a very long time. I started probably a year and a half ago, actually, selecting tracks that were relevant to me at that time and finding two or three pieces of music that were really talking to each other and when mixed together sounded fluid, and then realising that most of that music couldn’t be licensed.

It was frustrating in that way, and you would have to throw all of those ideas out and start again. It’s a tough thing. People who can put compilations together – really good ones – [know] it’s not a breeze; it’s very tiresome and cumbersome, in a way, just because it is other people’s music and you’re trying to achieve the right form. It’s a legality thing: “ I’m feeling this piece of music. That mixes into this so well.” And then you get the cold call saying that you can’t use it – it can be a big downer, that side of it. But it’s good to get something out, for sure.

How many tracks do you think you cycled through before you got to settle on a final mix?

It must have been, like, I don’t know, maybe 200 pieces of music. You can pull from your own personal record collection, favourites and obscure tracks and pull some contemporary things, but to me it’s all about the narrative and the shape and the flow, how the pieces talk to each other, the way one hands off to the next. Because it’s not a house compilation where everything is at 120 or 130 bpm; it’s something where you go from a Flying Lotus tune into a Nick Drake song, and then out of Sébastien Tellier into Burial and then into Burt Bacharach. Those things become difficult to manipulate. They are all from different periods, different spectrums of music, different tempos. They all seem unrelated, so you’re trying to make them relate.

Obviously, they’re all tracks that you enjoy, but what are some of your absolute favourites – tunes you’d point out to a stranger if you caught them picking up the CD?

That’s a good question. It’s like my favourite tunes aren’t actually on the compilation, which is not to put down the compilation at all. It’s just an aspect of compiling and making creative decisions.

In the context of creating a disc like this, do you find it hard to keep up with the music being released these days, with the Internet, online releases and so forth?

Obviously, there is an abundance of music being created and released in various ways, whether it’s authenticated and released through labels or it’s through self-promotion on the Internet. It’s impossible to be able to stay on top of all of it. I think we spend so much time just listening to demos and unreleased music, and I try and allocate time to do that. It’s difficult, but I do hear great things.

It is about finding time, and I don’t think that just because there are more avenues to explore and more individuals doing their creative thing, it means music is getting better. It always has and always will be a constant struggle and fight for good music to shine through, regardless of the mass of opportunity that is obviously there now. There is an abundance now, but that doesn’t mean it’s all good music.

It’s an interesting time. I’ve fathered two children in New York and I’ll sit on the sofa with one or both of them and I’ll be on my iPhone or my iPad, and they just know what’s going on. My eldest daughter, who is three, can take the iPhone, she knows how to scroll through the pages, she knows how to open applications, make calls – the way technology is developing and moving at such a fast pace. My daughter, when she’s a teenager she will know so much more about technology than I did when I went to university, when I was one of those kids who had a phobia of computers – I don’t understand them, I don’t know what to do: “What do you do with it? What’s its use?” But now I rely on it – that’s my interface to create music.

For my daughters, it’s not even a question to them now. The whole way the Internet opened everything up. I read a book a few years ago by Thomas Friedman called ‘The World is Flat’. He is the New York Times writer and brother of – I can’t remember his name, another writer – I can’t remember his name actually. The book was essentially about how you being in Australia and me being in New York and someone else is being in China, how it is possible through technology to reduce the geographical barrier to nothingness.

You read about 20 being the new 30, but it often feels like we’re getting older faster, just because of technology and younger generations’ innate understanding of it.

I hope I’m not getting older faster! That’s something I’m trying to fight – but yeah, I do tend to agree.

Does this sort of album – going through the process of selecting tracks that you love – did it help you reflect upon the music you yourself write?

Yeah, it did, and it helped reaffirm my background. As I said, there were a number of tracks I couldn’t put on the compilation because I couldn’t license them and I wanted the compilation to be, in an ideal sense, the broadest thing, musically, as possible. From African music to classical music then South American music back to American, to British, to European music – it’s like boundaries are a funny invention that are just not there, and shouldn’t be there. Boundaries that are based upon contemporary culture – that’s such a dead end, in a way.

For me, music is all about its creativity and its soul. It’s about expressing the uniqueness that everybody comes to this language to understand and to take that language as something imaginative but tangible that you can hold, play with, and shape, and then put out and translate through your experiences. I know so many people who have gone through music school and are trying to get into contemporary music, and they have the theory but they’re saying, “I can’t find what I want to do.”

And that’s what it’s all about, to find your voice in this world now where everybody has a voice. Like we were talking about before, there’s such an abundance of available signed and unsigned music. It’s like, what’s your voice? What’s your story? What’s different about what your saying? It’s not all about technique and virtuosity; it’s about, ‘What is your story?’ And if your story has something unique about it, that is something that people will become interested in. It translates, it really does.

Every artist who compiles a Late Night Tales album also submits a cover of their choice. Talking About Freedom – what made you choose that as the song to cover?

I selected it partly because of the title, and I guess working with Fontella over two records and getting to know her as a friend, in a way – she’s a wonderful person who has a great family and a fantastic network of support around her. While putting tracks together you’re thinking, “What should be the cover version?” And it came quite clearly early on: “Why not be respectful and do a cover of a Fontella tune?” So, I had a look through her whole repertoire and found the album, Free, which was released in ’72. It had a lot of great tunes on there, and just looking at the spirit and attitude of the piece, Talking About Freedom – the original is a great piece of music and this is really just me doffing my cap to Fontella. She’s given all her life to music. She’s so dedicated, and I have so much respect for that.

You have a habit of getting out and DJing in the live arena. What is it about DJing that you enjoy, particularly when compared to a full band Cinematic gig?

It’s interesting. I came into music on the performance level while I was studying my fine art degree. It was with a band called Crabladder, and when that split, for me it became about finding and defining my voice and my perspective, so I turned to DJing and just loved – much like the compilation – putting two pieces of music together and just being in front of a bunch of people that you are communicating with. “Okay, they’re not dancing now. I have to make them dance!” So you change tunes and do that thing. The live show is a different, where you have a repertoire – with DJing, you can have a selection of tunes, but it all really depends on what kind of show you want to put on. They’re very different disciplines, but I love them both.