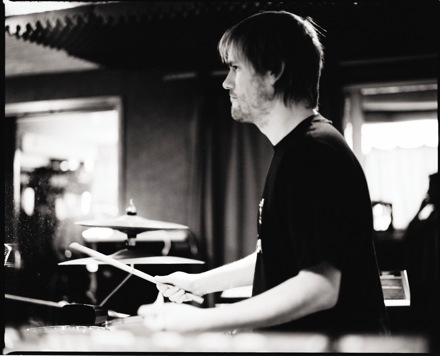 There are cliches that surround krautrock, but I only know a few. My knowledge of Teutonic culture is tragically limited to their ardor of Hasselhoff, Bavarian beverages, and the Neuschwanstein Castle.  Cliches wrapped inside an enigma, wrapped inside a hot dog, and sold at every stop alongside the autobahn. The predominant (and true) trope about Krautrock is that it’s driving music–the ideal soundtrack to toboggan at obscene speeds in efficient vehicles through abandoned roads. Infamously suffocated Los Angeles is not the prototype. The sprawl extends for roughly 100 miles in every direction and errant sausage stands are not an adequate substitute.

So I waited to play BEAK>, the side project of Geoff “Portishead” Barrow until the proper situation struck. A coffin-black streak up the Central Coast, Highway 1 at 1:00 a.m., on a night where the strands of heavy fog looked like ghosts slashing across the car. I see no way in which I can advise you to play it in any other scenario. The volume has to be grotesque, the air full of numinous threats and weird voltage, and the road clear of competition.

Sonically, the ancestral spirits of early Public Image Limited, Neu, and the last Portishead record compete with the occult vocals that tar and feather the heavy rhythms. Barrow is one of the few geniuses extant, but unless Beth Gibbons is offering her necromantic warblings, no one really seems to care. You’d be hard pressed to even know this exists from reading blogs. The last Portishead record was their worst, but it was better than almost anything released in 2008. He somehow turned the Horrors from goth clowns with Eraserhead haircuts into a legitimate force . He’s remixed the Gravediggaz and Pharcyde. But he’s never assiduously courted the press nor been willing to compromise his sound. Had he the desire, it’s unquestionable that he could shatter the notion of a witch-house genre with a flick of Albleton, but he’s never been one for evanescent trends. He likes what he likes and if you don’t like it, you can piss off to use the appropriate Anglo vernacular.

So while Portishead enjoys another long holiday, it’s been a pleasant surprise to see the never-prolific Barrow continue to flesh out his vision for BEAK>. Partnering with political journalist Anika, the band fuse dub, krautrock, and post-punk, to create a sound that hits German suplex-style. No studio wizardry or long gestation. Cut in 12 days with no pretense or over-thinking. The BEAK> project reveals Barrow’s  anachronistic instincts—all done live, with no overdubs or repairs.  Self-released in Britain on his own Invada Records, he turned to Stones Throw for domestic distribution and promotion — a  partnership between two outfits linked by their desire to recombine the best elements of the past to reconcile the fast food foibles of the present. More Hofbrau House than Wienerschnitzel.