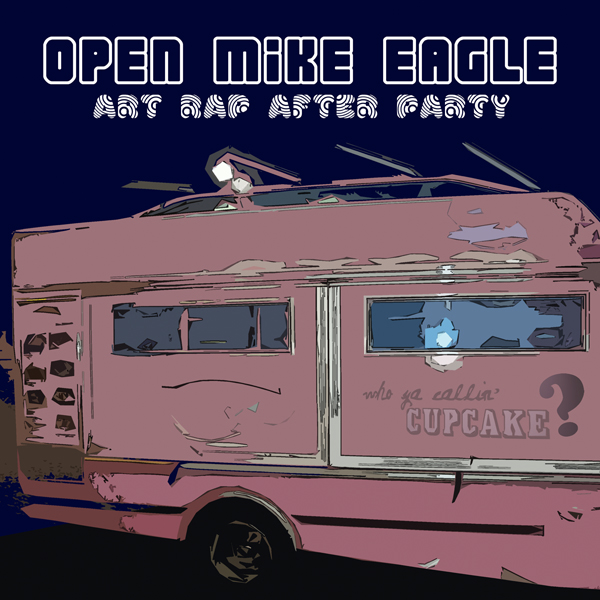 “Everybody’s rapping, everybody’s selling clothes,  everybody’s picture taking, shooting videos…everyday in the city of LA is everybody’s birthday,” goes the first hook on Open Mike Eagle’s Art Rap After Party EP — a record that solidifies the Chicago-born Angeleno based rapper as arguably the finest (and funniest) chronicler of the seedy and mustache-marred LA underworld. The lagniappe to this year’s stellar Unapologetic Art Rap, Mike Eagle II rambles through the dregs of his new home’s coked-out jungle-juiced wastelands, getting wasted to stay sane. He sarcastically compliments a girl on her asymmetrical haircut, telling her that he hopes she stays ahead of the trends. Then he tells her that she dresses like the Macho Man, Randy Savage.

Those with one-dimensional interpretations might wrongly brand this hipster rap, but Mike is no hipster. The guy dresses more GQ than Vice and boasts a surliness that could get him tossed from the Intelligentsia Cafe. Rather than stridently complain, he fulminates against his targets with a caustic wit and an ironic sense that could knock Das Racist out the blog box. While New York’s media darlings get slapped with that most generic tag (“a breath of fresh air,”), Eagle’s tangents are even more searing and cogent. He attacks racists for assuming he’s going to play 2Pac when he just wants to play “Rock the Casbah.”

To be fair, Eagle has yet to give an interview anywhere near as excellent as this, but he does balance his smarts with endearing self-deprecation — more importantly, it never gets self-serious. He’ll mock himself for sending out embarrassing texts, scheming on unfortunate women, and for his own hypocrisy.  Plus, he is good at the singing and the rapping without feeling the need to lie to you about how you are the best he ever had. Mush is allowing Passion of the Weiss to give away the EP for free for the next two weeks. It goes without saying that you should download it. Open Mike Eagle does the dirty work. He goes to Art-Rap after-parties so you don’t have to. After all, it’s much better to eat hummus in solitude.