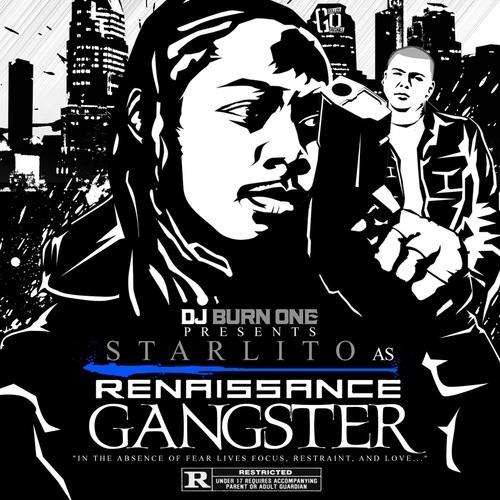 All-Star started his rap career with a largely fruitless run at Cash Money, with a genuine hit that was never capitalized on. The Nashville rapper, rechristened Starlito has kept his buzz going with a ridiculously prolific run of mixtapes, culminating in this record: a concise collaborative album with DJ Burn One, whose instrumentals find the middle ground between Wu and UGK.

After years of commercial pressure, Lito throws out punchline after punchline, his laconic drawl expertly weaving through Burn One’s warm, country-fried production. Lito carries the album without a single feature, largely. “What Was I Thinking” ably showcases Lito’s unconventional flow and writing over the same David Porter sample RZA rocked for “Duel of the Iron Mic”: “Lito Israel/they Palestine/that’s why some of his raps come off like battle rhymes.” He then refers to his red haired weed as Madeline.

“Alright” sums up Renaissance Gangster best; Lito kicks game over Burn’s blend of soft guitar, tinkling keys and cooing vocals. The self-explanatory “Weed Smoker Music” is the smoothest joint on the record, graceful weed raps dancing around winding guitar. But “Tired of Being Tired” is the heart of the album, a lament for dead friends and everyday struggles, Lito croaks out over melancholy keys. No one’s rapping like this guy right now, and Renaissance Gangster encapsulates his skill over the best beats Pimp C never made.