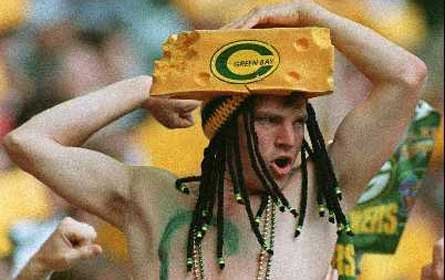 Doc Zeus has a PhD: a player hating degree.

I will be rooting for the Packers on Sunday. Now I have no allegiance to Wisconsin, nor do I have any special affinity for fromage. I don’t care for their colors and I certainly couldn’t care less if a Packers victory would somehow spite Brett Favre for having the audacity of believing he could still play professional football. Nevertheless, I will be flying a Packers flag on Sunday and will be deeply vested in the strangulation of Ben Roethlisberger in the strands of Clay Matthews’ Sebastian Bach hair.

I will do this because I have an allegiance, born out of blood and country – to the city of Cleveland and by proxy their sports teams – that demands Heinz Field must be razed from this Earth and Hines Ward must be sacrificed at the altar of righteousness. The Steelers are the Browns’ blood rivals and I believe that the Gods demand that you root for the damn home team and against their enemies at all cost. This can be a path of suffering and despair but I believe you accept the slings and arrows that fate may wrought your way with a sense of high-minded nobility. There are no rewards or guarantees beyond this and this is something I accept. God reserves a special ring in hell for traitors and there are none worse than those who practice the vile custom of “liberated fandom.”

It is with this truth that I come upon the heresy of Lil Wayne’s “Green & Yellow” and the unholy ideals this song represents. “Green & Yellow,” a freestyle built upon the awe-inspiring insipidness of the erstwhile Pittsburgh anthem, “Black & Yellow,” by Wiz Khalifa – a song much like the 2009 Yankee hymn “Empire State Of Mind” that took upon extra dimensions of banality when it became associated to the Steelers’ demonic 2010 Super Bowl run– is Lil Wayne’s love song to his professed Packers fandom. If the song was recorded by a particularly enthusiastic Green Bay native, it would be seen merely as a goofy ode to one’s local team not unlike the hundreds of equally moronic songs for every professional team that clutter YouTube. However, there is something truly cynical and soulless regarding Wayne’s Packers anthem that transcends it’s lighthearted stupidity. It is representative of all that is evil and cowardly in the world.

Dwayne Michael Carter, Jr. was born and raised in New Orleans, Louisiana, a fact that one becomes intimately familiar with after even a small period of listening to his music. According to the all-knowing deity that is Google, New Orleans is located 1,131 miles from Lambeau Field. Thus, it becomes exceedingly unlikely that Lil Wayne’s declaration of his status as a “cheese head” and the conception of “Green & Yellow” are rooted in any meaningful connection with the region. Instead, we are left to assume that Lil Wayne believes in “liberated fandom” or as defined by “FreeDarko,” the practice of abandoning all meaningful ties to the teams held dearest by one’s family and friends to devote one’s life to Satan and his minions. (Admittedly, I’m roughly paraphrasing.)

It is a heresy of the highest order for it reduces sports fandom to the craven act of choosing a team based on superficial and specious reasons. Fandom needs to be devoted to an ideal that is beyond oneself for it to have any meaning. Otherwise, one is simply rooting for the act of winning – a joyless, selfish act that can bring no satisfaction unless there is someone there to share it with. How does a New Orleans native share joy over a Packers victory if he’s surrounded by a city of Saints fans? Does he hug a Wisconsinite through the soft glow of television as Aaron Rodgers throws a perfect spiral to Greg Jennings in the end zone for the go-ahead touchdown? “Green & Yellow” celebrates this hollow ideal by professing kinship to a people that Wayne has no real connection with beyond a fleeting love of Clay Matthews.

I will be rooting for the Packers on Sunday. It will bring me no joy if they defeat the Steelers beyond the cheap satisfaction that the city of Pittsburgh will be denied their ecstasy. It is not the Browns that will be winning the Super Bowl, but a bunch of dudes I only care about because they are facing a team I loathe. There can be no joy. I believe in the home team and the uncertain perils that the simple act of believing in an ideal can lead to. The big lie of liberated fandom is that it’s tell us that you can derive joy out of the disconnect and the nothingness that surrounds us all. “Green & Yellow” is nihilism distilled into it’s purest essence – the belief that nothing matters beyond the primal need to win. With that being said… Go Packers.