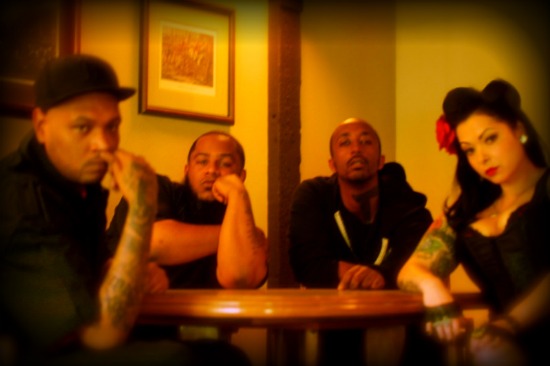 Mood: Currently resisting the urge to scrawl a tedious screed aimed at print publications and critics who rarely write about hip-hop unless it’s to weigh in on the moral quandaries presented by rape-rap and America’s favorite gay not-gay rapper. It’s the music journo equivalent of royal wedding coverage. That’s neither a critique on talent nor said artists’ worth, but rather that every other rap group doing remotely interesting things gets ignored (NO, WIZ KHALIFA IS NOT DOING INTERESTING THINGS). I’m not asking for wall to wall coverage of Shabazz Palaces, Hail Mary Mallon, Mike Eagle, Green Ova Underground, [insert any one of the musically progressive rappers dropping albums in May/June], but it would be nice to read a scintillating think-piece on Aesop Rock, Rob Sonic, and the best late night eating spots in San Francisco (Grub Stake, El Farolito, enlighten me…].

File Denver’s vowel-averse velocirappers, BLKHRTS into the category of those blowing up boxes while delivering a bizarre discomfiting atmosphere. Sach’s February Q&A was thorough, but further listening reveals the group’s scarred but subtle thoughtfulness. Whenever a rapper name-drops a group like Joy Division, it drives easily impressed critics to lavish praise on their “stunning eclectism.” The BLKHRTS kick an abrasive racket, but their references run deeper than name-drops — hence, a twisted sample from Warsaw (Joy Division before they re-branded.). Or lifting loops from Eraserhead. Or writing the best one-line description I’ve read all year that verged dangerously close to being the worst: M.O.P. meets Morrissey.

Their latest track “SX, DRGS, VLNC, MN, DTH” touches on the immutable aspects of existence — as they point out, “besides that, what else is left?” Rather than bemoaning their lack of national press coverage, they violently channel their aggression in the booth. This is no salvo against haters or critics or their own shortcomings, but rather the migraine bylaws that govern us all. Merging the Mash Out Posse’s lead pipe rap with a disjointed post-Def Jux aesthetic, their voices sound like they’ve been slit with oxes. The beat moves with the clattering velocity of a subway car going off the rails and murdering dozens. Admittedly, this lacks mass appeal. It’s brutal and heavy and unstintingly dark. The qualities that suddenly everyone adores.

For posterity: the new video from Yonnas’ other group, The Pirate Signal: