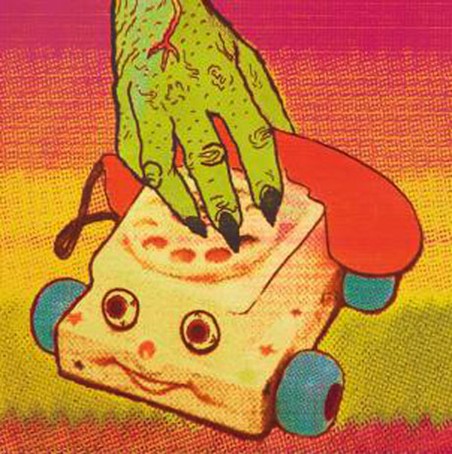 A small list of things that I have either done or have had done to me during the five times I’ve caught a live set from Thee Oh Sees:

1. Stopped a renegade monitor from flying into Mike Shoun’s drum kit.
2. Saved two girls from being trampled in the front row, both during the same performance.
3. Got forcefully pushed into a girl wearing a coonskin cap.
4. Wiped John Dwyer’s hair sweat from my glasses.
5. Got kicked in the face by a renegade crowd-surfer.
6. Drunkenly kissed Brigid Dawson’s hand from the front row between songs.

As I’ve mentioned on this very blog at least three times, I genuinely feel as though Thee Oh Sees are the greatest live band in the world. The San Franciscan quartet is simultaneously freewheeling, visceral, playful, and imminently dangerous in a live setting, building upon the chaos that comes with being a widely beloved garage-rock group. Most of their records (a tally that includes but is not limited to four full-length albums in the past three years– and those are only ones released under the official name “Thee Oh Sees“) have mostly served as documents of their giddy annihilation of rock club stages, the souvenir you can take home and put on when you want to relive the damage. That’s not to say that John Dwyer isn’t a pretty exceptional songwriter; it’s more that the songwriting on Oh Sees records usually takes a backseat to how much fun those songs are to hear live.

The reputation for Thee Oh Sees has slowly grown until it shot through the roof, with high points like 2009’s Help and last year’s Warm Slime. As they often do when a band reaches a career breakthrough, the insider rumor mill was teeming with chatter about a John Dwyer solo record. Nobody was exactly sure what was going to happen with these recordings, if they were going to be released under Dwyer’s own name, or fleshed out with the entire band. Well, with the help of the always dependable label In the Red– and a little confusion over the release date– Castlemania, billed as Thee Oh Sees but credited almost entirely to Dwyer, has found its way into both internet leak sites and independent record stores.

Opening track and lead single “I Need Seed” exists as a textbook example of what to expect from the fifth Oh Sees record since 2008: bouncy acoustic guitar strums, jaunty handclaps, trippy flute work, and infectious call-and-response vocals. What makes the song jarring, unsettling, and ultimately interesting is how those aforementioned vocals and lyrics are combined to make the song sound like some sort of a theme song to an utterly warped children’s television program. From the point of view of a patch of soil, Dwyer sings of vomiting grass and trees and the life that springs from them in a voice that literally sounds like a pile of dirt with googly eyes controlled by puppet strings. It’s one of those songs that has no middle ground (no pun intended); you either love it or you loathe it. There aren’t many people that could listen to a song like “I Need Seed” and say, “I guess I kind of like it, but eh.”

Castlemania, by the numbers:

* 10: Instruments played by John Dwyer.
* 6: Number of songs on Castlemania that prominently features a flute.
* 4: Credited musicians not named John Dwyer.
* 2: Credited musicians who only contribute vocals to the record.
* 9: References to nature.
* 11: References to either death, blood, or flesh wounds.
* 44: Number of times Dwyer sings the word “yeah” in “Corprophangist (a Bath Perhaps)”.

Due to Dwyer’s affinity for experimenting with a number of instruments on Castlemania (including woodwinds, trumpet, and various synth sounds), the record is easily the most sonically ambitious in the Oh Sees canon. The band has flirted with trippy psychedelia in the past, but, as most things related to those albums, was secondary to primal energy. Here, with the freedom that is afforded with being alone, Dwyer allows himself to spread his wings in terms of kaleidoscopic, colorful instrumentation, as evidenced in hallucinogenic drug advertisements “Stinking Cloud,” “Pleasure Blimps,” and stunningly melancholic instrumental interlude “The Horse Was Lost”.

The thing that is often overlooked about Thee Oh Sees is that it was originally intended to be John Dwyer’ escape from the all-out assault of the seventy-five bands he was already in (most notably: Pink and Brown, The Hospitals, Coachwhips).  Thee Oh Sees initially served as the “weird bedroom project” for the 37-year-old garage-punk lifer, the place where he could experiment with recording and songwriting instead of hocking globs of spit onto stage lights eight feet above him. It wasn’t until further down the line where they turned into the four-piece rock outfit that would escort him to a success that, albeit still pretty modest, has risen scores beyond that of his previous bands. But with that said, most of the songs on Castlemania sound like they could fit on, say, 2009’s Dog Poison, and mostly sound like the songs Dwyer has been writing for his band. Only a lot weirder.

And Dwyer doesn’t limit that to his own songs. Three covers bookend the record, most notably the gorgeous rendition of West Coast Pop Art Experimental Band’s “I Won’t Hurt You,” which features muffled drum kicks, guitars blurry and distorted enough to make Liz Harris of Grouper raise her eyebrows, and a spate of San Francisco garage all-stars (Dwyer, Dawson, Ty Segall, and Heidi Alexander of The Sandwitches) so unified in vocal beauty that it’s nearly impossible to tell which one of them is singing what. Toning down the original a few notches, “I Won’t Hurt You” emerges as the band’s “In the Cold, Cold Night” moment, an sparse instance of radiant quiet from a band most known for their visceral approach to an arcane musical era. You get the feeling that a song like this would generate the same sort of eruption as when Meg White stepped behind her drum kit to sing the Elephant standout at White Stripes concerts.

A list of sentence fragments that open Castlemania‘s liner notes:

1. This here is the last record worked on
2. At 608 C Haight Street in San Francisco
3. (Very near and dear to my heart
4. And heavy in my memories)
5. Before control was assumed by rich assholes.
6. Enjoy.

There’s a a fitting irony hidden in the above message. With all of the underground vultures descending upon the San Francisco music scene, Castlemania–with all of its confounding moments, with all of its unabashed (perhaps even confrontational) weirdness, it seems Dwyer is protecting the scene he is a hero of from indie bandwagoneers. There’s this feeling that he has not only created something that sounds like it was a lot of fun to make, but also that he’s filtering things out, separating the band’s die-hard fan base from fair-weather scenesters only out to hop on underground music’s New Big Trend. As I’ve just stated about the single, there’s precious little neutral ground when it comes to Castlemania; either you’re in or you’re out.

As the cliché reads, you should never judge a book by its cover, but take a peek at the album’s cover art. On it, the grotesque hand of a green monster clutches the receiver of the iconic Fisher Price phone. There’s an unsettling balance on Castlemania between the gruesome and the childlike, which sums up the record just as well as any of the songs encased within. For a band so well-reputed for their live performances, Castlemania stands completely on its own as a recorded work, proving that Dwyer’s been hiding quite a few tricks up his sleeve while unpacking his gear.