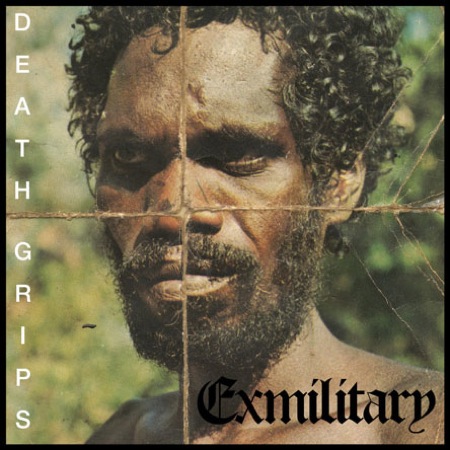 Whether or not you enjoy Death Grips depends on what you want out of your music. If you’re searching to replicate the disorientation of a drill sergeant screaming seig heils at you while you attempt to asphyxiate yourself with a plastic bag, this will be your favorite rap group of all-time. If not, they exist as more ammunition for why you never wanted to be all that you could be.

I’m not sure what it is about Sacramento. That’s where these guys call home — the Valley cowtropolis famed for Phil Jackson ire, a place that has thus far contributed three rappers in 30 years to the national rap discussion: Death Grips, Mean Doe Green, and Brother Lynch Hung, a rapper so horrorcore that he makes Eli Roth look like Henry. And there is nothing about these guys that remotely can be called sleep. At the show last night, people acquired tinnitus, emerged from mosh pits with their shirts soaked through, and started throwing bottles from the Low End Theory balcony. Even a flaccid fistfight broke out between two white kids so weak that looked like they were trying to throw slap bracelets on one another. Death Grips does that to you: they make you want to usher in a palace coup with the government helmed by a crew of guys clutching Kalashnikov’s and smoking Cohibas.

I should probably clarify that they don’t really do that to me. Last night, while they turned the Low End Theory into an all-ages hardcore show, I calmly sipped my whiskey and smoked my weed and watched teenaged white kids pogo up and down with the fervor of speed freaks. If Odd Future is the No Age of demented new-era punk-rap: arty DIY skate-punks with impeccable and innate branding ability, Death Grips are its version of Fucked Up. Older sweat hog warlocks who entertain no pretenses of melody or iconography. They’re more interested in replicating the sensation of standing in the middle of a 200 MPH win tunnel.

You may not have heard of Death Grips if you frequent the rap circles who are patiently waiting for J Cole to receive the rest of the patches on his letterman’s jacket. But within the same realm that helped tip Odd Future (read: punk-inclined white kids, a demographic who haven’t much listened to hip-hop since Antipop fell off), they’re already blowing up. At least, that was the takeaway from the Low End audience last night, filled with a bunch of people who think beat music is an Allen Ginsberg thing — your metal friend with the stringy Gorgon hair who was moshing shirtless, while MC Ride (really?) convulsed and shook and screamed. There was a lot of screaming. A lot of screaming.

Meanwhile, Zack Hill, a guy best known for his work in Hella, a band whose Wikipedia describes as a mix of math rock, experimental rock, and noise rock (all three kinds…), drums like he’s been getting that good German methamphetamine: frenetic and grooveless. Math rock rap. A pulverizing blood bath of percussion.  They have all the subtlety of a Japanese snuff film or Faces of Death. Song titles include “Guillotine,” “Blood Creepin,” and “Cutthroat.” Think Dalek with even less interest in songcraft. Or a far more abrasive Killarmy, with a vocalist screaming militaristic gibberish like the RZA smoking digi and wearing his Bob Digital suit.

Between their indie-rock pedigree and the avant-garde intent, they’ve already attracted their fair share in hype in just six months extant. Even before I received the first e-mail from their publicists touting “mysterious and intense avant-garde hip-hop,” they had taken a trip through the Altered Zones. While British website The Quietus asked if this was the rap album of the year (it’s not), complete with bogus David Foster Wallace lede, and the sort of fluttery hyperbole that could only come from someone who listens to three rap albums a year and still calls Talib Kweli “an underground rapper” in print. Even Mike Shinoda of Linkin Park hailed them as “ODB listening to Fugazi & cutting up Portishead’s studio with a chainsaw.” I wish. But that makes sense. Death Grips are the sort of group that the guy in Linkin Park would think was the future. Even if their scraped eardrum style sounds more like what you would have expected around the fin de siecle.

Who knows? Maybe they are the future.  XL is reportedly circling them, no doubt looking for an OF replacement now that those dudes got wise and set up their own imprint. Maybe they can go on tour with Vampire Weekend and scare the fuck out of a bunch of kids who only wanted to wear their cardigans and boat shoes in tranquility. After all, this punk rock rap shit will probably sell better than actual rap shit that doesn’t have candy rave synths or Jay-Z or Wayne’s imprimatur. Because you know that these kids will buy the merchandise and the vinyl and get the matching Death Grips tattoo. Nor can I hate on that. If the alternative is Drake mewling about the monotony of being rich and famous or talented rappers forced to subvert their talents into some techno-rap torture chamber, I’ll go with the guys who approximate the experience of being in an actual torture chamber every time.

I grew up on EPMD and Reggie Noble, so whenever in doubt, I will always err on the side of the hardcore — even if Death Grips make me want to paraphrase Hansel on Sting: I don’t listen to their music much,but the fact that they’re doing it, I respect that. So hat’s off even if the music is too atonal for my tastes. Besides, there’s something worthwhile about a rap group uninterested in whether or not you tip your cap or not — they’re too busy trying to decapitate heads.