“Elevators” stays several hundred feet and rising in my mind fifteen summers later, on a sun-scrambled Labor Day weekend. I think it may have been exactly today when I snatched the cassette single at an obviously shuttered Sam Goody in Orange County. My parents had dragged my sister and I on some haute-haunted two-day trek to the south to get pulverized by freon inside Rhode Island-sized malls. I escaped with about four bucks to plunk down for the sing-a-long that had hypnotized me all summer whenever it appeared on Rap City.

To me, “Elevators” was about escape and alienation, two things I understand well as a teenager stranded somewhere between the jocks and awkward fitted-capped white dudes who described things as “ill” without irony. Its video tractor-beamed me, me and you, everyone in, comic book kids and UFO search parties in the jungles. Andre sneaking into class and graduating, only 21 years old at the time of the shoot, turbaned and tuned in, searching for wide-screen realities in contrast to everyone else on The Box. This is my favorite album and I have a lot more to say but not enough time to say it. If you don’t move your feet, then I don’t eat. Etc.

Below the jump, via Egotrip, a video of Andre and Antwan in Atliens promo mode. Plus, MP3’s including the recent Weezy and Curren$y re-working. For better or worse, we’ve come a long way like them slim ass cigarettes. 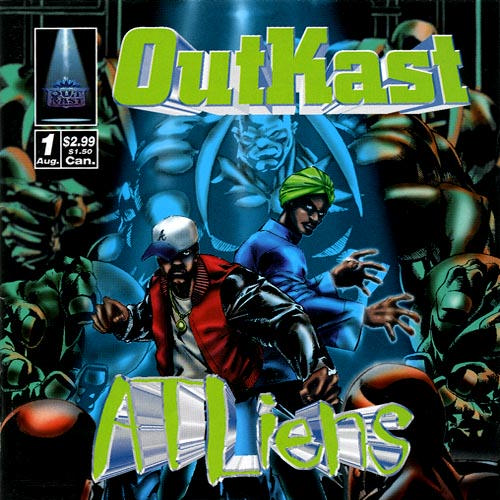