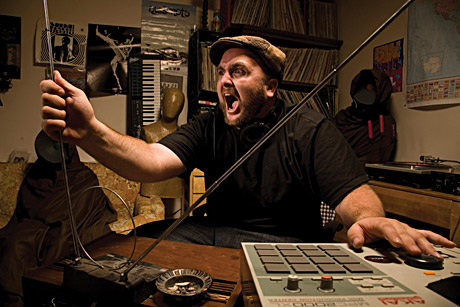 Exile deserves every ounce of renown he receives. The LA native is an MPC maestro, a producer, a rapper, and now a Nas collaborator. But first he was Aleksander Manfredi, who  started with a pre-fame Aloe Blacc in rap duo Emanon, recording several singles, cassettes and the 2005 album The Waiting Room. Production for Mobb Deep, Kardinal Offishall and Jurassic 5 followed, culminating in Exile’s ‘06 solo debut Dirty Science with features from Ghostface Killah and Slum Village.

Tell me about your first experience with rap music.

There were roller skating rinks back in the day when I was little, I think the schools would take us there. They would always be playing freestyle [electronic dance music from the early 80s], electro, like Debbie Deb, and there was always some break dancers around. Just skating around and hearing this electronic music with robot voices, 808s booming. I was definitely intrigued but didn’t understand it. I was into Michael Jackson, stuff like that. I remember hearing cars driving by booming and thinking, “What is that boom?” Finally I figured it out, listening to freestyle type music and LL Cool J. I got some decent speakers and I would listen to music with the treble turned down all the way so I could just hear the boom.

One Christmas I told my cousin, he was into funk, what type of music I was into. He got me LL Cool J’s [1985 debut] Radio and a Sex Pistols tape. That was my first hip-hop tape and kinda sparked it for me.

Did your experience with those DJs influence your live show?
There are certain synth sounds or 808s I can know I can use to get the crowd live. Or I might speed things up to a freestyle tempo or a slow, bounce tempo.

Do you recall the first beat you made?
After I heard rap music, I would think, “How is this made?” I would beatbox, I had a turntable with a tape cassette on the bottom, the radio and the turntable up top. I would hold the “Tape” and “Phono” button to create the Transform [turntable sound effect]. Eventually I got two tape decks and the one turntable and I figured out how to record on one tape. It started with a Tom Tom Club sample, I would play two bars, like [imitates the bass line of “Genius of Love”]. Then rewind it and play it for 3 minutes so there’d be blank spaces every other two bars. I took that tape after I recorded it, and put it in the other tape deck so it’d play back two bars of music, two bars of silence for three minutes. Then the [new] tape would be recording and I’d fill in the gaps with the turntable.

So I had the loop on one tape and could record whatever on the other. I could pretty much do that forever, I had infinite tracks. But it would create a lot of hiss, it’d be quieter each time.

So your history with tapes predates the new album.
When I got a four-track, me and Aloe Blacc would record a lot of music together, we had a group called Emanon. A fan pressed it up and we got play on a big-time radio station off a four-track! Back then, I would sell four-track music all the time. For about five years straight we were making music like that. I’m going back to my roots to make this four-track music…there’s a mystique to it, the hiss, the process and the way it makes you sound. I wanted to record this rap record but I was recording with other artists at other studios at the time, and didn’t have the equipment at home. I wanted it to be a little intimate so I thought, “let me do a whole project like this called 4TRK Mind.

It’s an interesting choice, since West Coast underground rap has this rich subculture of tapes with people like Murs and the Living Legends crew.

Man, there’s a whole generation missing out on this circulation of tapes. How’d you dub a tape for other people. Music wasn’t as accessible back then, pre-internet, so if you had something [exclusive], it gave you a sense of accomplishment for even having it. And to find out someone else had it and they’d give you a dub…one tape circulating around a bunch of people, it would just get hissier and hissier. It added a mystique to that artist because it’s so hard to get.

To get that dub finally, it was a lot more satisfying than just looking it up and downloading it. Back then, I think hip-hop [listeners] were a lot more selfish. They wouldn’t give a dub to just anybody, you had to really trust that person, that they were really into that music and would respect it. That’s definitely lost, everything is accessible.

Why did you decide to record the new album as a solo rap album?

I was always rapping while I was making beats. Everything didn’t come out but I had all these four-tracks of me rapping. I rapped on the Emanon album, on a song called “Six Million Ways”, I rapped on [“I Am…”] on the Blu & Exile album, I rapped on [“Bo Jackson”] on Fashawn’s Boy Meets World. I kept on recording my lyrics and then I decided to put it out, see what happens.

Did you find yourself approaching it differently than the collaborative work you do with Blu or Fashawn?

It’s different because it’s more personal to me, just because of the words and the stories I’m telling. And I’m bouncing ideas off myself to decide what to keep. Versus a collaborative effort, where there’s more than one mind to polish it off to a finished product. It’s different than just making beats because if I’m feeling down about something and having all these thoughts, I can turn that into a song. It’s a real release, turning pain into a song that communicates who I am.

Take me through the process of putting a song together.

I’ll listen to records until I find something that catches my ear and make it. I’ll be making records with the thought of doing it for the Fashawn project or maybe trying to shop it to Snoop Dogg, Mobb Deep, whoever. A lot of times, if I make a really banging beat, I want to get it to the right super-emcee. I’m always freestyling when I make beats to see if the structure’s correct for an emcee. Sometimes I say, “fuck this, I’m keeping this beat”. Typically the best energy for making a song would come from just making a beat and going straight into the rapping after, boomeranging off the energy from making a dope beat into making a dope song.

I guess the 50 Cent & Mobb Deep joint, “Pearly Gates”. I really like that joint. And there’s this song I did for Snoop Dogg, nobody’s heard yet called “Lullaby”. I did release it on a 12’ as an instrumental a while ago.

Is that ever coming out on an album?

I don’t know if you’ll hear that, but you’ll definitely hear me and Snoop. I’ve been working with Snoop and Wiz Khalifa, got them on a couple tracks.

What else are you working on? I heard you and Blu had an album in the can.

Yeah, we have another album. I still want to do another 3 new songs for it. So we got a new Blu & Exile record on the way, a new Emanon album, Aloe’s rapping again. I’m really excited about it, it’s definitely a little darker, a little more mature than the last record. I’ve been working with No I.D. a lot, we’re co-producing stuff for different artists. We worked on something for Snoop and Wiz, we have some stuff with believe it or not, Talib Kweli and Bow Wow. It’s actually pretty cool…[Bow Wow] being like, “I was a little kid rapper but I’m still rapping and I’ve been paying my dues forever, so gimme my respect”. He’s definitely stepped up his bars as well.