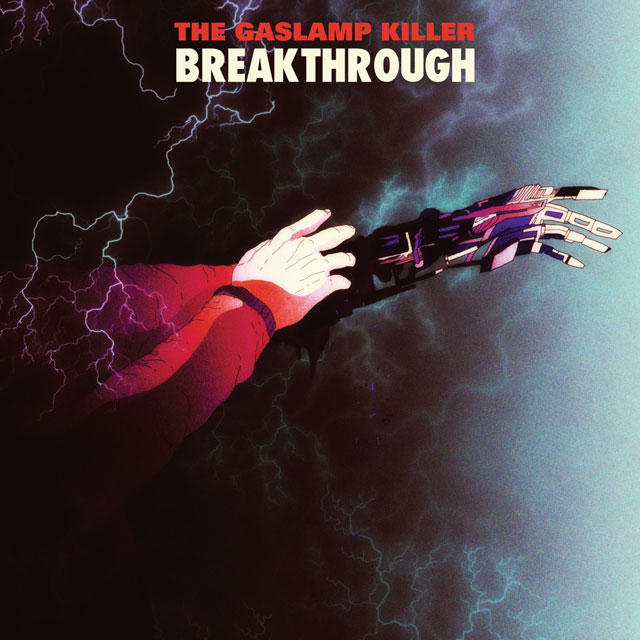 Following a string of nearly incoherent gibberish, the first comprehensible words on The Gaslamp Killer’s Breakthrough are: “You understand what I’m trying to say?” That sums up his Brainfeeder LP debut pretty well. The work of an obviously febrile brain, the Los Angeles by way of San Diego beat-head has journeyed down the rabbit hole to find equal parts chaos, and coherence, surreal dreams and down-to-earth grit. The result is one of the trippiest rides you’ve ever heard.

By his own admission, William Benjamin Bensussen isn’t here to make club or party music.  Instead, he focuses on “head music” or “third-eye music,” “music for your brain, not for your body.” The most obvious touchstones are his love of Turkish music (his families place of origin), cinematic strings and heavy percussion — but you’re better off trying to count crystals on your buds for as many musical detours as he takes here. Breakthrough is full of sounds you probably have never heard outside of a GLK mix. To further complicate the equation, there are equal parts psych-rock, George Martin-esque cinematic strings, glitch, 8-bit, straight up beats and late night-grooves, as well as what I’m sure are dozens of other sounds I won’t discover in the next dozen or so listens. You can approach the album as a perfect summation of  GLK’s contributions to the L.A. beat scene, starting with with his original, eponymous mix, through his Low End Theory podcasts, to his EPs (Death Gate and My Troubled Mind.)

Examine the track list.  The guest list reads like a “who’s who” of GLK confederates, with appearances from Mophono, Daedalus, Adrian Younge (the faithful psychedelic attorney), Miguel Atwood-Ferguson, SAMIYAM, Dimlite, Shigeto and Gonjasufi. The music contains both live and sampled clips, all combined into a concoction that you’d expect from the guy whose got his name by killing party vibes with his intense and intelligent cuts in San Diego’s bro-heavy Gaslight District. (Personally,I’ve always thought his nom de guerre comes from the fact that he’s clearly Jack the Ripper reborn from the 1880s, taking dirty, grimy beats and sounds, carving them up to his own satisfaction, and then displaying his genius for the world to either accept and appreciate or be greatly confused and horrified by the results. However, I also smoke a shit ton of weed.)

In addition to the aforementioned outside contributions, GLK has included conversational snippets from both his parents (see “Father” and “Mother”). That doesn’t mean that he doesn’t show off a lighter side, too, as evidenced by the grammatical lesson of “Fuck.” From there, while the ride is all over the board, but the vision is clearly in mind — the groove is found and then followed.

With their Gonjasufi yawps, “Veins”and “Apparitions” are shambolic shamanistic ramblings. “Holy Mt Washington”and “Keep It Simple Stupid” are lessons in how to properly employ the snare and other non-bass-heavy percussion into one’s beats WELL — a thought echoed and appreciated by Mophono on his slot on “Critic.” “Dead Vets” is an acid-drenched, Lizard King stroll down the beach, and“Nissim” firmly places in the listener in a bizarre, Persian bazaar at mid-day with too much hashish in your lungs. AND THAT’S THE “EASY” STUFF TO DIGEST HERE.

By the time you arrive at album finale, “In the Dark…,” you get a glimpse at the directions that The Gaslamp Killer might head next. The album closes with a moment of silence before jumping back into an eerie horn piece punctuated by a freaky sounding kid quoting “The Hollow Men,” sing-speaking the line, “This is the way the world ends.” It’s as if the man can’t help himself, even with his opus complete, he has more to say. So the most logical option is to listen again and again.