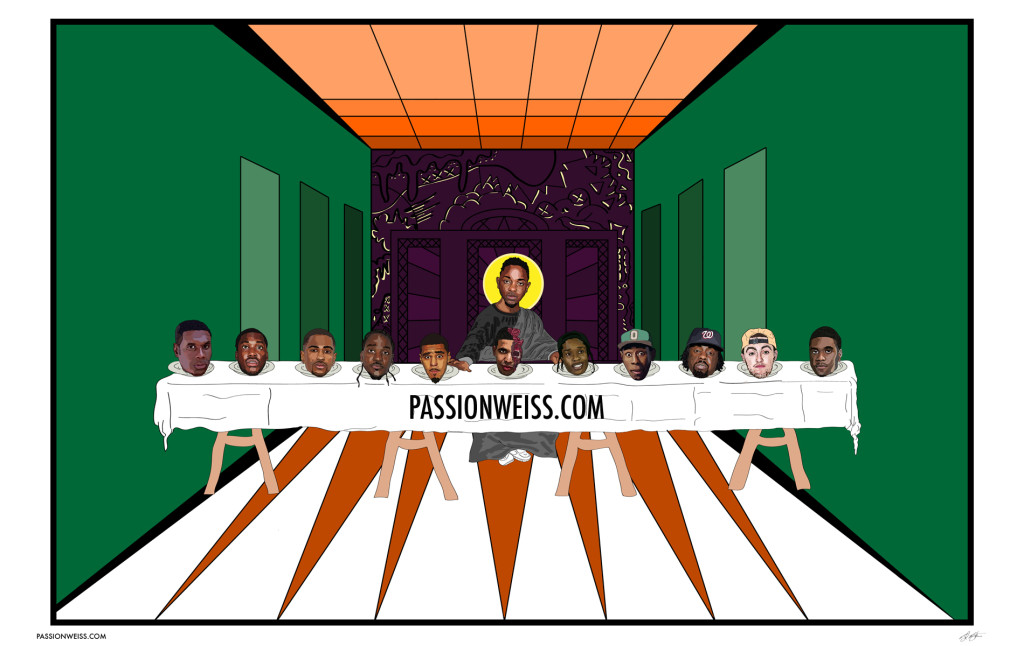 Smarm is everywhere. Take Big Sean on “Control (HOF),” smarming it up like a pro. And if you go back and pay attention to Big Sean’s lyrics, he is a professional smarmer.

That’s first class hedging, people: ‘I’m tired of people claiming to be the greatest rapper! So I’m ONE of them. And the reason I’m one of them is not because I’m comparing myself to anyone else. I’m too good for all that. And in the midst of this, I’m going to clown on anyone whose career was helped by an artist of a higher caliber. Oh this G.O.O.D. music sweatshirt? Yeah, I’m on that label, why do you ask?’

It’s a portion of verse that’s both sad and sanctimonious; I feel as if there’s been some sympathy mounting for Sean around these parts, and I gesture towards these bars as proof that he is not deserving of it.

So let people characterize the subsequent verse from Kendrick as spontaneous, as a blast of hellfire from a pint-sized rapper who couldn’t contain himself longer. As a stone testament from the current rap God (no Marshall.) But I prefer to see it as an evisceration, of a sentiment that Sean was foolish enough to let slip. We live in a world where Big Sean doesn’t lose all respect by refusing to claim a title. Kendrick took us back to a time when rap was more competitive. There’s no question that the verse was filled with exciting, head-spinning, delirious rapping. But what made it stand out from other noteworthy Kendrick verses was the fact that he claimed the crown on both coasts and the fact that he name-dropped. That’s what had Hot 97 and barbershops on both coasts salivating. That’s what blew through the speakers: the declaration of dominance that dug up something rap, as strong as it is right now, has been missing. If the mantra “no new friends” is the epitome of the genre’s reigning passive-aggressiveness, then “I’m gon’ get it even if you’re in the way” is a necessary clock-turn back to direct confrontation.

With his verse on “Control,” Kendrick helps to make the conversation a little less muddy, by awakening something primal in many hip-hop fans. It’s not just the best verse of the year. It’s an organizing principle. It’s a helpful rubric through which to discuss and consume rap. We don’t have a right to even rank songs and albums unless we have a definitive template of what a certain genre should be. For many of us, Kendrick’s verse is that template.

There are multiple ways in which the verse helps us to understand “good” hip-hop as it exists today. One of the most simple is the way in which he gives us a canon, and a group of contemporaries. His Mount Rushmore has representatives from East, West, Midwest and South. Argue with it if you will; point is, you have a group of rappers around which to argue. I wouldn’t be surprised if in five or ten years, you see pieces checking how each rapper responded to the name-drop. Fans of Kendrick with half an open mind may have checked for Mac Miller and said, “hmm, Kendrick was right about this one.” Checked for Wale and been like “hmm, never listening to what Kendrick has to say ever again.” Point is, not one of those guys can now be dismissed as an afterthought. Kendrick dragged them with him into hip-hop’s center.

The verse also functions as a lesson on the new fundamentals: in order to compete, this is how you’re going to have to rap. Take a look at a section where Kendrick proclaims himself king twice over:

I’m Makaveli’s offspring, I’m the King of New York,
King of the Coast,
One hand, I juggle them both
The Juggernauts all in your jugular you take me for jokes
Live in the basement, church pews and funeral faces

This is vivid writing, the likes of which Kendrick’s competitors haven’t been able to touch. He’s not just the king: he’s juggling both coasts. You can see it. You can see the screwfaces in the basement, watching the show, diminutive Kendrick launching himself at your throat. These are big-screen images; remember, Good Kid was billed as a short film. It’s not just the ferocity of the words here, but the dynamism of the images they bring alive in your mind. Other rappers need to ditch facile hashtags and the catchphrase circle jerk if they want to enter the ring. Nothing in these five lines or in the rest of the verse is static or just relies on the dumb fun of repetition.

The last time a rapper claimed the crown with any kind of credence was Lil Wayne, over a Jay-Z beat back in 2006. It’s never just a matter of saying you’re the best. It’s about putting in enough work to make the claim valid and THEN making the claim. And the school of “don’t worry if I write rhymes, I write checks,” the school of the hit maker, has just never worked for many rap fans. We don’t want labels or clear-channel to be in charge. We’d like the freedom to evaluate rap ourselves, with a set of standards shared by those whom we argue with. Otherwise, what’s the point of even discussing? We’ll just look at the sales charts, or at the billboard lists, or, even worse, everyone can just be right about everything they think.

The vote for Kendrick isn’t unanimous. We’ve got Danny Brown, after all, whose absence from the list is a strong argument against Kendrickian orthodoxy. Those of us who have been convinced by Odd Future might argue for Tyler, or for Earl. But Kendrick’s verse gives us a focal point and a set of standards. We may not know what sides were taking but thanks to Kendrick, we know what the argument is.