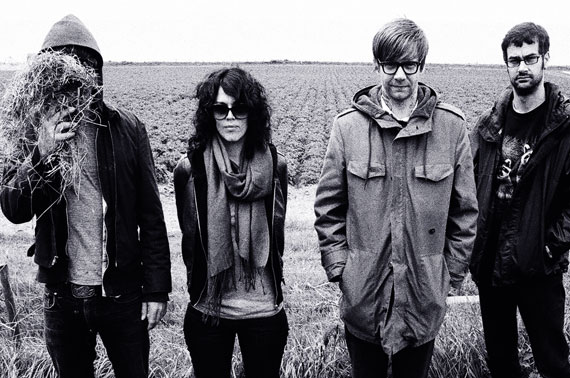 Douglas Martin is pouring out a little Anchor Steam.

One summer a few years ago, I went to a show in Portland — a girl I knew really liked the Dodos and wanted me to go with her. There was a man at center stage with a guitar. He was clawing and scratching away at his guitar as the other three members of the band watched him closely. They watched with very attentive eyes and their movements were either locked in a groove (when they knew what song they were playing) or entirely tentative (the many moments before they knew what song was playing). It was entirely obvious the rest of the band had no idea what he was doing next; what song, what riff, hell, even what tempo their fearless leader would solider off into. But once they knew what song they were shredding into, the band fired on all cylinders, playing some of the most squealing, squalling, art-damaged garage-punk/pop/rock I had ever heard in my life.

At some point — maybe the beginning, maybe toward the middle — the frontman introduced the band. “We’re Thee Oh Sees from San Francisco, and we are motherfucking delighted to be here.”

It wasn’t just indie band bullshit lip-service, either. Thee Oh Sees played like they actually were motherfucking delighted to be there. Even with Brigid Dawson, Petey Dammit, and Mike Shoun staying on their heels to keep with John Dwyer, they blasted through their songs like they were having the time of their lives. Dwyer was swilling beers like purified water, Petey Dammit was playing bass lines on a six-string guitar, Mike Shoun thwacked his drums like a cross between a seasoned veteran and a kid trying their mightiest to piss off their parents. Brigid Dawson radiated a very specific sort of effortless cool while playing the keyboards and singing backup vocals. And as their music floated through the speakers, I knew this music was for me. It had guitars and drums, was weird and noisy, but was still stringently dedicated to pop melody. They were an arty band removed from the pomp and pretentiousness of most arty bands.

During the Dodos’ set, Meric Long said, “And give it up for Thee Oh Sees, the best band in the world.” It’s almost like he echoed my own sentiments.

I’ve been to a number of Oh Sees shows in my lifetime, probably more times than I can count. In fact, before recalling correctly, I thought the first Oh Sees show I went to was when they opened for Jay Reatard in Seattle in 2009. As all of their shows, Dwyer was a whirling dervish, spitting into the rafters and bouncing while playing guitar maniacally, as if he were trying to summon the devil himself. There were vintage amps stacked on top of each other, Dwyer’s initials on the back of his guitar, marked by the kind of stickers you buy from Home Depot to put your family’s surname on a mailbox. They played with jovial intensity which heightened their status as beloved garage scamps, and the big takeaway from watching a band like Thee Oh Sees live is that you leave wanting to be a member of that band, because they’re always having so much fun.

One night in December 2010, a friend and I went to a free Oh Sees show, sponsored by the rum company Sailor Jerry (which actually sponsors quite a few garage-rock shows). Well, because this was basically a promotional event for a hard liquor brand, they were doing outrageous things like selling shots for $3 or some similarly (read: ridiculously) low price.

By the time the bands came on, the small venue was packed with really drunk and really overzealous 22-year-old kids, while my friend and I — both 26 at the time — stood front row so that we could feel the energy coursing from the band directly to us. I wouldn’t say that was a bad idea, but we did end up spending the night trying to prevent from being pushed into the corner of the stage, picking up kids who fell down moshing, bobbing our heads along with sweat from at least ten different people all over our clothes, and trying to keep other people from overturning Mike Shoun’s kick drum. While this chaos was going on (Dwyer repeatedly cautioned the audience not to hurt each other), I looked to the back of the room to see if the bedlam had a stopping point in the crowd. Before I could turn my head back to the stage, I felt a sneaker — along with the foot attached to it — smack me right in the side of the face.

By the end of the event, some unlucky soul was crawling around on the rum-streaked floor trying to find their shoes like he was trying to find a book after his house was tossed by a tornado. It was one of most exhausting tests of endurance I’ve ever had, but it also came with a killer soundtrack.

Although I’ve gone on record many, many, times to say Thee Oh Sees are the greatest live band in the world, discrediting their recorded output would be a glaring flaw on my part. John Dwyer is not only a galvanizing force, not only does his cup runneth over with charisma, but he’s also one of the most intriguing songwriters in rock ‘n roll today.

Most people who live their lives outside of basement shows, and even some of those that do, always typecast garage-rock lyricism as “dumb,” or “smart people trying to dumb things down,” but this is not the case with Dwyer. His lyrics are poetic, often stream-of-consciousness treatises on death, decay, and the horizon being obfuscated by view. On the same token, there are a great deal of “ba ba bas” that pepper many a chorus of an Oh Sees song, and it remains to be seen whether or not Dwyer was utilizing them with tongue planted firmly in cheek or to give his songs a classic feel.

A SHORT LIST OF WHAT THEE OH SEES’ SONGS ARE SPECIFICALLY ABOUT: Memory loss, suffocation, the sea, the ocean, tidal waves, disappointment, loneliness, seeds, plants, trees, forests, blood (that is a big one), the sky, running, floating, falling, ghosts, dreams, ghosts in dreams, dogs, wolves, artist Maria Forde, getting fucked up, being fucked up, trying to prevent oneself from being fucked up.

An “indefinite hiatus” is not an altogether breakup; Thee Oh Sees are not exactly being carried away in a floating coffin. But for a band that has tirelessly ascended the ranks as one of the leading lights in modern garage-rock, the idea of them scattering to various points in California and quelling their almost excessive work rate is a bittersweet gesture toward the niche they helped cultivate. Sure, the garage-punk underground will continue to yield good bands who favor weirdness and unbridled creativity. Things fade away and the world keeps spinning. But Thee Oh Sees were a special band, a group that was not only extraordinarily consistent in quality (given their penchant for multiple releases — sometimes even multiple full-length albums — in a calendar year), but also maintained a very odd musical sensibility for the entire time they were a band. Few bands in the modern age had been that good and that weird for as long as John Dwyer and crew.

With Dwyer already set to release the first album from a new solo project, along with all his other endeavors (including his great photo book Vinegar Mirror and writing the theme song for Nickelodeon’s Sanjay and Craig), it is to be expected to continue to be besieged by the work of an artist whose mind and creative capabilities do not end with rock ‘n roll music. This may not even be the last we see of Thee Mighty Oh Sees; we may be witnessing the “first run” play its course instead of The End. And if that’s the case, there are a lot of us ready to welcome them back with open arms and more 1000-plus-word essays.